JEDDAH: King Salman has thanked Arab leaders for taking part in the 29th Arab Summit for their “blessed efforts.”
At the start of the Cabinet session at Al-Yamamah Palace in Riyadh on Tuesday, the king detailed the results of his meetings with Arab leaders on the sidelines of the summit, as well as his meetings with President Mahamadou Issoufou of Niger and Pakistani Prime Minister Shahid Khaqan Abbasi at the closing ceremony of the Gulf Shield-1 military exercise.
The Cabinet congratulated the king and Crown Prince Mohammed bin Salman on the summits success, and welcomed the “Dhahran declaration” and Arab leaders assertions on the importance of joint Arab action to protect the nation, maintain security and stability, and ensure a promising future for coming generations.
It praised the Arab national security document issued at the end of the summit and its commitment to enhance solidarity among Arab countries, and achieve security and stability for their peoples.
The Cabinet said the kings patronage at the closing ceremony of the Gulf Shield-1 exercise reflects the importance of military cooperation and coordination with friendly countries, and raises the level of readiness to protect the security and stability of regional countries.
Official visits by the crown prince to the US, France and Spain were highlighted. Talks with leaders and senior officials on bilateral relations and strategic partnerships, and further development of bilateral cooperation in various fields, added to security and stability in the Middle East region.
The Cabinet stressed that the appreciation offered to the Kingdom under the leadership of the king during these visits and the signing of agreements and memoranda of understanding, as well as a strong support for the Kingdoms Vision 2030 and its ongoing reforms that open new horizons and opportunities to develop the energies of the Saudi people.
The Cabinet also said that the Houthi militias targeting of the Kingdoms cities with ballistic missiles proves the Iranian regimes involvement in supporting terrorist militias — a clear challenge to UN resolutions. It praised the efficiency of Royal Saudi Air Defense Forces in destroying the missiles.
It reiterated the Kingdoms calls to end the suffering of the Syrian people and maintain the sovereignty of Syria, holding the Syrian regime responsible for the repercussions of military operations carried out by the US, UK and France in response to the use of chemical weapons against civilians. 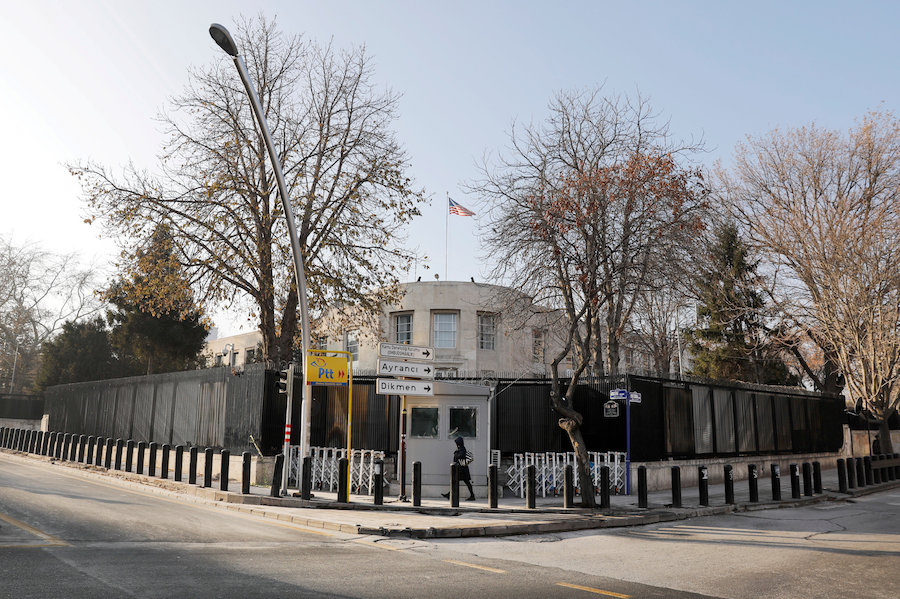 Shots fired at US embassy in Turkey amid diplomatic crisis