The Panama-registered Sanchi tanker sank Sunday after an explosion rocked it and sent flames shooting up, CCTV reported.The Sanchi was carrying 136,000 tons — around 1 million barrels — of oil from Iran to South Korea when it collided with the Hong Kong-registered CF Crystal freighter in the East China Sea on January 7. Chinese maritime authorities launched a search-and-rescue operation for the 30 Iranian and two Bangladeshi crew aboard the Sanchi. China's Ministry of Transport said the 21 Chinese sailors from the CF-Crystal had been rescued.Iran joined the international rescue effort led by China, sending a rescue team of its own, including Iranian navy commandos on speed boats. But the teams couldn't get close to the burning tanker because of the heat. 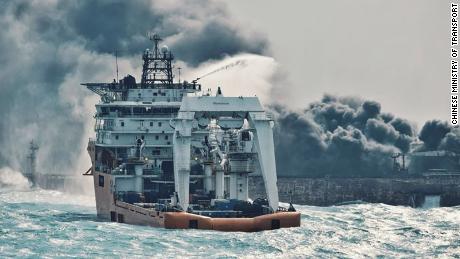 Three bodies were recovered over the week and just hours before the Sanchi's sinking Sunday. Iran announced that all the ship's crew members were presumed dead, according to Iranian state media. Iran's Special Task Force spokesman Mohammad Rastad said testimony from crew on the CF-Crystal as well as from rescue workers suggested the Sanchi's crew likely died early on from a massive blast and the ensuing release of toxic gas, state media reported.Later efforts to retrieve the bodies of the victims were hampered by back-to-back explosions on board the tanker in addition to strong winds and high waves. 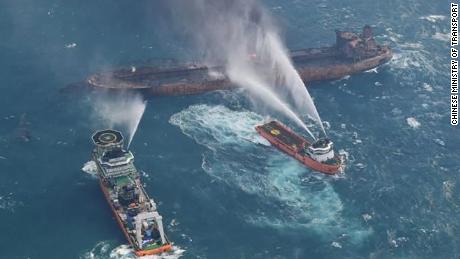 On Saturday families of the 30 Iranian crew members made emotional pleas for help, with one woman telling the semi-official Iranian Student News Agency: "My son is still under the water, who will listen to our pain?"Another woman described how just one hour before the incident her loved one called to say he would be arriving in Korea in two days. He told her, "I didn't eat my chocolates, I kept them for you." Since the initial collision, the tanker had been ablaze and drifting in the waters between Shanghai and southern Japan.China's state news agency Xinhua reported Sunday there was an oil spill where the vessel sank and that the National Oceanic Bureau is monitoring the situation closely. 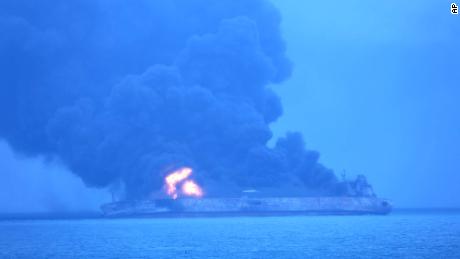 With a length of 900 feet (274 meters) and displacing more than 85,000 tons, the Sanchi is almost as big as the US Navy's Nimitz-class aircraft carriers, according to the ship-tracking site marinetraffic.com.Iran's Shana news agency reported that the Sanchi was managed by the National Iranian Tanker Company and its cargo was worth around $60 million. Shana said the oil had been purchased by South Korean customers.In a statement Monday, Paul Johnston from Greenpeace International's Science Unit warned there remains "the possibility of an oil spill." "Given that the fuel tanks in these sorts of vessels are located close to the engine room, it is likely that the fuel tanks have remained intact since the initial collision," he said.Greenpeace said the explosion and sinking of the Sanchi occurred in an important spawning ground for several species of fish and on a migratory pathway of many marine mammals, including three species of whale. Fu Pengcheng, professor of life sciences and biotechnology at Beijing University of Chemical Technology, said that it may take decades or even centuries for the contaminated area to completely recover. "Now the most important thing we need to do is to send a team of experts to evaluate the situation and try to make some appropriate plans to minimize the damage," he said.Fu said along with physically collecting spilled oil, cleanup teams may also use bacteria that will "degrade the harmful materials and then convert them to some kinds of unharmful materials so that the impact will be minimized."