Bahraini authorities have deported eight Bahrainis, having stripped them of their citizenship, since January 29, 2018, Human Rights Watch reported today.

Bahraini courts have increasingly been turning to a stronger form of intimidation to crush rebellion against the state – stripping opponents of their of citizenship. Bahraini authorities have stripped 578 nationals of their citizenship since 2012.

According to Sarah Leah Whitson, Middle East director at Human Right Watch, “Bahraini authorities have dropped all pretense of pluralism and tolerance for dissent and are clearly stripping away the citizenships of people whom they find undesirable.”

#Bahrain strips hundreds of nationals of their citizenship since 2012, rendering them stateless. Deports four over the last week to #Najaf#Iraq to uncertain futures https://t.co/k4k4Dpsj9y

In a mass trial on Jan. 31, a Bahraini judge sentenced two Shia Muslims to death and jailed 56 others on charges of “terrorism.” 47 were stripped of their Bahraini citizenship.

The supreme criminal court accused the defendants of “forming a terrorist group” to perpetrate “murders” and “attacks” against police. The public prosecution said some of the defendants were training to use weapons and even possessed bombs.

Sayed Ahmed Alwadaei, director of advocacy at the Bahrain Institute for Rights and Democracy (BIRD), dismissed the legitimacy of the proceedings, believing that the charges were either made up or exaggerated in an effort to crush dissent against the Gulf nation.

“Coerced confessions have become the norm for Bahraini courts in their deliverance of suffering to its citizens,” he said. “Authorities have further proved their willingness to exploit the vulnerability of its citizens: the lives of two men hang in the balance; women are being subjected to harsher sentences of imprisonment; and the overwhelming majority of those whose citizenship has been revoked are rendered stateless.”

Sayed Ahmed Alwadaei and other human rights activists have been warning western leaders for years of a worsening situation between Bahrain’s Sunni-led government and the island’s large Shia population. Bahraini authorities have been in a fight against anti-government protestors since February 2011, and although many of these protests have occurred in the context of the Arab Spring, authorities also believe the demonstrations are supported and influenced by Iran, which is in opposition to Bahrain and predominantly Shia.

Human rights groups see no Iranian influence, however. They say protesters are simply fighting for jobs, housing, and political power in a country that has been clamping down on dissent and demonstrations for years.

As for reactions from western leaders, Sayed Ahmed Alwadaei told the Washington Post last year that “human rights is absolutely not part of the U.S. interest” in Bahrain. According to him, that was made clear when President Trump reassured the king of Bahrain in May that there would be no “strain” in their relationship.

“There’s absolutely zero pressure for them to reform or do anything that’s less than repressive,” he said.

Of the 578 Bahrainis that have had their citizenship revoked by the courts since 2102, 72 have already been revoked this year, which would put 2018 on track to be the highest year on record. 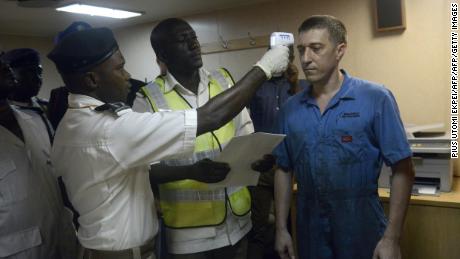 WHO preparing for worst-case Ebola scenario