Now three races into its fourth season, FE unveiled the vehicle its racers will be piloting when season five gets under way later this year.With its futuristic styling and increase in power and range, the Gen2 car further distances itself from established racing categories like Formula One and IndyCar.Young, all-electric and innovative, FE appear is the millennial of racing series.READ: "Straight outta Gotham!" FE unveils Batmobile

Being an electric racing car, Formula E is already bucking the trend in motive power. It's also challenging other motor racing taboos. One unwritten rule is that a single-seater race car should have an open cockpit and open wheels. The Gen2 is still a single-seater race car and, even with the mandatory Halo protection system designed to prevent debris hitting the drivers, it's still an open cockpit car. But, the new car no longer meets the strict definition of being open wheeled, as it partially covers the tires with bodywork. Having open wheels is a throwback to days when racing without bodywork might have saved some weight and complexity. The problem is that open wheels create over third of the cars aerodynamic drag. With FE being a category that emphasizes efficiency, enclosing the wheels in bodywork cuts drag and extends the car's range. When we look at the new car, it's clear this isn't a race car designed by studious engineers, solely focusing on form equaling function.FE is a single-make racing category, meaning teams can't make changes to the car's chassis.The car's bodywork has an aerodynamic function — creating downforce, cutting drag and feeding cool air to the radiators. But that doesn't mean it can't look Batmobile-cool at the same time. So much of the Gen2's design is style as well as function.The rear wing is effectively reduced to two tiny aero foils joined by a dramatic "V" shaped mount.Other flourishes in the shape of the add-on bodywork serve little function other than to look good. This means the unseen underside of the car creates the majority of the downforce needed to make sure the Gen2 sticks to the road through corners. The car's V-shaped rear wing also reduces drag, as a conventional rear wing is the second biggest contributor to aerodynamic drag on a race car.The cars underside, with its huge diffuser, creates down force efficiently without battery-draining drag. 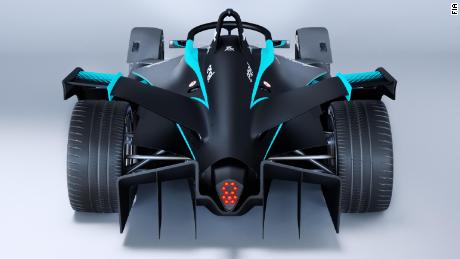 Like a road car, much of the bodywork is added to an inner chassis structure. So the Gen2 car be "reskinned" with new bodywork without a completely new car being needed. Clever, cool and efficient.FE has also thought about how the Gen2 can be a more entertaining spectacle and how it can encourage more overtaking during races. Already the lack of rear wing and the large diffuser diminish the amount of turbulence experienced by the car behind.But the Gen2 also reduces the turbulence spread out from along the cars flanks, caused by the open front wheels. Covering up the front wheels, and placing a curved vane behind them, prevents chaotic air messing up the performance of the trailing car.WATCH: Orlando Bloom crashes a race car

With FE now firmly embedded on the motorsport landscape, its proven formula allows a number of major manufacturers to join the sport for a reasonable cost.The Gen2 car will be raced by automotive institutions like Mercedes, Audi, Porsche, BMW, Jaguar, Nissan, DS-Citroen, as well as the burgeoning EV (electric vehicle) manufacturers Mahindra and NIO.Their job isn't to design an entire car, not even the battery. They provide the motor, along with the electronics hardware and software to exploit the Gen2's innovative design. This 335hp electric powertrain package bolts on to the end of the standard chassis, meaning this is the difference maker between the teams.At the heart of the car, literally, the battery sits inside the rear of the carbon fiber survival cell. The Gen2 car now has a battery supplied by McLaren Applied Technology, the offshoot of the McLaren F1 team. Through the first four seasons, the battery wasn't specified to last a full 45-minute race, instead the drivers had to pit and jump into another fully-charged car to complete the second half of the race. Not a great advert for electric vehicles. Now the battery will last the full race, meaning no pit stop to swap or recharge. The longer-range battery is a clear sign that the sport is improving the technology. In future seasons, the battery technology may be opened to competition. Given the expense of research and development and materials needed to develop cell technology, this is a step FE will take only when it feels the sport is ready for it.With the advent of the Gen2, FE continues to laud its green credentials and brings the racing spectacle into the center of some of the world's major cities. 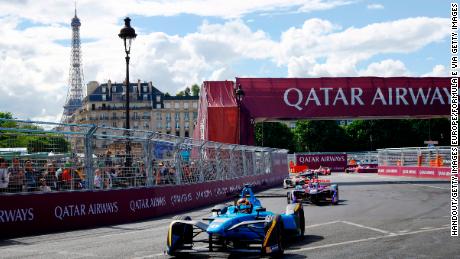 READ: Formula E partners with tech giant to "write the future"It's also not conforming to the status quo, making changes to suit its agenda rather than sticking to what's always been done in the past.FE achieves the balance of making the car and the racing exciting with careful design, while encouraging major manufacturers to race electric cars at a manageable cost. The Gen2 car will make its public debut at the Geneva Motor Show on March 6.The world is waiting.

Behold the race car of the future