ISTANBUL, Turkey – Drivers of Uber cars and their passengers are “terrorists” and no different from Islamic State, an Istanbul taxi representative has said, as attacks on the transport company continue amid its popularity.

“Uber is the same as the PKK, the same as Deash," said Irfan Ozturk, the head of the Istanbul taxi drivers association, on Thursday. "It is officially terrorist." ("Deash" is the Turkish pronunciation of the Arabic acronym for Islamic State.)

“Uber was born in San Francisco, the place that produces the traitors who fire at my soldiers in Afrin and martyr them,” Ozturk said, a reference to Turkey's military incursion into the northern Syrian region of Afrin, where it has come up against the US-backed Syrian-Kurdish YPG militia although there has been no direct Turkish-US clash. “Both those who drive Uber and use it are traitors.”

Uber had yet to respond to questions from Middle East Eye at time of publication.

Uber spots gap in the market

Turkey's biggest city, has an estimated population of 16m but only around 17,000 taxis and near 24-hour traffic gridlock, making drivers extremely picky about which routes they want to drive. 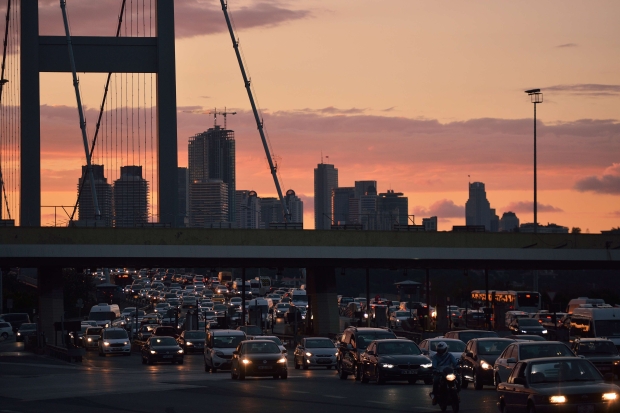 Istanbul has an estimated population of 16m but only around 17,000 taxis (AFP)

City residents often complain about the rudeness, if not outright aggressive behaviour, of the drivers of the distinctive yellow taxi cabs. Stories of drivers using the longest routes to charge passengers extra are common.

In a landmark ruling on Thursday, a taxi driver who conned a Saudi tourist by driving all over the city instead of taking the passenger straight to the airport was sentenced to a 15-month prison term.

No surprise then that Ubers popularity in Istanbul is growing as customers make use of more comfortable rides at lower prices (at present the company only offers its Uber XL service, which in Istanbul means larger Mercedes people carriers).

Uber has faced demonstrations from taxi drivers worldwide, including in London, Paris and New York, while some authorities have discussed banning the service.

But protests have rarely descended to the levels of physical violence against its drivers as seen in Turkey, including one incident which involved a firearm.

On 10 March, media reported that four rounds of live ammunition were fired at an Uber car in an Istanbul suburb. The driver was sat in the vehicle at the time.

At least 30 cases of attacks against Uber drivers – some of them while they were carrying passengers – have been reported so far this year.

In many cases, taxi drivers posing as customers order an Uber and then attack the driver, although Eyup Aksu, the head of another taxi driver association, in March claimed all these attacks were staged by Uber drivers and vowed not to let them operate.

The cost of a taxi licence

Many believe that the real problem for Istanbul's taxis is the licensing system. Vehicle registration number plates for yellow taxis sell for around 1.6m Turkish lira ($390,000).

They are often owned by people who often dont drive the taxis themselves and who instead rent them to hired drivers for a fixed amount. The result is a micro economy on which thousands of families are reliant.

Both the government and the CHP, Turkeys largest opposition party, have sided with the taxi drivers against Uber. Several CHP MPs have even joined taxi drivers in their protests. 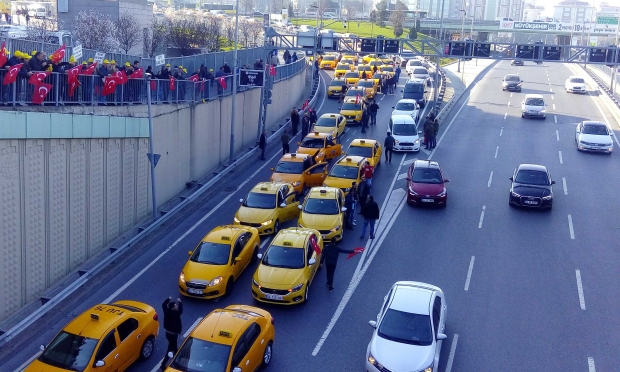 Taxis demonstrate against Uber in Istanbul in March 2018 (AFP)

Critics have slammed such support from politicians, saying they only do it because the taxi drivers are well organised, making it easier to court their votes.

Istanbul also has hundreds of private mini-cab operators, who offer cheaper fixed-rate services compared to the metred yellow taxis operating, which charge according to the meter.

But private mini-cab operators have been banned for more than a decade, with severe financial penalties for drivers and their customers.

Istanbuls taxi associations say that the government should similarly treat Uber as a private cab operator. They also claim Ubers permit only allows it to provide transfer services between hotels and airports and that it is violating the law by acting as a general taxi service. In response, Uber drivers say they pay taxes and are not violating any laws.

Uber is not the first internet technology-based firm to run into problems in Turkey.

A court has banned Dutch-based hotel booking app Booking.com from listing Turkish hotels on its website since 30 March 2017. The ruling came after pressure from travel agencies and related firms that couldnt compete.

But smaller, often family-run, boutique hotels say the ban has lost them business. Turkish economic officials have said they are open to negotiation: one demand is that Booking.com opens an office in Turkey.

'If what Uber does is not treason, what is? “People have converted their foreign currency so that the lira doesnt depreciate'

The longer-term impact of the criticism of Uber and Booking.com on future foreign investors in the Turkish market remains to be seen.

Turkish authorities have increased their efforts to reassure foreign investors that Turkey is an ideal prospect destination at a time when the Turkish economy has begun to falter.

The Turkish lira has hit all-time record lows over developments in the region, including rising US-Russia tensions after the suspected chemical weapon attack by the Syrian government in Douma.

But for Ozturk, Uber is a global thief that commits treason, taking, slicing off 20 percent of each fare and sending it overseas.

Such action, he says, runs counter to government campaigns, which called on Turks to sell their foreign currency to boost the lira.

“If what Uber does is not treason, what is?” Ozturk asks. “People have converted their foreign currency so that the lira doesnt depreciate. There is no need for this global thief Uber, both its users and drivers, to shed crocodile tears now”.