No one knows more about leaders bodies than their personal physicians. Notoriously, Joseph Stalin mistrusted the Kremlin doctors, whom he suspected of trying to poison him and the other Soviet magnates. In February 1953, a month before Stalin passed away, they were arrested and horribly tortured. The ones still left alive were too terrified to treat him as he lay dying in March.

An avowed Stalinist, the late Romanian dictator Nicolae Ceausescu held a different vision for his medical entourage. Not only did he trust his doctors, he also made one of them — professor Theodor Burghele — the countrys minister of health. Even by the standards of Romanian dictatorships, this was new. So as U.S. President Donald Trump taps the White House physician to head the Department of Veterans Affairs, a vast and sprawling bureaucracy, he might want to brush up on some recent Romanian history.

Its not that Burghele, the former rector of the respected Bucharest Institute of Medicine and Pharmacy (the countrys top medical school), was not a capable person. He was, but his administrative experience was limited to a small-size bureaucracy. He was said to be an excellent urologist, a decent person and a respected professor. As a surgeon, he was highly regarded. But the Ministry of Health was a different business. What Ceausescu wanted to emphasize with such an appointment was that human life was a state affair and that he, as the supreme leader, could sweep aside any past criteria of administrative competence. According to our sources, Dr. Burghele was quite reluctant to accept the ministerial job, but no one in the Securitate-controlled regime could say NO to Ceausescu without facing unpleasant consequences. So, Burghele said yes and served between 1972 and 1975. During this period, he reluctantly complied with Ceausescus increasingly erratic orders and eventually, he resigned.

Another telltale case was Dr. Iulian Mincu, Ceausescus last personal doctor, whom he entrusted with designing the notorious Rational Nourishment Program, a set of draconian policies imposed in the 1980s to justify starvation in the name of medical progress. Ersatz food (adulterated oil made from unrefined soy, fake cheese fluffed up with flour, dregs of meat like chicken claws, fake coffee called “Nechezol,” and so on) proclaimed superior to natural products. In the meantime, the regime could export food for hard currency. For instance, one ration card for one person in the city of Galați, eastern Romania, from the late 1980s contained: Bread — 300gr/daily; poultry — 1 kilo/month; pork or beef — 500gr/month, or meat cans from Czechoslovakia or the Soviet Union as replacements; other meat products (salami, sausages, usually made of soy) — 800gr/month; salted cheese — 500gr/each trimester; butter—100gr/month; oil — 750ml/month; sugar — 1kilo/month; corn flour — 1 kilo/month; flour—1kile/each semester; eggs — 8 to 12/month; and a supplement for hard workers, meaning 300 more grams monthly for diverse products.

In spite of his dismal record — including a deliberate concealment of HIV and AIDS data in the 1980s — Dr. Mincu was resurrected after the Romanian December 1989 revolution as Minister of Health under the reign of Ceausescus authoritarian successor, Ion Iliescu. During a research interview in 2007 conducted by one of this articles authors (Marius Stan), Mincu stood by his bizarre food ideas and denied any wrongdoing. 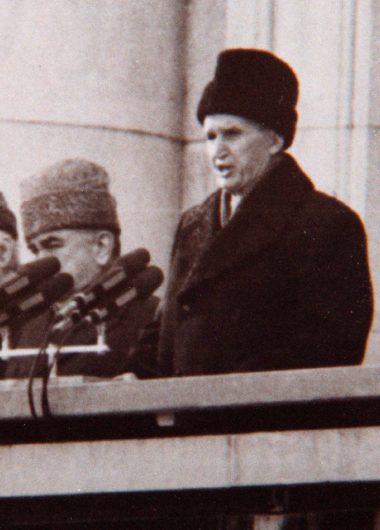 One of the lessons from these two Romanian stories is that expertise matters decisively. Another is that proximity to the leader (even if he or she is democratically elected, as Trump was) does not qualify one for running huge bureaucracies in need of urgent overhaul. Managing complex organizations is a skill in its own right. Putting someone unqualified in charge of a massive system such as the Romanian Ministry of Health could lead to amateurism, improvisation and, eventually, mission failure. In our case, it did — twice.

This seems to be the case right now in Washington: A person with impressive credentials in terms of running small medical units, Dr. Ronny Jackson, has suddenly been catapulted to the top of a government agency dealing with veteran affairs — thanks in no small measure, it seems, to his robust defense of Trumps personal health. Yet taking the presidents blood pressure or even performing surgery, the Romanian case suggests, has nothing to do with being in charge of major institutions that affect the lives of millions. Ceausescu was certain that personal loyalty to him was the most important quality of any top official. He shared this illusion with most of the last centurys dictators. Is this now a litmus test for promotion in the Trump administration? At the end of the Ceausescu regime, the Romanian health system was a complete disaster. Intrahospital infections and scarcity of medical drugs were rampant. Doctors salaries were miserable and, in order to increase their incomes, many expected to be paid with Kent cigarettes, whiskey, and other coveted goods. As a result of the restrictive reproductive health policies enforced under the 25-year Ceausescu dictatorship, Romania ended the 1980s with the highest recorded maternal mortality of any country in Europe — 159 deaths per 100,000 live births in 1989.

One can only hope Americas veterans will fare better. For Ceausescu, such promotions meant an assertion of his autocratic ruling style. Like Italys Benito Mussolini, he saw himself as the successor to Roman emperors. And, as we know, Caligula could appoint anyone to any position, even the Roman Senate. On the other hand, no one is ever better placed than a personal doctor to subvert the tyrants glorious self-image with a few well-placed details — see Li Zhisuis devastating critique of Mao Zedong as a manipulative egomaniac who boasted about his unorthodox sexual appetites. Dare we quote William Gladstones suddenly apt admonition? “The disease of an evil conscience is beyond the practice of all the physicians of all the countries in the world.”

Marius Stan is research director of the Hannah Arendt Center at the University of Bucharest. Vladimir Tismaneanu is professor of politics at the University of Maryland, College Park. They have a co-authored book coming out from Cambridge University Press in May 2018, Romania Confronts its Communist Past. Democracy, Memory, and Moral Justice.