He has produced one regal performance after another since his summer arrival at the English Premier League side. But of all his magnificent exploits this season, the 25-year-old's crowning glory arguably came on a floodlit Champions League night at Anfield Tuesday.Follow @cnnsportAgainst Roma, his former employers, the Egyptian was scintillating, putting Liverpool on the brink of the final and putting on a show that will be talked about by the Liverpool faithful for generations to come. Two goals — his 42nd and 43rd goals of a spectacular season scored — as well as two assists. Roma battered 5-2 in the first leg of the semifinals thanks to the man they sold to their opponents for what now feels like a trifling £34 million ($47m). READ: A day in the life of Mo Salah MATCH REPORT: Salah shines as Liverpool run riot "Without doubt the best player on the planet right now," was how former Liverpool captain Steven Gerrard, working as a pundit for BT Sport, described his former team's star man. "A phenomenal player," said another ex-Liverpool star, Robbie Fowler, of the one-time Chelsea winger, while Liverpool manager Jurgen Klopp exclaimed: "What a player!"Social media, too, was awash with posts of praise for a player whose sniper's calm in front of goal has elevated his team to another level. "You don't need to be a Liverpool fan to love Mo Salah. You need to be a football fan …" tweeted Muhammad Syukri, while JAB posted: "Struggling to find the words to describe Mo Salah, the boy's insane!!"

Already crowned the Professional Footballers' Association Player of the Year, there are those who believe Salah should be a shoo-in for October's prestigious Ballon d'Or, an award which has only been placed in the hands of either Real Madrid's Cristiano Ronaldo or Barcelona's Lionel Messi since 2008. Is Salah the best player in the world? How does his season compare with that of Ronaldo and Messi's — the dominant forces of the last decade?In Europe's top five leagues, no player has scored more than Salah. in 47 games, the Egyptian has netted 43 times, while Ronaldo has 42 goals in 39 games and Messi is currently third in the charts with 40 goals in 50 games.

There is no doubt that Salah's season's statistics are impressive, but he must, of course, recreate such form for many seasons to come if he is to match the influence of Messi and Ronaldo, scorers of 100 and 121 Champions League goals respectively. As Klopp himself said following the first-leg victory over Roma: "To be the best in the world maybe you have to do it for a longer period."

A season to remember

But like Ronaldo and Messi, Salah has produced when it matters this season. He has scored against top sides — twice against Roma, three times against English Premier League champions Manchester City and twice against top-four rivals Tottenham. And there are even more stats to salivate over. Liverpool's new hero is closing in on Ian Rush's Liverpool record of 47 goals in a season, a feat the Kop's old darling achieved in the 1983-84 season, while he is only the fifth player in Premier League history to be involved in more than 40 goals in a single season (33 goals, 10 assists). With at least four games remaining before the season ends, the odds are in favor of the "Egyptian King" scoring more goals, breaking more records and having greater plaudits thrown in his direction.Should he lead Liverpool to the Champions League final on May 26, against either Real Madrid or Bayern Munich, and help the Reds to a sixth European Cup he will also be mentioned in Liverpool folklore. But should he not even add to his scoring tally in the remainder of this season, the Egyptian's claim to being the best player in the world on current form is already a strong one. "He is in outstandingly good shape. He is a fantastic player that we are really happy to have," added Klopp after the Roma victory.

Meanwhile, Roma have described the behavior of some of their fans before Tuesday night's match against Liverpool as "abhorrent".A 53-year-old man was said to be in a critical condition and Merseyside Police have said two men from Rome have been arrested on suspicion of attempted murder for the attack outside Anfield. In a statement, Roma said: "AS Roma condemns in the strongest possible terms the abhorrent behavior of a small minority of traveling fans who brought shame on the club and the vast majority of Roma's well-behaved supporters at Anfield after getting involved in clashes with Liverpool supporters before last night's fixture."There is no place for this type of vile behavior in football and the club is now cooperating with Liverpool Football Club, UEFA and the authorities."The club's thoughts and prayers are with the 53-year-old Liverpool fan in hospital and his family at this time."Merseyside Police said nine men, aged between 20 and 43, were arrested for various offences before and after the Champions League semifinal. Chief superintendent Dave Charnock said in a statement: "During one incident a 53-year-old man, believed to be a Liverpool fan, was assaulted near to the ground during what is believed to have been an altercation between Roma and Liverpool fans. "He is currently being treated for his injuries at Walton Neurological Centre, where his condition is described as critical. "Two men, aged 25 and 26 years from Rome, have been arrested on suspicion of attempted murder and have been taken to a police station where they will be interviewed by detectives."

Congo warlord acquitted of war crimes to be released 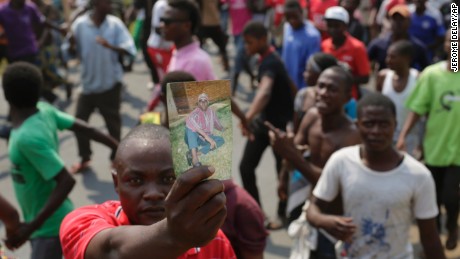