Amal Fathy, an activist focusing on democratization in Egypt, was arrested alongside her husband — Mohamed Lotfy, director of the Egyptian Commission for Rights and Freedoms (ECRF) — early Friday, Amnesty International said.Police raided the couple's home in the Cairo suburb of Maadi at 2.30 a.m. Friday (8.30 p.m. ET Thursday) and took them and their 3-year-old child to the police station, Amnesty said in a statement.Lotfy and the child were released after three hours but Fathy was kept in detention, with police saying a prosecutor needed to examine her case, Amnesty said.A lawyer from the ECRF said a prosecutor later ordered her detained for 15 days on "on charges of incitement to overthrow the ruling system, publishing lies and misusing social media," the Reuters news agency reported.

"On Wednesday, Amal had posted a video on her Facebook page in which she spoke about the prevalence of sexual harassment in Egypt, criticizing the government's failure to protect women. She also criticized the government for deteriorating human rights, socioeconomic conditions and public services," Amnesty said.Egyptian authorities detained Fathy, 33, for damaging the government's reputation by posting the video on social media, according to the state-run Ahram news agency.Reuters quoted an Egyptian security source, who said "she is accused and wanted for arrest in relation to complaints accusing her of insulting the Egyptian state, by publishing a posting that contained swearing and defamation against Egypt."Amnesty said it had examined the video and that it did not contain incitement but that "pro-government and state-owned media outlets" had accused Fathy of insulting Egypt and its institutions and identifying her as an activist in the April 6 movement. The protest group was involved in the 2011 overthrow of Hosni Mubarak and is now banned in Egypt.

"Since yesterday (Thursday), she has received a wave of harassment and threats on social media, including gender-based insults and calls for her arrest," Amnesty said."Amal Fathy criticized the Egyptian government for failing to protect women, and her arrest has shown just how pertinent her concerns are. It is a dark day when the Egyptian authorities are more concerned with silencing a woman who speaks out about sexual harassment than taking steps to address the issue," Najia Bounaim, Amnesty's campaigns director for North Africa, said in calling for her release.The group said Lotfy formerly worked as a researcher for Amnesty before heading the Egyptian Commission for Rights and Freedoms.Amnesty said staff from the ECRF had "frequently been targets of government harassment" and that authorities in 2015 confiscated Lotfy's passport for two years as he tried to fly to Germany.

The ECRF posted what appeared to be the details of Fathy's case on Facebook, saying she was arrested for three reasons: that she posted a video on Facebook and used social media as a tool to "hit the government in the heart;" that she used Facebook to post lies and that she misused social media.In a separate statement posted to Facebook, it said security forces broke into Fathy and Lotfy's house: "They were put under severe pressure, their house was searched, their mobile phones were seized and they were denied the right to communicate with a lawyer or family."The ECRF alleged that it was the actual target of Fathy's arrest."This is the seventh time the Egyptian Commission for Rights and Freedoms and its management suffer from intimidation and persecution by the hands of an Egyptian security body. Last night however, is considered a precedent in the practices used by the security to hamper the work of human rights organizations, by targeting the executive director's wife who remains in custody," it said.

"It is important to mention that ECRF works on documenting cases of particular concern for the security authorities concerning torture in prisons, enforced disappearance, and the fact that ECRF's board director is Giulio Regeni's family legal consultant," the statement said, referencing the Italian student found dead in Cairo in February 2016. Investigations found that he had been tortured before his death."It is shameful that this is how the security authorities choose to deal with ECRF one week before the Italian technical visit to Egypt aiming at inspecting the content of the video cameras in the metro stations," it said.Regeni's death sparked outrage in Italy, with Rome recalling its ambassador to Cairo in April that year after a meeting between Egyptian and Italian investigators reached a deadlock. Italian officials have questioned the various explanations Egypt has offered for Regeni's death and magistrates from the Public Prosecutor's Office in Rome are due to visit Cairo over the case.

Censorship watchdog Index on Censorship said Friday's raid targeted "one of the last human rights organizations in Egypt.""It is shocking how the lives of people who are working to make public information about torture in Egyptian prisons and other human rights violations are being threatened," it said in a statement."Obviously the intention of this action, and others, is to stop the incredibly brave members of staff at this organization carrying on with their important work. Index calls on governments around the world to put pressure on Egypt to release Amal Fathy and to shine a spotlight on the Egyptian government's frightening tactics to stop the public knowing what is going on in that country," Rachael Jolley, editor of Index on Censorship, said.

WHO preparing for worst-case Ebola scenario

She stabbed her husband as he raped her 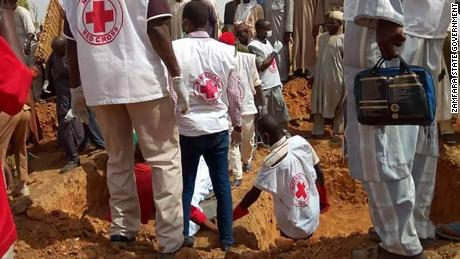