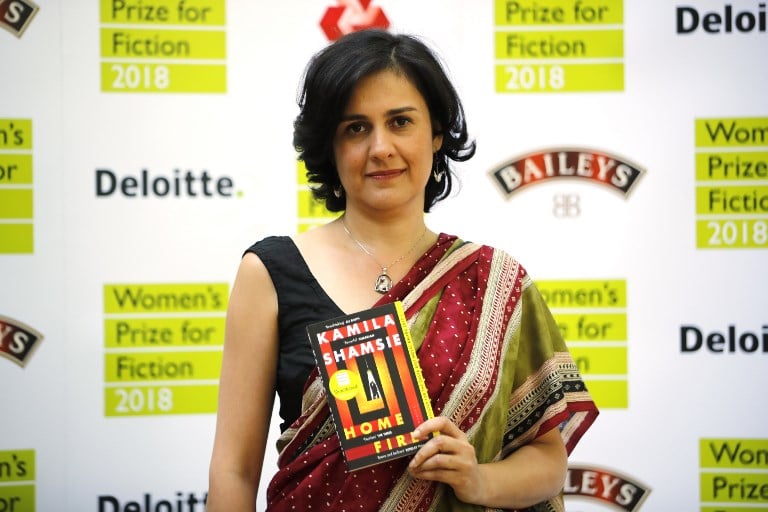 Kamila Shamsie, winner of the 2018 Women's Prize for Fiction, poses at the awards ceremony in London on 6 June 6 (AFP)

Home Fire, a novel by Kamila Shamsie exploring themes of identity and the impact of counter-terrorism policies on British Muslim communities, last week won one of the UK's most prestigious literature prizes, the Women's Prize for Fiction.

The novel is set in a contemporary Britain in which a British-Pakistani home secretary has distanced himself from his Muslim heritage – “Mr British Values. Mr Strong on Security. Mr Striding Away From Muslimness” – and burnishes his populist credentials by lecturing Muslims about how they should dress and what they should think.

It tells the story of a family of three siblings, older sister Isma and twins Aneeka and Parvaiz, who have grown up in the shadow of an absent father, a veteran fighter in conflicts from Bosnia to Afghanistan who died aboard a US military plane while being transported to Guantanamo Bay, and the impact on their lives when Parvaiz falls under the influence of an Islamic State (IS) recruiter and absconds to Syria.

Loosely inspired by the ancient Greek drama Antigone, judges said that Home Fire “spoke for our times”. Middle East Eye spoke to Shamsie about the novel and the themes that inspired it.

MEE: Who were the inspirations for the figure of Karamat Lone, the home secretary in Home Fire?

Kamila Shamsie: Well, the idea for the novel started with the 2,500-year-old play Antigone. So I suppose the first inspiration was the tyrant, Creon, in it. While trying to think of how to re-work that for a contemporary story, I thought of a home secretary who was Muslim and also a “tough on security” Tory. I didnt at first think it possible – this was early in 2015 – to pull off the idea of a Muslim home secretary, but then I thought about the trio of Sajid Javid, Sadiq Khan, Sayeeda Warsi, and realised that it probably was only a matter of time before one of them stepped up to the next level in terms of political power.

I was struck by the fact that all three were the children of Pakistani migrant bus drivers, with quite different relationships to their Muslim background, with Javid the one who most distanced himself from that. And it struck me that a similar distancing would probably be useful, if not necessary, for anyone with a Muslim background who might have hopes of being put in charge of security matters. Beyond that, I didnt really go and try to find out too much about any of them precisely because I wanted Lone to be my own creation.

Sajid Javid: How far have we come?

MEE: Some have seen prescience in your novel since Javid's appointment as home secretary. What is your impression of him?

KS: What do I think of Javid? His politics are not mine at all. But I ended up feeling far more sympathetic to Karamat Lone once I got inside his head, so I sometimes wonder if I would feel the same way about Javid. It wouldnt change the fact that I dont much like his politics, and find it distasteful that he distances himself from Islam, except when he can claim Muslimness to defend the Tories against accusations of Islamophobia.

MEE: There is a very compelling account in the novel of how Parvaiz is influenced by a charismatic Islamic State (IS) recruiter. Some might call this radicalisation, a concept around which an entire preventative industry has emerged. But there is also scepticism about this term. What are your thoughts about this, and how did you want to portray this process in the book?

KS: I think of Parvaiz as being groomed rather than radicalised. I really wanted to show how slick the recruitment process can be, how recruiters know how to exploit vulnerabilities – around belonging, masculinity, sense of purpose etc. Until we really look at the things that recruiters are targeting, we arent going to be very good at knowing how to counter it. And I think Britain does need to think hard about why some of its citizens so lack a sense of belonging. Its always discussed in terms of the failure of migrants to assimilate – but the treatment of British Muslims as a suspect minority must be part of the conversation.

MEE: Parvaizs obsession with recording soundscapes [He joins IS to be an audio engineer in the group's media wing] is very interesting. It gives him a child-like quality in contrast to the world of violence that he is sucked into. Most media coverage of IS fighters tends to treat them as monsters. How important was it to you to portray him with these sympathetic qualities?

'I wasnt interested in telling the story thats been told a million times: angry young Muslim wants to go and indulge his violent side'

KS: I wasnt interested in telling the story thats been told a million times: angry young Muslim wants to go and indulge his violent side. I dont doubt thats true of some, particularly those who become fighters. But Daesh was trying to build a state – it wanted to get doctors and engineers and media professionals to join. That was the story that interested me: how do people who didnt want to be part of the violence still get lured to the so-called Caliphate. And I was struck by the fact that so many who went were teenagers – for us to write them all off forever, and decide they were evil rather than groomed or exploited, didnt sit easily with me.

MEE: The British-Pakistani community, along with other Muslim communities, was sending convoys of aid into Syria for the first few years of the war, with many volunteers visiting rebel-held areas of the country or camps in Turkey before the government shut the convoys down. What was it about the Syrian conflict in particular that energised communities?

KS: I dont really know that I have an answer to this as I was unaware that the Syrian conflict energised the British-Pakistani community more than other conflicts. I would be surprised if there was a stronger response there than to conflicts in Kashmir or Afghanistan, which are neighbouring countries.

MEE: You draw a line of British-Pakistani involvement in Islamist militant movements from Bosnia, Kashmir and Afghanistan through to Syria. Do you think there was a moment after 9/11 when something that had been tolerated by the British government previously was no longer acceptable?

KS: Lets draw the line further back. In the 1980s jihad was seen by the US and its allies as very useful in opposition the Soviets, particularly in Afghanistan. (The idea of Islam as a form of resistance to Communism went beyond Afghanistan of course, given how many Soviet states had formerly Muslim populations.) So the word jihad had more of a connotation of freedom fighter than terrorist back then. When British Muslims were going off to fight in Bosnia, I dont think anyone saw that as problematic. Its really only when jihad turns on the US and its allies that it becomes a dirty word, and the idea that one jihad might be in the way of justice and the other may not completely disappears from Western vocabulary.

MEE: There is a lot of debate about what should happen to British citizens (some now stripped of citizenship) suspected of being ISIS members or sympathisers and now stuck in prisons in Iraq and Syria. What are your thoughts about this?

KS: My thoughts are, of course, its complicated, but a liberal democracy has to hold on to ideas such as due process, equality before the law etc. A nation has to take responsibility for its citizens and find ways to deal with them according to its own laws. This doesnt mean Im saying everyone should be allowed to waltz back in, and the intelligence agencies should have no role in whats going on, but we cant just say, “youre a suspected sympathiser so youre going to rot in someone elses prison and we wont have to deal with you”.

Im strongly against the idea of democracies letting go of the things that separate them from dictatorships. “Youre guilty because we think you might be guilty” is not how we ever want to proceed.

MEE: Middle East Eye has reported on the cases of a number of British citizens who were involved in aid work in Syria but are now stripped of their citizenship and unable to return. But the stories are difficult to tell in detail because of legal issues. In the UK we find many people are wary to talk about issues relating to counter-terrorism, Prevent etc. because Muslim communities feel under suspicion. How important is it to tackle these issues through literature and culture?

KS: In 2016, the writer Gillian Slovo wrote a verbatim play Another World: Losing our children to Islamic State which was performed at the National Theatre. She found it impossible to talk to the families of those who had gone to join Daesh [IS], because of the legal issues you mention (she ended up travelling to Brussels, where there were support groups for such families). I was already working on Home Fire and it struck me that if people feel they cant tell their stories in any kind of non-fiction forum then it places an extra sense of urgency for writers and artists to take these matters up. 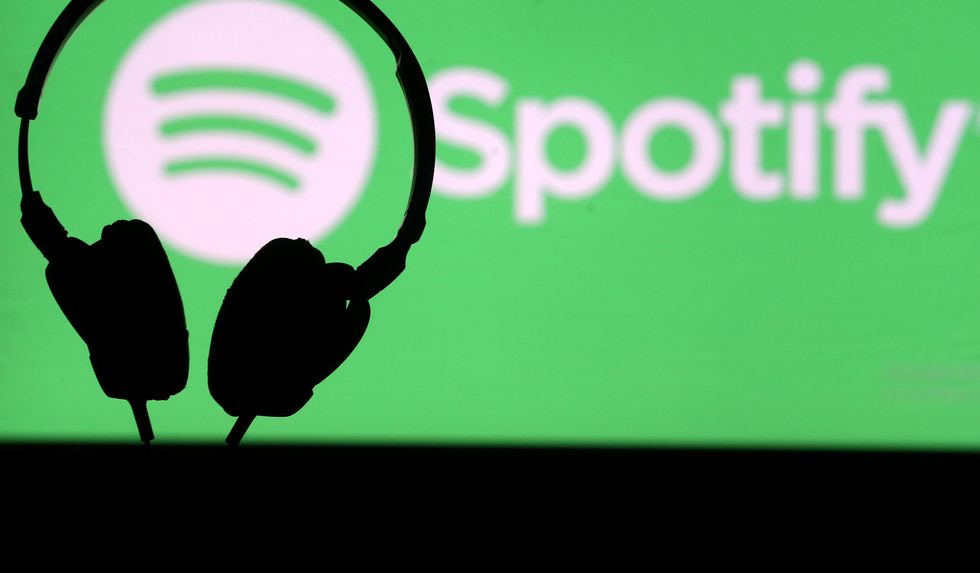