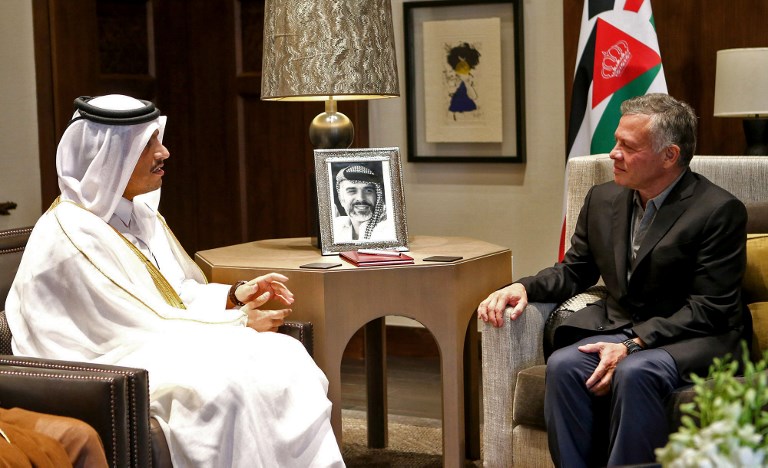 Return of Qatari ambassador to Amman? Not so fast

A Jordanian official dispelled rumours of an imminent return of the Qatari ambassador to Amman, news site Arabi21 reports.

Despite reports claiming that he will return, the government source told Arabi21 that the ambassador's presence depends on the Gulf crisis and improvement of the relationship between Qatar and Saudi Arabia.

Jordan expelled Qatar's ambassador to the kingdom last June as the blockade enforced by Saudi Arabia, the United Arab Emirates, Bahrain and Egypt against the emirate began.

During a visit to Amman on Wednesday, Qatari Foreign Minister Mohammed al-Thani announced that Doha had offered $500m in aid for infrastructure projects and would generate 10,000 jobs for Jordanians.

The aid announcement resonated with Jordanians on social media who demanded the return of the Qatari ambassador. Political parties and members of parliament have also called for the resumption of diplomatic ties.

Jordanian MP Khalil Atieh said on Facebook: "There is no excuse for the ambassador of the sister nation, Qatar, to stay away from his family and Jordanian fellows."

He added: "Qatar, the sister nation, has expressed its respect for the principled and national position that Jordan has adopted concerning the Palestinian issue, and supported the honourable Hashemites' guardianship over our holy sites in Jerusalem.

"The honourable positions of the Qataris supported the steadfastness of the Jordanian people to confront the targeting of their nation and unity. Therefore, there is no justification at all for delaying the return of the ambassador of Qatar to his work among his family and loved ones."

Protesters in Tunis called for the UAE ambassador to be expelled on Thursday following a report earlier this week alleging that the Emiratis have been planning a coup attempt in the country, London-based al-Quds al-Arabi reports.

Chahed fired Brahem last week after a boat carrying migrants sank off the Tunisian coast, leaving 68 people drowned. A government statement gave no reason for the sacking, but an official, speaking on condition of anonymity, said that he was fired for failing to stop illegal migration.

Demonstrators along Habib Bourguiba Street at the centre of the capital on Thursday called on the government to reveal who was involved in the alleged plot.

Tunisia, they said, cannot "import coups and dictatorships from Saudi Arabia and the UAE", and said that the army and security services will protect the country's revolution, al-Quds al-Arabi reported.

Mohsen Marzouk, former member of Nidaa Tounes who left to form the Tunis Project movement in late 2015, told al-Quds al-Arabi that the coup was a "foreign fabrication".

IS 'wake-up call' in east Syria

The Islamic State (IS) group has resumed its activity in Syria over the past few weeks in what Asharq al-Awsat describes as a wake-up call to the group's sleeper cells.

Experts told the Saudi daily that the way the group has resumed its battles suggests it is gradually turning into an "upgraded" version of al-Qaeda.

IS is currently fighting against the US-backed Syrian Democratic Forces on the eastern bank of the Euphrates River, and against Syrian government forces and their allies near Deir Ezzor.

Riad Kahwaji, head of the Institute for Near East and Gulf Military Analysis (INEGMA), told Asharq al-Awsat: "IS has moved to a stage similar to al-Qaeda, but fiercer."

Saudi Arabia, the UAE, Bahrain, and Kuwait voted against Morocco's bid to host the 2026 World Cup on the eve of the opening of the sporting event in Moscow.

The four countries voted instead for united bid shared by Mexico, Canada and the US during the FIFA General Assembly held in Moscow on Wednesday, while Qatar and Oman supported Morocco, according to the Kuwaiti newspaper al-Rai.

"The vote of the Kuwaiti Union against Morocco's candidacy for hosting the 2026 World Cup, does not represent the Kuwaiti people," Tabtabaie said.

"I will question the minister of sports in the parliament in order to find out how this decision has been made. Such a decision violates Kuwait's foreign policy that has always been supportive of the Arab brothers in all fields including sports."

The Middle East and the World Cup: 15 moments which defined the game