India had its first brush with the virus in May, when three people were reported to have died from it. Health officials soon moved swiftly to identify and quarantine anyone who might have had contact with those people. In total, 19 people were infected; the last two people who were infected but recovered were released from the hospital last month. "We are in a celebratory mood," said Rajeev Sadanandan, additional chief secretary for the state's Department of Health and Family Welfare.Those celebrations were accompanied by a music video, released by a group of local artistswhose aim was to show the unity of the people of Kerala.The video was shot over three days, and all the artists provided their services for free, said the video's director, who goes by the name Regilesh Star Voice."During the period of the Nipah virus, a majority of the local people were feeling lonely, and everybody was afraid. We made this music video dedicated to the public to show how proud we are of having tackled this crisis," he said.The video shows locals enjoying their everyday lives, going to malls and working in markets, a marked change from the subdued condition of the past two months. Young girls dance on the streets, and older men sit and chat in restaurants. 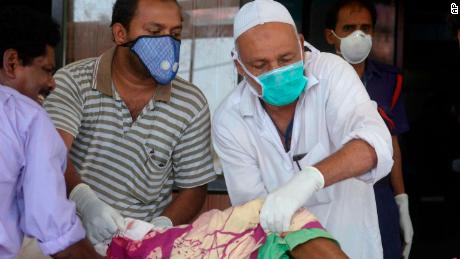 Kerala's first run-in with the Nipah virus came when the brother of the person considered patient zero was admitted to a hospital May 16 in Kozhikode, a city in northern Kerala. The attending neurologist, Dr. Jayakrishnan Chellenton, became suspicious after noticing the patient's high blood pressure and realizing that his brother had died after showing similar symptoms, and raised his concerns with the neurology team.The symptoms were different from the usual cases of encephalitis — inflammation of the brain — that come their way. The team immediately sent samples to a virology lab in Manipal, about 300 kilometers (186 miles) away. "We felt that we are seeing something that is not commonly seen," Chellenton said. Chellenton, who likes to read medical books and articles in his free time, recalled an article he had read a week prior detailing the different cases of encephalitis in India and making a passing mention of the Nipah virus.Infection with Nipah can cause a range of symptoms including fever, headache, confusion and disorientation. More severe symptoms include acute respiratory syndrome, in which the lungs cannot get enough oxygen to the body, and fatal encephalitis.People can get the virus from contact with infected bats, pigs or humans. 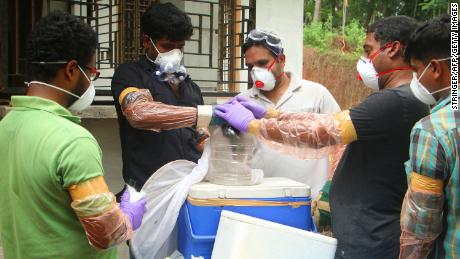 Virologist Dr. Arunkumar Govindakarnavar at the Manipal Centre for Virus Research was first to assess the samples from Kerala.His lab had been equipped to test for the Nipah virus in August by the National Centre for Disease Control under the global health security agenda. As the samples were being tested, Chellenton and his team at the hospital began examining and cataloging the symptoms. "By the process of exclusion, this was the only virus that could satisfy the symptoms of the patients," he said.By the next day, even they were convinced that they were dealing with the Nipah virus, and as they quarantined the patient, two more victims were admitted.Govindakarnavar unofficially confirmed the Nipah virus and forwarded the samples for further testing. "That was the key in the success. Within 12 hours of the samples reaching the lab, we diagnosed it. That was the key in the containment."With the foresight of Chellenton's team and the rapid isolation of the patients, no one in the hospital was infected. A nurse at another hospital, Lini Puthussery, contracted the virus while taking care of patients and died."This experience has taught us to be more cautious while dealing with patients. We never thought that we would have something like this in India, especially in Kerala," Chellenton said.Chellenton's hospital received five patients infected with the virus, and none of them survived.

Trump administration to bar Chinese passenger carriers from flying to US: Sources