Former President Robert Mugabe's wife was accused of assault after an alleged attack on South African model Gabrielle Engels in a Johannesburg hotel room last August.However, she was granted diplomatic immunity by South Africa's former Minister of International Relations and Cooperation Maite Nkoana-Mashabane, allowing her to leave the country.Nkoana-Mashabane said the decision was to maintain good relations with Zimbabwe. The Mugabes were in South Africa to attend a regional leaders' summit in Pretoria.Engels said Mugabe hit her with an electrical cord in a hotel room in the presence of her sons, an allegation Mugabe denies. But the court on Monday said the decision to grant Mugabe immunity was inconsistent with the country's constitution, a ruling that has been applauded by Afrikaner rights group AfriForum and the opposition party Democratic Alliance who brought the case to the court last year."We are elated, it's a win against efforts in South Africa to use our political and legal system to protect people that should not be protected," AfriForum's Chief Executive Officer Kallie Kriel said."Mrs. Mugabe got diplomatic immunity simply because of her surname. We hope that the NPA will do their job and go ahead with prosecution."The ruling comes as Zimbabwe went to the polls to chose a new president Monday. It is the first time the African nation will hold an election without Mugabe's name on the ballot. 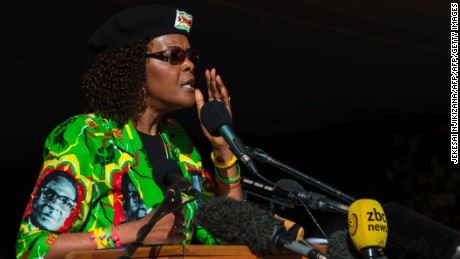 Democratic Alliance party member James Selfe told CNN Mugabe must be extradited from Zimbabwe to face charges in South Africa."A serious crime was committed last year in South Africa, and the perpetrator managed to get away without having to take responsibility for it. "We now hope the National Prosecuting Authority will institute action against Mrs. Mugabe, which in time will mean she will be extradited to face trial," he said.The country's leading prosecutor has declined to comment, but South Africa's International Relations and Cooperation in a statement said the department was studying the ruling.