When I was young, my father used to take us on weekend trips to Palestinian villages that had been ethnically cleansed.

Since we were not allowed to learn about our history in schools, where the curriculum is controlled by the Israeli education ministry, these trips were the most profound way to learn about my peoples history and to begin to form a political identity.

These are the memories that Israel fears and aims to conceal. Like pine trees planted to hide the remnants of destroyed Palestinian villages, the new nation-state law tries to hide the fact that Israel is sitting on stolen land. It is the thief's need to assert – to himself first and foremost – that what he steals is his own.

When it comes to the new law, the question is not about Israels intentions, which are clear. The question is what we should do as Palestinians who happen to hold Israeli citizenship, who take part in Israels "democracy" and who obey the state's laws, even when these laws and the state are against us.

What is our strategy? How do we fight back? Such issues have long been a subject of debate within the Palestinian community, but this debate has become more urgent in light of the new law.

Pragmatism and wisdom are not necessarily synonymous. It is time for a dramatic political change, before it is too late

One of the most common questions today is: What are we still doing in the Knesset? Some Palestinians have been calling on members of the Arab Joint List, a political alliance representing Palestinians in Israel, to resign from parliament.

Many prominent figures have criticised the insufficient response of Palestinian MKs, who tore up copies of the nation-state bill in protest after it was passed, and the lack of any clear strategy on how to deal with it beyond traditional speeches and a street protest.

Others have rightfully called for a reassessment of parliamentary election procedures, but to no avail. Members of the Joint List have been responding with cliches. They say we should be "pragmatic and wise", but they are not ready to undertake a serious and deep discussion.

A change must come

Pragmatism and wisdom are not necessarily synonymous. It is time for a dramatic political change, before it is too late.

To this end, we must acknowledge a few issues, including the failure of a dominant segment of Palestinians within Israel – along with their political representatives – to stay connected to the larger Palestinian struggle. They have accepted the Oslo paradigm, where their issues are "internal Israeli affairs" and their struggle is restricted to land occupied in 1948. The broader Palestinian struggle for freedom and an end to the occupation has become the struggle of "our brothers and sisters" and a matter of solidarity. This has inevitably led to perceptions that the struggle is for civil rights, rather than national liberation. This is why Arab MKs dont dare to break the rules and leave the Knesset.

In addition, political parties have prioritised the Knesset over the popular struggle. The institutionalised structures of these parties have become focused on electoral achievements and gaining voters. Even when they stage a protest, it is about electoral gains; questions of efficiency and the ability to achieve their purported goals are an afterthought.

There are also financial issues. To exist, these parties need funding, which comes from the state. Remaining in the Knesset is a matter of survival.

This is all part of a picture of political stagnation. These parties are dominated by old politics, with no space for revolutionary thinking. They have been playing by the rules for so long that there is no other way for them to operate. They have stagnated.

Like the Oslo Accords, Knesset participation has not brought Palestinians any closer to justice. It has made semantic changes, while the essentials remain the same, as was evidenced by the nation-state law. This is not because Palestinian MKs are incompetent, but rather because the structure has doomed them to fail.

It is time for Palestinian political representatives to reassess the situation they are in and engage in serious and meaningful discussions with their electorate.

They can view the nation-state law as a chance to stop participating in the farce of "democracy”. They can use this intolerable situation to stop legitimising Israel. Israel has never been a democracy, and the fig leaf we provide must drop.

MKs have a chance to establish a new phase, where Palestinians within Israel defy borders and reunite with the rest of their people in one struggle against apartheid and colonialism. Today, it is hard to deny that there is one apartheid state, from the river to the sea.

–Abir Kopty is a Palestinian writer and PhD student.

Why Trump’s Arab NATO idea is doomed to fail

Red Cross appeals for three staff missing in Syria since 2013 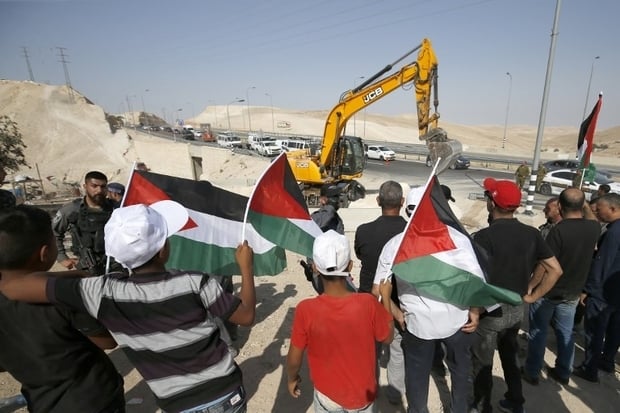 Khan al-Ahmar: We are not absent – we’re right here