Andy Chan, founder of the Hong Kong National Party addressed a packed house and tens of thousands on a live Facebook feed, equating Hong Kong's position under China to its former colonial past. "We were once colonized by the Brits, and now we are colonized by the Chinese, where is our right to determine our own future?" said Chan, who also warned that Hong Kong could follow the path of Tibet and Xinjiang, where China has recently been accused of imprisoning hundreds of thousands of Uyghur Muslims. The FCC said it received "representations" from the Chinese Ministry of Foreign Affairs (MOFA) in Hong Kong, though it did not elaborate on what was communicated. Hong Kong's Chief Executive Carrie Lam said she "regretted" the FCC's decision to host Chan, while her predecessor, CY Leung, repeatedly called for the event to be called off. In a statement Tuesday, MOFA called Chan's speech an "abuse of freedoms of press and speech," and accused the FCC of endorsing his views. 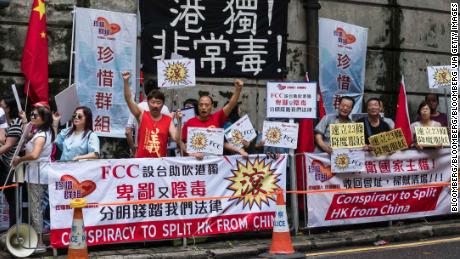 A perceived attempt by the government to censor Chan's talk made front page news in Hong Kong, and the event attracted a huge media presence, as well as protests by groups calling for it to be canceled, and for the implementation of an anti-sedition law. "By virtue of its historical, geographical and cultural difference, Hong Kong is a truly separate entity from the so-called Chinese nation," Chan said, describing China as an empire. Protesters outside the club waved the Chinese flag and displayed banners warning of a "conspiracy to split Hong Kong from China" and calling for the implementation of an anti-sedition law. At one point, a fire engine arrived and a large crew of emergency services staff rushed into the building to respond to what turned out to be a false alarm. Speaking to CNN before the talk, Chan said he was surprised by the amount of pressure which had been brought to bear on the FCC, an elite institution which has had a presence in Hong Kong since the 1940s and frequently hosts politicians and dignitaries."We are not armed, we have never advocated for violence, we have never acted violently," he said. 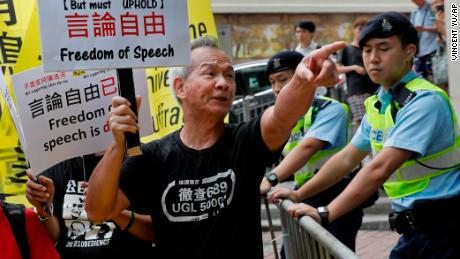 Chan has largely operated on the periphery of Hong Kong politics since becoming an activist during the 2014 pro-democracy Umbrella Movement. In 2016, he founded the Hong Kong National Party, which advocates for the city's independence from China and has a few dozen members. Both he and his party were thrust into the spotlight last month, however, when Hong Kong police announced they were seeking to use a colonial era ordinance to ban HKNP on national security grounds. Under the Societies Ordinance, if HKNP is banned it will be illegal to be a member of the party, act on its behalf, or raise funds for it. Offenders could face up to three years in prison and fines of up to $12,000. The ordinance has never before been used to ban a political party. Chan has been given until September 4 to rebut a 700-page police dossier which concludes that a ban on the party is necessary "in the interests of national security, public safety, public order and the protection of the rights and freedoms of others."In a letter to the Hong Kong government recommending a ban, Assistant Police Commissioner Rebecca Lam said the possibility HKNP would use violence to achieve its pro-independence goals "cannot be ruled out." An extensive log of Chan's activities and those of other party members — including traveling to a forum in Taiwan, setting up street booths, and posting on Facebook — shows the intense surveillance HKNP had been placed under. Pro-democracy figures in Hong Kong denounced the move to ban HKNP, with youth activist Joshua Wong equating it to the "white terror" pursued by Taiwan's authoritarian anti-communist regime in the twentieth century.In a statement, the UK Foreign Office expressed "concern" over the ban and said while it "does not support Hong Kong independence," the city's "high degree of autonomy, and its rights and freedoms, are central to its way of life, and it is important they are fully respected." 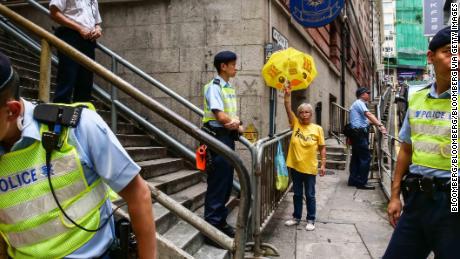 Shortly after the proposal to ban Chan's party was announced, the FCC invited him to give a talk titled "Hong Kong Nationalism: A Politically Incorrect Guide to Hong Kong under Chinese Rule." "Hosting such events does not mean that we either endorse or oppose the views of our speakers, who have included senior officials of the Chinese, Hong Kong and other governments as well as their opponents," the FCC's board said in a statement. "We believe that in free societies such as Hong Kong it is vitally important to allow people to speak and debate freely, even if one does not agree with their particular views." The move to host Chan — whose party has not yet been officially banned or deemed a threat to national security and continues to operate — attracted widespread condemnation from government and pro-Beijing figures.Victor Mallet, the club's acting president, said China's Foreign Ministry had "made representations to the club" about the event, though he did not reveal what was communicated to him. Hong Kong's Chief Executive Carrie Lam said the FCC's decision to host Chan was "regrettable and inappropriate," adding that she hoped "our friends in the FCC would … respect Hong Kong as an inalienable part of China." Her predecessor, CY Leung, has weighed in repeatedly on Facebook, calling for the government to reconsider leasing the FCC's swanky headquarters in the city's Central district, which it has occupied since 1982. "Would the Club invite speakers who promote racism, anti-semitism or Nazism? Ditto speakers who claim that the Holocaust and Nanjing massacre are figments of imagination?" Leung said Saturday. "I advise not."Pro-Beijing newspaper Ta Kung Pao said pro-independence talk was "hate speech," and compared Chan to anti-Tutsi media in Rwanda which helped fan the 1994 genocide.Press freedom groups have expressed concern over the pressure against the FCC, and about a move by public broadcaster RTHK to ban staff from covering the event live. "HKJA has earlier expressed worries about the criticism made by the Ministry of Foreign Affairs' office in Hong Kong and the Government against the FCC talk would result in media self censorship," the group said in a statement. "We are concerned that the RTHK ban might be an immediate case of its kind." Speaking at Tuesday's event, Mallet said hosting speakers like Chan "is what press clubs do, this is really a completely normal activity for a press club."

Support for Hong Kong independence and greater autonomy from China grew in the wake of the 2014 Umbrella Movement, after protesters failed to win any concrete reforms and government progress on political reform stalled.

The shift towards separatism has alarmed Beijing, with Chinese President Xi Jinping saying during a visit to the city last year that advocating independence was a "red line" for the central government. Chan was one of several pro-independence candidates barred from standing in legislative elections in 2016. Last year, that restriction was expanded to some candidates who support self-determination — the right for the city to choose its own future when current constitutional arrangements expire in 2047. Chan said he expected the same pattern to play out with regard to using the Societies Ordinance to ban political parties. The colonial-era ordinance has been widely criticized for being overly restrictive. In 1992 the last colonial government of Hong Kong amended it to bring it in line with international human rights law, but this move was reversed once China assumed control of the territory, one of several liberalizing reforms thrown out by the provisional legislative council, an appointed body stacked with pro-Beijing figures.Hanging over all talk of banning HKNP for the purposes of national security is Article 23 of the Basic Law, Hong Kong's de facto constitution. It calls on the local government to "enact laws on its own to prohibit any act of treason, secession, sedition, subversion against the Central People's Government." Attempts to bring Article 23 into force in 2003 sparked mass street protests, and the matter has been on the back burner for multiple administrations ever since. For Chan, this is a moot point. "Article 23 is already in effect right now," he told CNN. "They can ban any political party due to threats to national security, they can disqualify legislators." "In the past 20 years, Hong Kong has only progressed in one direction: backwards," he said.

Disclosure: Multiple employees of CNN in Hong Kong belong to either or both the Foreign Correspondents' Club and the Hong Kong Journalists Association.