Yarka, Israel – Israels small Druze community, long seen as “loyal” to the state, is on a collision course with the right-wing government of Benjamin Netanyahu over a new law guaranteeing superior citizenship rights for Jews, according to analysts.

Israel has traditionally cited the Druze, a secretive religious sect whose men serve in the Israeli army, as proof that non-Jews can prosper inside a self-declared Jewish state.

'Their illusions are being shattered. It looks like a process of awakening has begun that will leave both sides bruised'

However, recent days have seen an unprecedented outpouring of anger from large segments of the Druze community over a nation-state law passed last month by the Israeli parliament.

The new legislation has been widely criticised for making explicit the privileged status of the Jewish majority while omitting any reference to “democracy” or “equality”.

One Druze scholar, Rabah Halabi, said his communitys response had been like a mini-“intifada” – the word Palestinians used for two lengthy uprisings against the occupation.

“Much of the Druze community are in a state of shock,” he told Middle East Eye. “They thought that by proving their loyalty, they would be treated as equals. But now they are being forced to re-evaluate, to accept that this view was mistaken."

Halabi, who has written a book on Druze identity, added: “Their illusions are being shattered. It looks like a process of awakening has begun that will leave both sides bruised.”

The new law, which has a constitutional-like status, has angered the fifth of Israels population that are not Jewish, mostly descended from Palestinians who survived a campaign of ethnic cleansing in 1948. This Palestinian minority eventually received citizenship.

But unlike the Muslim and Christian communities, the 120,000-strong Druze sect in Israel has long been showcased as “loyal” and plays a key role in the army, especially in combat duties in the occupied territories.

Druze leaders have angrily pointed to the disproportionate sacrifices made by their community, including more than 420 Druze killed while in uniform.

The Druze also enjoy outsized influence in Israeli politics. Although comprising about 1.5 percent of Israels population, they have five legislators in the 120-member parliament, four of them in Netanyahus ruling coalition.

Unusually, the figurehead of the protests has been a retired and much-decorated Druze general, Amal Asad. 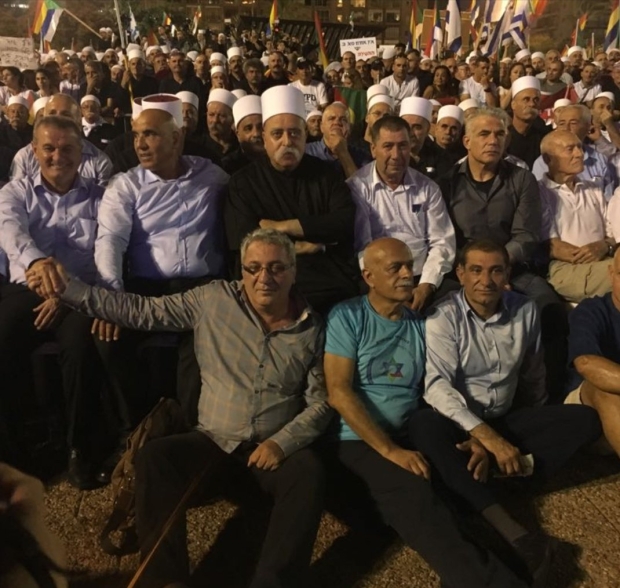 Asad, sitting in front with blue t-shirt, with other Druze leaders at the Tel Aviv protest on 4 August (Twitter/@tiviaev)

He led the speakers at a rally in Tel Aviv earlier this month, attended by some 60,000 Druze and Israeli Jewish sympathisers, including many former senior security officials.

The protesters demanded that the new Basic Law – one of a body that serves as Israel's equivalent of a constitution – be annulled or amended to confer equal rights on all citizens.

Crowds chanted “Equality! Equality!” and banners bore the slogan: “If we are brothers, we must be equals.”

Druze legislators and Palestinian leadership organisations in Israel have separately petitioned the Israeli supreme court to overturn the legislation. The court is not expected to hear the cases until early next year.

Adalah, a legal rights group for the Palestinian minority, has described the law as having “apartheid characteristics” and noted that there is “no [other] constitution in the world that does not include the right to equality for all its citizens and residents". 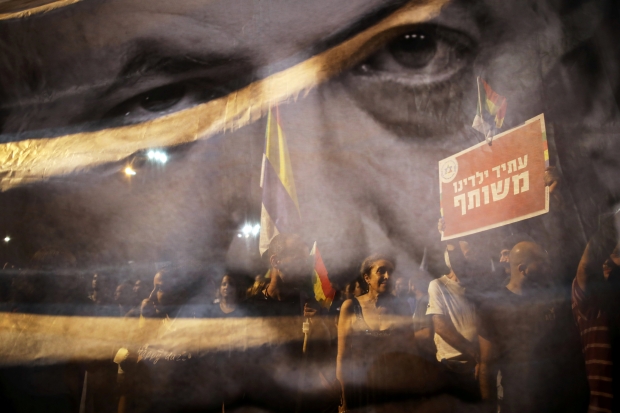 From behind an image of Netanyahu, Druze protesters at the Tel Aviv rally hold a sign in Hebrew reading 'The future of our children is shared' (Reuters)

The Druze protests appear to have blindsided Netanyahu and his cabinet, even though the law was under consideration for nearly a decade.

Nonetheless, he has stood his ground. According to analysts, the law is the centrepiece of his efforts to win elections, expected in the coming months, as he tries to face down intensifying corruption investigations.

In a sign of his hardline approach, Netanyahu walked out of a meeting held shortly before the rally when Druze leaders – including Asad, Tarif and several mayors – refused to accept a compromise that would have offered special benefits to the Druze while keeping the law unchanged.

'He hopes to dismiss the protests by saying: If the Druze cant agree among themselves, how is it possible for us to find a solution?'

Wahib Habish, mayor of the Druze town of Yarka in the Galilee, who attended the meeting, told the Israeli media afterwards: “We cant be bought off with benefits and rhetoric on closing gaps.”

“He has no intention of backing down,” he told MEE. “He hopes to dismiss the protests by saying: If the Druze cant agree among themselves, how is it possible for us to find a solution?"

The Druze are a secretive religious sect that broke away from Islam some 1,000 years ago. For protection, they chose to live in a mountainous region of the Middle East that is today split between Israel, Syria, Lebanon and Jordan.

Scholars have noted that, as a survival strategy, the Druze traditionally preferred to ally with whoever was in power.

Some Druze communities in the Galilee supported Zionist forces during the 1948 war that founded Israel on the ruins of the Palestinians homeland. A few years later, the Druze leadership in Israel signed a pact with the state, agreeing that the communitys men would be conscripted for three years into the army. 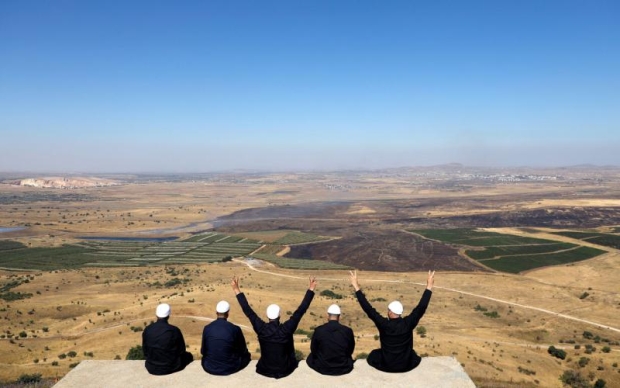 In return, Israel recognised the Druze as a “national” group, rather than as a religion, separating them from the rest of the Palestinian minority.

Complicating the picture, a much smaller Druze population fell under Israeli rule in 1967 when Israel occupied the Golan Heights, part of Syria. The 25,000 Druze in the Golan have mostly stayed loyal to Syria and refused Israeli citizenship. They are not drafted.

Jamal said sections of Israeli Druze society were increasingly wondering whether they had paid a “double price” for their agreement to conscription.

“Not only were the Druze discriminated against like other Arab citizens, but they sacrificed their lives on the battlefield too,” he noted. “Look at it this way, the Druze are not just second-class citizens, they are second-class Arabs.”

As part of the agreement, Israel introduced a separate school system for the Druze in the 1970s, which has encouraged them to view their military service as a “covenant of blood” with the Jewish people.

Dalia Halabi, herself Druze and the executive director of Dirasat, a policy research centre in Nazareth, said the Druze education system was among the worst in Israel for matriculation rates. Instead, Israel had used the schools to “brainwash” Druze children.

“The Druze are taught to fear other Arabs, not only their neighbours in the Galilee but in the wider region,” she said. “They are encouraged to believe that they would be vulnerable and alone without the protection of the Israeli army.”

Israel has long trumpeted the Druzes military service as proof that it is possible for non-Jewish minorities to integrate.

Druze analysts consulted by MEE, however, noted that for many years there had been an intensifying split within the Druze community on the issue of military service that the new Basic law had brought to a head.

A refusal movement among young Druze men has become more prominent over the past decade, as have complaints that successive Israeli governments failed to make good on promises to give the Druze equal rights. 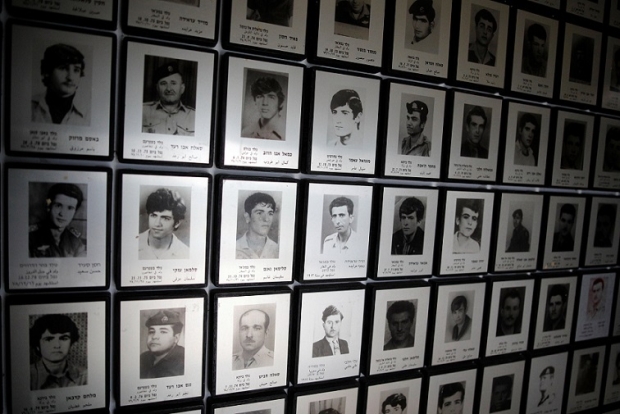 Rabah Halabi, who teaches at Hebrew University in Jerusalem, pointed out that the loss of their farmland left many Druze men dependent on Israels extensive security economy.

More than a quarter are recruited after army service as security guards, prison wardens or border policemen, the latter a paramilitary force operating inside Israel and the occupied Palestinian territories, he said.

“For a substantial section of Druze youth, army service is the only way to ensure a career. It is primarily an economic issue for them.”

The new Basic Law has inflamed these existing tensions by enshrining privileges for Jewish citizens in a range of key areas, including immigration rights, access to land, and in housing and budgets. It also downgrades Arabic, stripping it of its status as an official language.

In an unprecedented move for a Druze leader, Asad, the general leading the protests, warned on social media that the Basic Law risked laying the foundations for “apartheid”. He called the measure “evil and racist”.

The groundswell of anger was apparent too at a recent awards ceremony attended by Avi Dichter, a former head of Israels Shin Bet domestic intelligence service and one of the architects of the law. He needed protection as Druze protesters publicly confronted him, denouncing him as a “traitor” and “Nazi”.

Several Druze army officers have resigned and others have threatened to stop serving, sparking fears of mass insubordination. 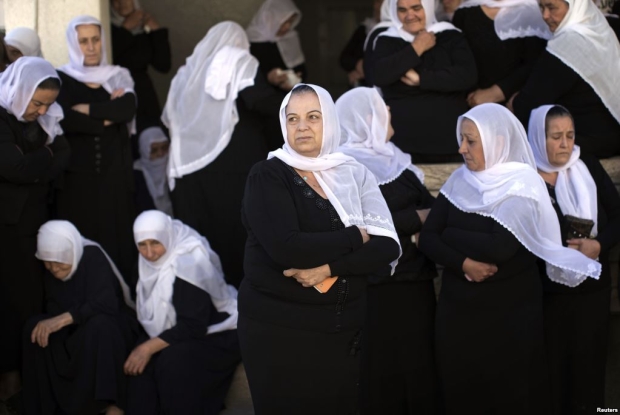 Druze leaders have so far refused to cooperate with a special ministerial committee set up by Netanyahu to advance a solution for the Druze, as well as a tiny Circassian community and sections of the Bedouin that also serve.

It seems likely to propose extra benefits on an individual basis for Palestinian citizens who serve in the army.

Jamal, of Tel Aviv University, said: “There are many Druze who have invested in this so-called historical bond and do not want to lose their special status.

“But at the same time they cant accept the deal Netanyahu is offering of perks for army service. They dont want to look like they have been bought off with money, to seem like mercenaries.”

Unless one side backs down, the Druze community now looks set for a major clash with the government for the first time in the countrys history.

A recent poll indicated that 58 percent of Israeli Jews support the law, though a similar number expressed sympathy for Druze concerns.

Ayelet Shaked, the justice minister, has already warned of “an earthquake” on the political right if the courts dare to annul the law.

Meanwhile, Netanyahu has appeared in no mood for compromise. After his meeting with Druze leaders broke up in acrimony, his officials implied that General Asad and his supporters were disloyal.

Channel 2 TV quoted a source close to Netanyahu stating, apparently in reference to Asad and his followers: “Whoever doesnt like it [the Basic Law], theres a large Druze community in Syria, and theyre invited to found the state of Druzistan there.”

Dalia Halabi observed: “Netanyahu is fanning the flames because he assumes the Druze will agree to whatever he says. He thinks we now have no option but to be loyal.”

But Mano Abu Salha, aged 58 from Yarka, and among those who attended the mass demonstration in Tel Aviv, told MEE that Netanyahu would be proved wrong.

He said: “We didnt come from Syria. We are living on our historic lands and were not going anywhere. We are the native population. Netanyahu better realise that we are staying put and will fight for our rights.”

Fascist tactics: How Jeremy Corbyn’s detractors are plotting to remove him

In first, Democrats nominate transgender woman for governor in US

Cinemas will reopen in Saudi Arabia as part of Vision 2030