A rebel fighter stands inside a school-turned-prison in Syria's Foua. (MEE/Harun al-Aswad)

FOUA, Syria – Before the Syrian war, the fields around the northern town of Foua were renowned for their fig and olive trees.

Abandoned, they are now parched, and anything that once grew there has withered and yellowed under the summer sun.

The land is scarred. Huge earthen fortifications made from Fouas reddish soil surround the town and the road into it is lined with trenches.

Three years of siege have radically changed this place and emptied it of inhabitants.

To enter the former Syrian government stronghold, three rebel-manned checkpoints must be navigated.

Once the visitor is inside, the barren fields and grim fortifications disappear behind simple houses, quaint side streets and an open, bare square. The siege of Foua and Kefraya, its neighbour to the west, began in March 2015, when rebel forces captured Idlib city, the provincial capital.

The towns are predominantly Shia enclaves in a majority Sunni part of Syria. Their residents endured three years of rebel besiegement and lived under the control and protection of Syrian government forces and Iran-backed militias such as Lebanon's Hezbollah.

When the armed factions were busy with processing the buses, dozens of civilians entered the two towns, causing chaos and limited thefts

For many Shia fighting under Syrian President Bashar al-Assad's banner, the towns became a cause of the utmost importance. For the rebels who surrounded them, Foua and Kefraya were a target that could be pounded as punishment for Syrian government assaults on rebel positions elsewhere.

Last month, this tense dynamic, which had surrounded the towns and had an outsized influence on the Syrian war, came to an end when an agreement was reached to evacuate the 7,000 people left there in return for hundreds of prisoners being released from Assad's prisons.

Abu al-Mutasim, a commander in the Jaish al-Ahrar rebel group, recalls the moment the towns fell to rebel forces and the residents were being bussed out as being a chaotic time.

"When the armed factions were busy with processing the buses, dozens of civilians entered the two towns, causing chaos and limited thefts," he told Middle East Eye.

"Then a commission of factions emerged and conducted an inventory of the entire contents of the two towns."

The pro-Assad fighters and the towns' residents have left many mementos of their presence, such as Shia slogans and expressions of support for Assad scrawled on walls, which rebels have begun to try and scrub off.

More dangerous remnants have been left for the rebels now settling into towns on which they previously trained their gun sights.

Instead of cultivated crops, hundreds of mines have been sown into the surrounding fields. In many homes, electrical appliances have been booby-trapped with explosives. Signs at their doorways warn of the danger. Rebels on a street in Syria's Foua. (MEE/Harun al-Aswad)

In a reflection of Syria's splintered opposition, Foua and Kefraya have been divided into 11 segments, with the number each rebel group is responsible for clearing mines from depending on the faction's size.

Heavy weapons left by pro-government fighters in Kefraya and Foua are few: two T72 tanks, one 2S1 Gvozdika howitzer and some 23mm and 14.5mm automatic weapons.

In comparison, a huge amount of ammunition and light and medium weapons were abandoned by the departing defenders.

Sami Basti School lies in Foua's centre. Its days of hosting children are long past, however, and in recent years it has instead been used as a prison. The corridors are clogged with barricades and their walls are covered in sectarian phrases, such as "Hezbollah will remain, we alone, oh Hussein". A rebel fighter reads graffiti in a classroom that once served as a prison cell in Syria's Foua. (MEE/Harun al-Aswad)

There are no desks or chairs in the classrooms, only large, heavy iron doors and some traces of blood on the ground.

Equipment commonly used in a torture method known as "the ghost" can also be seen, where prisoners may have been suspended by their hands or feet for hours, or even days.

The school's entrance is a charred mess – evidence, a rebel named Abu Talib says, of mines laid by pro-government forces as a trap when they were evacuated. 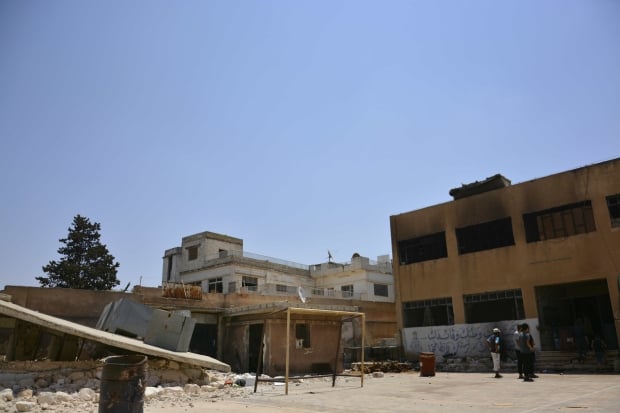 The burnt out entrance of a school and playground in Syria's Foua. (MEE/Harun al-Aswad)

Prisoners have scrawled their thoughts and pains onto the walls of the classrooms-turned-cells.

"We are oppressed, and those who oppress us claim to be the oppressed. Days have passed soul wrenchingly," says one.

Abu Talib says that the bloodshed is a sign of severe torture. Copies of the Quran are also found in the cells, with their pages torn for reasons unknown. Under the evacuation agreement, four prisoners were released from the school. The fate of the rest is unclear.

Poking her head round the door of a home, a little girl is one of many Syrians from other parts of the country who have fled pro-government forces and are now settled in Foua's empty homes. 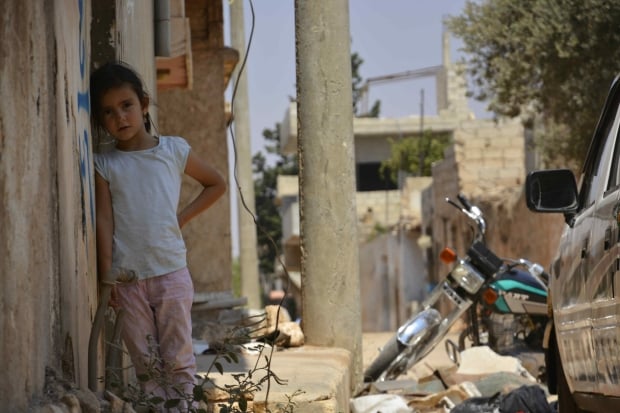 Her father, Hassan Gomaa, was displaced with his family from the northern Hama countryside six years ago.

"I have no other place to live with my children. I used to move from one place to another," he tells MEE.

"Jaish al-Ahrar gave me a house here after I pledged in writing to preserve and not harm it. I only want stability."

"Many of the houses here were burned by the people of the area before they left," Gomaa says.

Jaish al-Ahrar gave me a house here after I pledged in writing to preserve and not harm it. I only want stability

According to Abu al-Mutasim, priority is given to the most vulnerable families. In Jaish al-Ahrar's section alone, some 200 families have been settled.

Ibrahim Abdul Qadir, another civilian who has taken a Foua home as his own, says he h'as lived in displacement for four years after fleeing Souran, in the northern countryside of Hama.

"My brother works with the Jaish al-Ahrar and helped me secure the house here," he tells MEE. "My father has been missing for six years and my family is made up of eight people. Renting houses, if they are available, is very expensive in Idlib."

Though Jaish al-Ahrar may have insisted on pledges to preserve Foua's property and character, others have a different idea.

On the edge of the roundabout at the main junction at the entrance to the town, a muezzin calls people to the 'Asr afternoon prayer. A muezzin calls people to prayer in a square in Syria's Foua. (MEE/Harun al-Aswad)

"Most of the mosques here need to be renovated," says Hassan Juma, who has recently moved to the town.

Like the rest of the displaced people settled in Foua and the rebels who control it, Juma is Sunni.

"The Shia mosques and husayniyah [Shia congregation halls] have a lot of sectarian phrases, black flags and pottery used in their prayers. We cannot pray in them."

Calm before the storm

For those in the surrounding areas, there has been some return to normalcy.

Lying between Idlib city and the Turkish border, Foua and Kefraya are highly strategic. Now the sieges are over, the roads linking the provincial capital with a number of towns and villages in the north have been reopened.

Previously, Idlib's residents were forced to travel on the backroads past the two towns, doubling the time and distance to their destinations.

On the main roads lay the front-lines, though some Syrians newly displaced from elsewhere were unaware of this and fell into the hands of pro-government forces.

One of those feeling the effects of the newly relaxed situation is Firas al-Ahmadi, who owns a small shop in the town of Binnish, adjacent to Foua.

"We no longer need to transit from the long and rugged feeder roads," he says with relief.

Not only were the roads, fields and towns around Foua in range of the Assad forces' guns; the government's air force bombarded the surrounding areas whenever rebels staged an assault.

"Many of the shells landed in Binnish and resulted in various casualties and losses, especially in agricultural crops," Ahmadi says. "Farmers have still not returned to their land, for fear of mines." A shepherd takes his flock through a square in Syria's Foua. (MEE/Harun al-Aswad)

However, despite the respite, a new, potentially more serious threat looms.

Last week warplanes and helicopters dropped leaflets over Foua, Kefraya and much of Idlib province, calling on the opposition to lay down its arms and enter into reconciliation agreements with the government.

With the two Shia towns now empty of their residents, little stands in the way of a full-blown assault on Syria's last rebel-held province.