The strike is evidence of the NATO allies' continuing close military collaboration, which spans from Iraq to Syria, despite a row played out in tariffs and tweets that threatens the foundations of the Turkish economy.

'The Pentagon is the one that usually cares about Turkey's concerns, and we will keep our cooperation with them on the ground'

Ismail Ozden was killed on 15 August after the Turkish air force conducted two bombing operations against the Sinjar Resistance Units (YBS), an offshoot of the Kurdistan Workers' Party (PKK), which both Turkey and the US have designated as a terrorist group.

After the Americans shared information with Turkey, bombs were dropped on Ozden's car in Iraq's northern Sinjar area, near the border with Syria.

"We support Turkey's counter-PKK efforts in a variety of ways. We recognise the very real threat that the PKK poses to Turkey's security," Eric Pahon, a Pentagon spokesperson, told MEE late on Monday.

From Manbij in Syria to Sinjar in Iraq, to a new Turkish-Iraqi border crossing in the works, four Turkish diplomats told MEE that military cooperation between the two countries is progressing regardless of the public sparring over imprisoned American pastor Andrew Brunson.

“The Pentagon is the one that usually cares about Turkey's concerns, and we will keep our cooperation with them on the ground," said one of the diplomats.

The Pentagon on Monday also stressed that, despite the tensions, the relationship between Washington and the Turkish military remains strong.

"There has been no interruption in our relationship with Turkey at all," Colonel Rob Manning told reporters.

One project that will move forward according to both Turkish and American sources is joint patrols of the northern Syrian town of Manbij, which lies 25km south of the Syria-Turkey border.

Manbij has been a source of tension between two countries since 2016, when the Syrian Democratic Forces, led by the Kurdish People's Protection Units (YPG), took control of the city with the support of the US army.

'Even if its going slow, Manbij is an example of how we can work a deal together'

Turkey views the YPG as a terrorist group and an extension of the PKK, which has waged a three-decade insurgency on Turkish soil. Washington sees the YPG as a key ally in the fight against the Islamic State (IS) group.

During Turkish Foreign Minister Mevlut Cavusoglu's visit to Washington in early June, the two countries reached an agreement: the YPG would withdraw from Manbij, and US and Turkish forces would hold simultaneous and then joint patrols to maintain security and stability in the town.

Last Thursday, US Secretary of Defence Jim Mattis said: “The gear is in. The officers are in and it will start shortly."

David Satterfield, the State Departments acting Middle East chief and possibly the next US ambassador to Ankara, said on Friday that the row between Turkey and the US had not affected the Manbij agreement.

"The proceeding upon the Manbij roadmap by all parties involved has been smooth and extremely encouraging. There has been no consequence or impact that we can discern of the other bilateral issues in play here," he said. 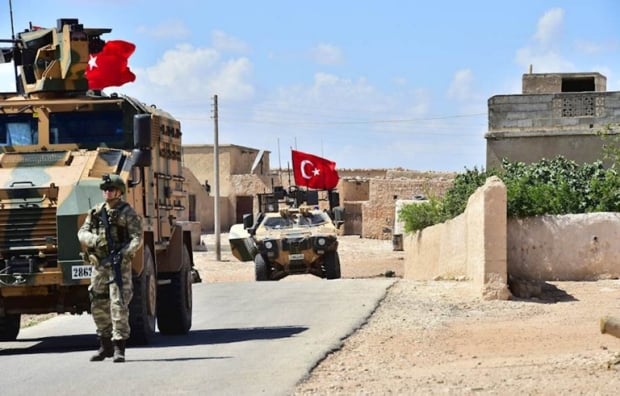 One of the Turkish diplomats MEE spoke to echoed Mattis and Satterfield: the deal may have been moving slowly, but even if its taking more time than expected, joint patrols will start soon, he said.

During a visit to Washington earlier this month, the Turkish delegation used Manbij as an example of cooperation in an attempt to try to solve the diplomatic crisis over Brunson, said the diplomat, who works closely with his US counterparts to resolve the disagreement.

“Even if its going slow, Manbij is an example of how we can work a deal together," he said. "Thats why we brought it to table when we were in Washington and asked them why they wouldnt accept another deal to work together on Brunson.”

The visit to Washington ended without any solutions, with the US rebuffing two Turkish deals in exchange for Brunson's release. Regardless, joint Manbij patrols are expected in the coming days.

Manbij is not the only area over which the Turkish army and the Pentagon cooperate. There are also the Qandil Mountains and Sinjar in northern Iraq.

Following America's assistance with the Sinjar operation last week, Turkey now expects the US to share more intelligence about the Qandil Mountains in northeast Iraq, where the PKK has been based since the 90s.

During a February meeting between Mattis and his Turkish counterpart, Nurettin Canikli, in Brussels, the US promised to share intelligence with Turkey to support its fight against the PKK in Iraq.

But all four of the Turkish diplomats which MEE spoke to stressed that Ankara is aware of the limits of the Pentagons cooperation.

In Manbij, the YPG has not yet withdrawn despite the June agreement, and the militia still controls nearly a quarter of Syria with US support. 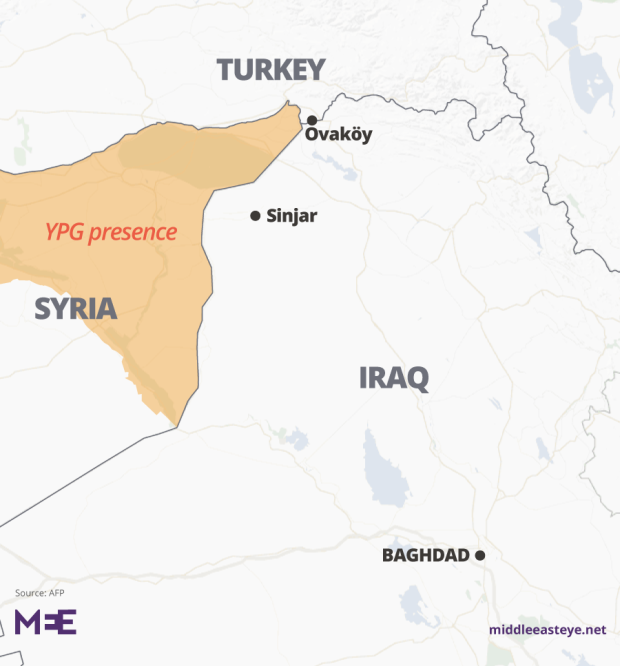 In Sinjar, American support for Turkey's fight against the YBS will be limited, since the US uses the area itself to transport weapons, ammunition and other equipment to the YPG in Syria.

The diplomats said the Pentagon has cooperated with Turkey on its hunt for some high-level PKK leaders, but has been reticent to do more.

The US has significant influence over the YBS and, if the group was cleared from the area by Turkish operations, the Americans wouldn't have armed groups to protect their convoys, which carry equipment into Syria.

Iranian-backed Hashd al-Shaabi militias also operate around Sinjar, and the US would prefer the YBS maintain control of the area, rather than any group supported by Iran.

Turkey ready to release pastor but US offering nothing

One of the diplomats, whose area of expertise is Iraq, told reporters last week that Turkey is working on a bigger plan to clear the YBS from Sinjar.

“We know there are mostly Yazidis in the YBS and, after IS left the area, these Yazidis think they desperately need this YBS group to protect them," he said.

"We are trying to find the differences between the Yazidis and the YBS and will work on them to end the Yazidis need for the group."

The real reason behind Turkeys efforts to clear the area of the YBS is the plan for a new border crossing in Ovakoy, a village on the border of Iraq, Syria and Turkey.

The only current crossing, located in Habur to the east of Ovakoy, is controlled by the Kurdistan Regional Government, and there are no crossings between Turkey and Iraq controlled by the government in Baghdad.

'If we succeed, Iraq wont depend on Iran to export its oil, and thats why the US supports the project'

But the new crossing will directly link Turkey to Iraq and will include a highway that runs from Baghdad to the border, bypassing Iraq's autonomous Kurdish region.

Turkey and Iraq are currently discussing the opening of the crossing. Turkey is ready to take responsibility for the construction work in Iraq, including building parts of the highway and repairing existing sections damaged by IS, one of the diplomats said.

“There are many armed groups to the south of our planned border gate. This creates an environment of anarchy, and thats the perfect place for terrorists to have freedom to move," the diplomat said.

"The US uses this freedom to cross the border and help the YPG in Syria, but we need to clear the terror groups to secure the road from Baghdad to the new border gate."

Turkey has not started to hold talks with the US about the new crossing, but the government knows that Washington is not against the project in principle because it will likely increase trade between Turkey and Iraq – and decrease Iraqi dependency on Iran.

Iraq currently has 10 border crossings with Iran and most foreign trade conducted over land is done with its neighbour to the east. 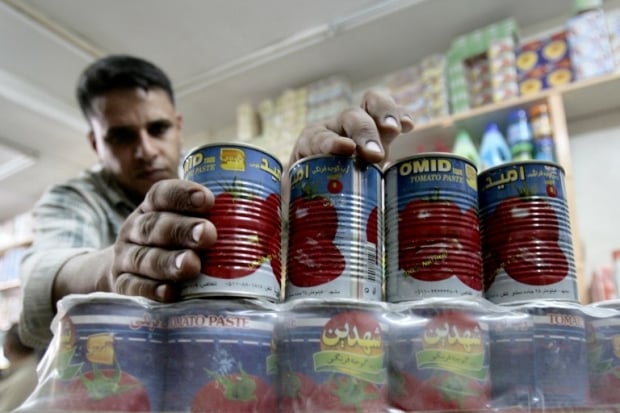 One of the diplomats said Turkey is aware that Iran is not happy about the new project because it is afraid of losing influence in Iraq.

“Iran and Iraq have more than 10 border crossings but we have only one, and its not even controlled by the central government in Baghdad," he said.

"We want to increase our volume of trade with Iraq. That will also lead to transportation of Kirkuk oil to Turkeys Ceyhan port.

"If we succeed, Iraq wont depend on Iran to export its oil, and thats why the US supports the project.”

However, promises of support from the US for the crossing won't be enough for Turkey. Ankara, the diplomat said, will be looking for the US to cut off its support for the YBS.