Back in 1986, famed Uruguayan writer Eduardo Galeano penned an essay on Nicaragua, in which he highlighted some ironies he had detected concerning the matter of “terrorism”.

Specifically, Galeano wrote, a certain prominent nation then claiming that “even the stars must be militarised … to confront the terrorist threat” happened to be the very same one that was simultaneously engaged in “terrorist acts against Nicaragua, practising terrorism as an imperial right and … exporting state terrorism, on an industrial scale, under the registered trademark of the National Security Doctrine”.

The nation in question was, of course, the United States, which had committed itself to punishing Nicaragua for that countrys decision to veer from the straight and narrow path of obsequiousness to the needs of US capital. Punitive methods included unleashing havoc-wreaking right-wing proxy forces and mining Nicaraguan harbours.

Without doubt, its worth keeping such ironies in mind as we mark this years International Day of Remembrance of and Tribute to the Victims of Terrorism on 21 August – not that plenty more irony hasnt accumulated over the past three-plus decades.

A United Nations General Assembly resolution explains that the commemorative day is meant to “honour and support the victims and survivors of terrorism and to promote and protect the full enjoyment of their human rights and fundamental freedoms”. The resolution also reasserts the assemblys conviction that “any acts of terrorism are criminal and unjustifiable, regardless of their motivation, wherever, whenever and by whomsoever committed”.

The post-9/11 'war on terror' alibi has proven immensely handy in exonerating the US for terroristic behaviour from Iraq and Afghanistan to Pakistan, Somalia and beyond

Typically vacuous UN language aside, its curious that the international body has chosen a terror-oriented day of remembrance, given that the UN has not managed to define terrorism in the first place. As the UN website specifies, “an unequivocal definition of terrorism would remove the political distinction that some make between the actions of so-called freedom fighters and terrorists”.

As it so happens, Nicaragua is merely the utmost tip of the iceberg. Thanks to the current Western monopoly on the terrorism discourse – according to which the US, Europe and Israel are inherently victims rather than perpetrators of terror, no matter the reality on the ground or relevant sequences of events – there are a whole lot of “victims and survivors of terrorism” who go perennially unrecognised.

Indeed, in various lexicons, words like “Arab”, “Muslim” and “Palestinian” are regarded as de facto synonyms for “terrorist”, despite the frequent presence of these very categories of human on the receiving end of terror. The day of remembrance for victims of terrorism is thus perhaps as good an occasion as any to remember the unremembered.

The Encyclopedia Britannica defines terrorism as “the systematic use of violence to create a general climate of fear in a population and thereby to bring about a particular political objective”. And for systematic violence in a nutshell, one need look no further than the state of Israel, which since its spontaneous establishment on Palestinian land in 1948 has dedicated itself to sustaining a perpetual climate of fear as it endeavours to erase Palestinian identity and other obstacles to the usurpation of territory. Theres no dearth, it seems, of violent options from which to choose. From straight-up massacres, to not-so-surgical bombings, to flesh-incinerating white phosphorus attacks, to air strikes on children, to sniper killings of peaceful protesters and medics, the Israeli military has got something for everyone.

Meanwhile, lest the climate of fear subside for even a moment, buzzing drones are ever on hand to ensure the Palestinian population remains good and terrorised. But in the end, of course, its the Palestinians who are the terrorists.

Nor can you get much more systematically violent than the US, a nation founded on genocide and slavery. More contemporary US performances have included annihilating portions of civilian populations from Vietnam to Panama to Iraq.

To be sure, the post-9/11 “war on terror” alibi has proven immensely handy in exonerating the US for terroristic behaviour from Iraq and Afghanistan to Pakistan, Somalia and beyond.

Needless to say, were a foreign country to inaugurate a habit of bombing US wedding parties, the phenomenon would be immediately decried as the T-word – and the fallout would require a far more intense cleanup than the signature US “oops-sorry” approach.

In Yemen, too, a climate of fear prevails, thanks in no small part to the US-backed Saudi-led coalitions ever-dogged pursuit of “terrorists”. In November 2017, The New Yorker magazine noted that “Saudi armed forces, backed by more than forty billion dollars in American arms shipments authorized by the Trump and Obama administrations, have killed thousands of civilians in air strikes” in Yemen.

Rewind for a second back to 1986, when Galeano alluded to the relationship between the US “demonisation” of Nicaragua and the sustainability of the US defence industry. Some things, as they say, never change – like the systematic use of violence.

Now, in the aftermath of this months Saudi-led strike that massacred dozens of children on a school bus in Yemen, theres all the more reason to observe the International Day of Remembrance of and Tribute to the Victims of Terrorism – and, while were at it, to call out the real terrorists.

Photo: Pakistanis burn an American flag to protest a US drone strike against a Taliban leader in Peshawar on 27 May 2016 (AFP) 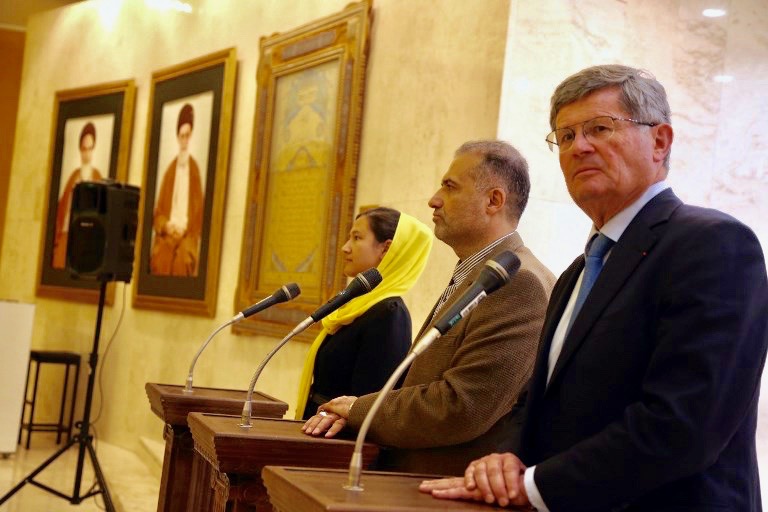