ZAGREB — When Serbia and Kosovo floated the possibility of a land swap as part of a historic peace deal, the proposal was not a new one. What was different this time around was the reaction from Europe and the U.S.

Where critics once would have denounced any modifications of borders in the Balkans as a threat to regional stability, this time the response was measured. German Chancellor Angela Merkel was a voice of caution, but a large part of the international community simply shrugged their shoulders and accepted the proposal as legitimate.

Whether or not a deal ever materializes, the reaction to the proposal — put forward by Serbian President Aleksandar Vučić and Kosovo President Hashim Thaçi — shows how much European and transatlantic politics have changed.

The idea of a “Europe whole and free” — the Continents organizing principle since the fall of the Berlin Wall — is fracturing. In its place is a return to spheres of influence, an approach to geopolitics mainly advanced by illiberal democracies like Russia and Turkey.

For almost three decades, Europe pursued a path of integration and democratization. “Europe whole and free,” an idea championed by both U.S. and European leaders, described a Continent in which communist dictatorships evolved into liberal democracies and socialist economies opened into free markets.

The promises implicit in the policy jumpstarted a process of national emancipation, from the Baltic to the Adriatic. The new sovereign countries sought to become NATO allies and EU members.

The EUs enlargement policy also became an essential stabilization tool for southeastern Europe after the wars launched by Slobodan Milošević. During the Cold War, Yugoslavia was not aligned with the Western bloc or the Eastern bloc. It was only after the fall of communism that the Balkans were offered a place in the “whole and free” Europe.

Lately, however, the post-Cold war promise is looking stale. Its ideological competitor? Self-confident illiberal democracies aspiring to establish spheres of influence along the lines of their former empires.

The return of spheres of influence does not mean that the Soviet Union or the Ottoman Empire are being rekindled from their ashes. But it does mean that Moscow and Ankara are exerting their authority with renewed fervor.

Only a Europe that is truly whole and free can project stability — in the Balkans and beyond.

In his 2011 election victory speech, then Turkish Prime Minister Recep Tayyip Erdoğan claimed, “Sarajevo won today as much as Istanbul.” In doing so, he was claiming Bosnia and Herzegovina — along with Damascus, Beirut and the Palestinian territories — as parts of his sphere of influence.

This year, when Erdoğan, now president, was banned from campaigning in other European countries, he used Sarajevo as his European base for an electoral rally convening Turkish diaspora from all over the Continent.

Russian President Vladimir Putin, too, demonstrated — first in Georgia and later in Ukraine — that Moscow will no longer be a bystander if newly independent states move closer to European and Euro-Atlantic structures. Despite the sanctions and condemnations, Putin became an unavoidable geopolitical actor, with a very clear of sphere of influence.

In backing border change in the Balkans, the Serbian president has made it clear that hes understood the new reality. Belgrade, he appears to have decided, should also foster its sphere of influence.

In a speech in Mitrovica last month, Vučić described Milošević as a great but unaccomplished Serbian leader and — like Erdoğan did in 2011 — he listed cities that were once part of his polity.

In imitating the leaders of illiberal democracies Vučić is not seeking to restore Yugoslavia, but rather to restore Belgrade to a capital with enough authority to dominate the so-called “Yugosphere.”

However, instead of confronting Europe and the U.S., Vučić will seek EU membership and open a dialogue with NATO, counting on the fact that for many European leaders, it is easier to tolerate his Balkan version of illiberal democracy than to let Russia and Turkey stake more claims in the Balkans.

At the same time, Vučić will try to maintain Belgrades neutrality and foster close political, economic and military cooperation with Russia. He will also deepen ties with China and seek an accommodation of interests with Turkey in the Balkans, especially Bosnia and Herzegovina. Vučić will also suggest a Balkan Customs Union and insist on the expanded authority of Belgrades Special War Crime Tribunal to prosecute crimes in all of former Yugoslavia. 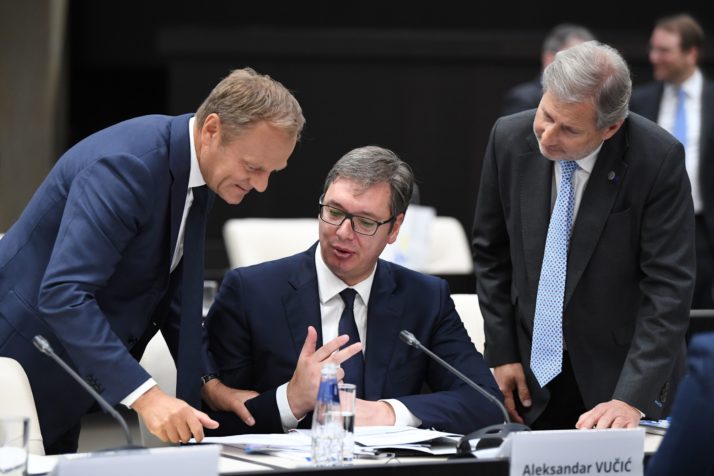 In domestic affairs, Vučić will concentrate power and curtail individual liberties and freedom of the media. He is also likely to intervene more frequently in the domestic affairs of neighboring countries.

Europes biggest problem in the region is not Vučić, who will most likely fall short of his ambition to create a new sphere of influence between East and West.

But his proposals for border changes with Kosovo reflect a broader change in Europe: The ideal of a “whole and free” Europe is being replaced by the reality of a Continent that is becoming more fragmented and less free.

The EUs enlargement policy has lost its strength. Just as Western democracies are not eager to welcome more countries into the EU, candidate countries are not always firmly committed to transforming their societies and power structures.

The policy still formally exists, but it is more of a leftover bureaucratic procedure than a real strategic policy for stabilization and reform. That needs to change if the EU is to prevent further fragmentation and the erosion of its democratic values.

Only a Europe that is truly whole and free can project stability — in the Balkans and beyond.

Davor Stier is a former foreign minister of Croatia and a member of the Croatian parliament.