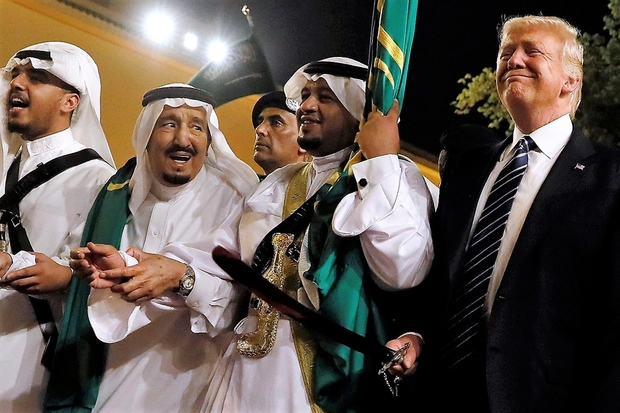 Donald Trump's latest comments on the murder of Jamal Khashoggi have been described as dishonest, shocking, juvenile and clumsy by a string of US lawmakers, journalists and other commentators.

Now, a University of Ottawa professor has also raised alarm over a string of lies he says the US president peddled in his statement on Tuesday.

Amid a slew of exclamation points and extraordinary comments on a wide range of topics, Trump pledged to continue to stand by Saudi leaders, including the country's de facto ruler, Crown Prince Mohammed bin Salman, despite the journalist's murder.

Thomas Juneau, an assistant professor at the Canadian university's Graduate School of Public and International Affairs who specialises in Middle East politics, said on Twitter that Trump's statement amounts to "a pile of lies, BS and nonsense".

Here are a few of the president's comments that Juneau debunked:

Trump: 'Iran is responsible for a bloody proxy war in Yemen'

Trump made this allegation in only the second sentence of his statement on Tuesday.

"By no objective measure is that true," said Juneau, who explained that the war in Yemen was being fought by local actors before Saudi Arabia intervened.

A Saudi-led coalition, which includes the United Arab Emirates and received military and logistical support from the United States, among other Western countries, began a bombing campaign in Yemen in 2015 after the country's Houthi rebels took over the capital, Sanaa.

It was only after Saudi Arabia's intervention in the conflict that Iran increased "its low support to the Houthis", Juneau said.

The ongoing war has pushed Yemen to near collapse, as millions of citizens are at risk of famine, and diseases and malnutrition are widespread.

Trump: 'Assad has killed millions of his own citizens'

Trump made this allegation as he argued that Iran is responsible for propping up the government of Syrian President Bashar al-Assad.

It's "inaccurate", said Juneau. "Assad is responsible for far more deaths in Syria than any other actor but hundreds of thousands, not millions."

Trump: 'Saudi Arabia would gladly withdraw from Yemen if the Iranians would agree to leave'

"Nonsense," said Juneau. "Saudi will not withdraw from Yemen, gladly or otherwise."

Indeed, despite heightened international pressure to end the conflict in Yemen, including a push by the United Nations to get the warring sides to agree to a long-term ceasefire, the fighting in Yemen is ongoing.

On Monday, clashes resumed after a brief lull in the Yemeni port city of Hodeidah, which the Saudi-led coalition is hoping to recapture from Houthi control.

Juneau said that even if Saudi Arabia was willing to withdraw from Yemen in exchange for Iran doing the same, the "trade would be very strange".

Riyadh has large investments in the country, he said, while Tehran does not.

3. "Saudi Arabia would gladly withdraw from Yemen if the Iranians would agree to do the same": nonsense. Saudi will not withdraw from Yemen, gladly or otherwise. And if it were ready to, this trade would be very strange, since Saudi has a massive investment in Yemen, unlike Iran.

Trump: Saudi Arabia 'agreed to spend and invest $450bn' in the US

"Trump drinks that kool-aid," Juneau wrote on Twitter, saying there is no evidence the US president's claim is true.

Trump: '$110bn will be spent on the purchase of military equipment' from US companies

This claim has also been debunked, said Juneau.

Some of the agreements to sell US-made weapons to Saudi Arabia were agreed to under the Barack Obama administration, but "most have not materialised yet", Juneau said.

The real dollar amount that will be spent "is far lower", he said, without going into specifics.

Trump: 'If we foolishly cancel these contracts, Russia and China would be the enormous beneficiaries'

Juneau said this is also untrue.

Saudi Arabia has grown so dependent on the US and other Western countries for its military systems, including training and spare parts, that it "would take decades" to shift toward Russia or China, he said.

"Trump simply does not understand that this gives the US tremendous leverage, not the other way around."

Trump: 'King Salman and Crown Prince Mohammad bin Salman vigorously deny any knowledge of the planning or execution of the murder'

Recent political developments in Saudi Arabia over the past three years "very, very strongly point towards MBS's direct responsibility" for the murder of the Saudi journalist, he said.

Juneau is not the only person to come to that conclusion.

The CIA said on Friday it believes the Saudi crown prince ordered the killing, while Turkish President Recep Tayyip Erdogan also recently said the order to murder Khashoggi came from "the highest levels" of the Saudi government, but not from Saudi King Salman.

Ultimately, Juneau said Trump's statement demonstrates that the US will not pressure Saudi Arabia over Khashoggi's murder, despite ongoing pressure to do just that.

"Don't expect this Administration to move to pressure Saudi [Arabia] or to change things," he wrote on Twitter.

9. Saudi Arabia is not an ally; the US does not have an alliance with it. It is a partner.
Conclusion: I could add many other rebuttals. Bottomline, a pile of lies, BS, and nonsense; don't expect this Administration to move to pressure Saudi or to change things.

Turkey says whoever ordered Khashoggi killing must be held accountable