PARIS — French President Emmanuel Macron wanted to turn this weekends ceremonies marking the centenary of the end of World War I into a stark warning against the return of nationalism — a phenomenon he describes as a threat to global peace in the 21st century.

Instead, the Armistice commemoration looks disturbingly like a victory parade for Russian President Vladimir Putin, who will bask center-stage among the 60 heads of state and government invited to Paris, looking stronger than his Western rivals despite the annexation of Crimea, destabilization of eastern Ukraine, partition of Georgia, intervention in Syria, cyber warfare and the clumsy skullduggery of his secret agents abroad.

U.S. President Donald Trump, who will also be present, has just taken a hit, losing control of the House of Representatives to the opposition Democrats, after two years of a chaotic presidency that has shaken the liberal international order and divided the West due to his “America first” policies. With his wings clipped at home, Trump may resort to still more to disruptive foreign policy tactics.

German Chancellor Angela Merkel, seen by many after Trumps election as the default leader of the free world, is now a lame duck whose power is waning after she stepped down as party leader following disastrous regional election results. British Prime Minister Theresa May is under fire from all sides as she struggles to manage the U.K.s fraught exit from the European Union. Italy is governed by populists at odds with the EU over migration and budget discipline.

And Macron himself, seen as Europes great liberal hope a year ago with his ambitious reform agenda has gained little traction for his proposals for closer EU integration. Hes now battling a rapid loss of popularity at home among voters angry at his perceived arrogance and meager results.

Jupiter, as Macron depicts his presidential role, has been brought down to earth with a bump.

All week, the French leader has been touring battlefields across northern France, honoring the millions of dead of the 1914-1918 carnage and warning that the world may be sleepwalking toward another deadly conflict due to the return of nationalism and the weakening of the rules-based international order.

On this somber anniversary, there is an eerie sense that, in the words of U.S. historian Robert Kagan, “the jungle is growing back” and that the liberal order upheld for seven decades by the United States is being eroded by great power rivalry, trade protectionism, a decline in democracy and a drift towards authoritarian populist rule.

“Im struck by the similarity between the period we are living through and the inter-war years,” Macron told the daily Ouest-France. “Europe faces a risk of being dismembered by the leprosy of nationalism and being shunted aside by outside powers, and hence of losing its sovereignty.”

He called this week for a “European army” capable of protecting the Continent against potential threats from Russia, China and others — if necessary without the United States, whose commitment to NATO has been called into question by Trump. 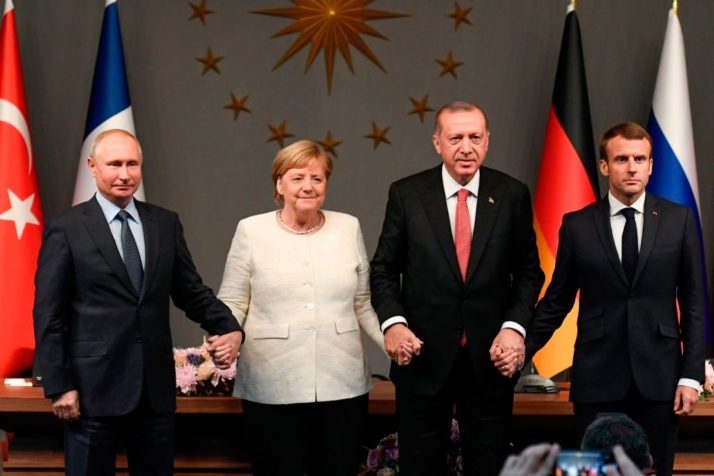 Macrons stark message — designed in part to frame next years European Parliament elections as a straight fight between pro-European “progressives” led by himself and Euroskeptic populists — has been drowned out by complaints from citizens he met on his walkabouts about fuel prices, the increased tax bite on pensions, and stagnant living standards.

Jupiter, as Macron depicts his presidential role, has been brought down to earth with a bump.

Summit diplomacy is the way French leaders traditionally distract their grumpy electorate from such everyday concerns. So Sundays memorial ceremony at the tomb of the unknown soldier beneath the Arc de Triomphe will be followed by the opening of a three-day Paris Peace Forum intended to produce practical initiatives to shore up multilateral governance.

U.N. Secretary-General Antonio Guterres, Merkel and Macron will inaugurate the forum, which is meant to engage governments, civil society and business around projects to help fight climate change, strengthen the World Trade Organization, create a governance framework for the cyber universe or help trace migrants. These are all areas where Trumps policies have disrupted the rules-based order.

But Putins presence will strike a different note. Moscows seizure of Crimea and subsequent military action in eastern Ukraine is the very definition of a flagrant violation of the rules. Russias actions plunged East-West relations to their lowest point since the Cold War, prompting Western economic sanctions and a turnaround in defense spending.

And yet, Putin made no concessions on Ukraine or Syria to secure his invitation to Macrons occasion. Two years after he had to cancel a visit to Paris to inaugurate a gold-domed Russian Orthodox cathedral and cultural center near the Eiffel Tower after the seizure of Crimea, the Russian leader can savor his revenge. “Putin is winning in Ukraine, he is winning in Georgia and he is winning in Syria, so why should he give anything to the French?” said a wary Central European diplomat.

French officials argue that the current Western policy mix has failed to bring about any change in Russian behavior.

Macron had aired more ambitious ideas over the summer for bringing Russia in from the cold, calling for a “new security architecture for Europe” and for engaging Moscow in a “strategic partnership,” including in military matters. The French leader, who sees Russia as indispensable to stabilizing the Middle East, said the Kremlin would first have to make substantial progress by allowing international observers along the Ukraine-Russia border.

French officials argue that the current Western policy mix has failed to bring about any change in Russian behavior, and it must be worth another try to overcome a quarter century of mutual misunderstanding since the collapse of the Soviet Union.

Yet the outing of the GRU military intelligence service over the attempted poisoning of a former Russian double agent and his daughter in Britain, a thwarted cyberattack on the international chemical weapons watchdog in the Netherlands, and the exposure of Russian meddling in Western elections scuppered any prospect of a wider reset with Moscow.

This is no time for the beginning of a beautiful friendship. Much of Central, Eastern and Northern Europe, including non-NATO Sweden and Finland, sees Russia as the chief threat rather than the solution to Europes security problems.

Without significant concessions from Putin, any outreach to Russia will only fuel suspicion that behind Macrons lofty talk of a more sovereign, protective and autonomous Europe lies a long-standing French ambition to elbow Washington and London aside and build ties with Moscow.

Read this next: Matteo Salvini, peacemaker (of sorts)