MADRID — For years, Spain was spared the type of far-right political movement that has spread across Europe like wildfire.

Social scientists explained the phenomenon by pointing to Spains all-too recent experience with fascism under dictator Francisco Franco. For most Spaniards, those memories are still vivid. Many also have family members who emigrated to other European countries or to Latin America and tend to be more sympathetic toward new immigrants coming to Spain.

Spain is also overwhelming pro-European. The Spanish lost their empire long ago, in 1898, and developed a strong conviction that closing off the country from the rest of the world would bring trouble. Most in the country stick to a dictum coined by the Spanish philosopher José Ortega y Gasset: “Spain is the problem, and Europe is the solution.”

Now, it seems, Spanish exceptionalism is over. The question now is: What happens next?

The first, and most important, factor in the partys rise is the political fight over the future of Catalonia.

The party jumped from 0.2 percent of the vote in the last general election in 2016 to 10.3 percent — and now has 24 members of parliament. They also made significant gains in regional elections in December in Andalusia, winning 12 seats.

Its an improbable result in a country that appeared immune to the political winds buffeting the rest of Europe.

So where did their momentum come from?

The first, and most important, factor in the partys rise is the political fight over the future of Catalonia.

Most Spaniards saw the Catalan governments attempted unilateral declaration of independence in 2017 as an attack against their country. Many supporters of the conservative Popular Party, in particular, felt that then Prime Minister Mariano Rajoy was too soft on the Catalan separatists: Instead of acting decisively, he had let things slip out of control and strengthened the separatists hand, to the point where they organized a referendum on the regions independence considered illegal by the Constitutional Court of Spain.

Disaffected PP voters instead turned to Vox, which has vowed to fix Spains semi-federal system. It argues that regions have too much power — Catalonia has its own police force, for example, and schools dont always teach in Spanish — and has called for the state to take back control over key competences.

Vox also won supporters by overtly advocating a sense of pride in being Spanish and embracing the Spanish flag, which is ubiquitous at its rallies. Other parties, including the PP, historically have shied away from the flag — still seen as a symbol of reactionary Spain — and dont use it nearly as much, allowing Vox to brand the PP as Spains “coward right,” for failing to defend Spanish identity with the same zeal.

The message is clear: Spaniards should stop feeling guilty about their history. The party rejects Ortega y Gassets assessment: Spain, according to Vox, is not a problem that needs fixing.

For Vox, the countrys real problem is a political establishment that has become too progressive, and therefore too un-Spanish. As with other far-right parties across Europe, part of its success comes from its ability to resurrect a set of latent reactionary instincts that were long confined to the private sphere. 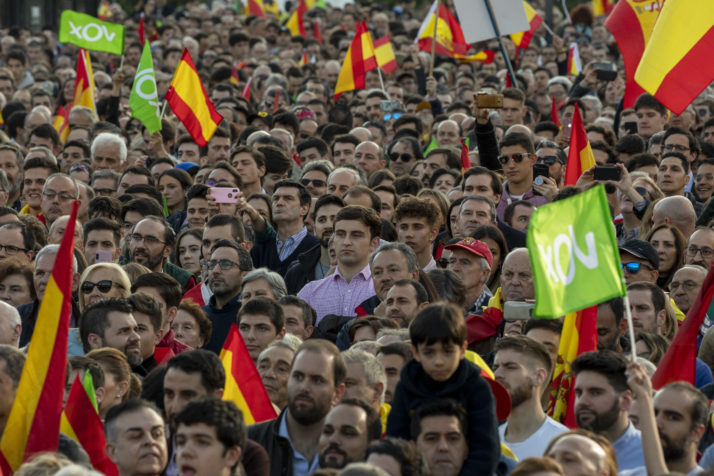 Vox argues that Spains political elite — in which it includes all mainstream parties — has imposed a post-modern, progressive dictatorship on the country under which you cant speak out against a womans right to have an abortion, or gay marriage, multiculturalism, bans on bull fighting and restrictions on hunting. Efforts by so-called feminazis to achieve

How Germany went wobbly on the West