UPDATED at 11:55AM: Fox Searchlight’s The Shape of Water topped a busy weekend full of high-profile limited-release debuts, including a modest start for Woody Allen’s latest, Wonder Wheel and a much more promising one for James Franco’s The Disaster Artist.

Shape, Guillermo del Toro’s adventure-fantasy starring Sally Hawkins, Michael Shannon and Octavia Spencer, had a robust start in just two New York theaters, grossing $166,800 for a strong $83,400 per-theater average, the highest of the weekend and the fourth-best of 2017. The No. 2 title was Sony Classics’ Call Me By Your Name, which opened last weekend with the year’s highest PTA. It held very well in four locations, grossing more than $281K.

A24’s highly anticipated The Disaster Artist launched in 19 nationwide sites, grossing more than $1.22M, one of only six titles ever to open in more than 10 theaters and gross an average north of $60K. Amazon Studios bowed Allen’s Wonder Wheel, which features Kate Winslet in an acclaimed lead turn, and took in $140,555 in five locations. The film represents a key moment in the evolution of Amazon Studios as it is the outfit’s first solo outing without a distribution partner.

“We’re ecstatic with it,” said Searchlight’s Frank Rodriguez of Shape‘s launch. “It’s been a great few weeks with this and Three Billboards, so we’re feeling we’re back on track. And we think there may be some awards attention.” Rodriguez said The Shape of Water had “turn away business” at both of its New York locations over the weekend both uptown at Lincoln Square and downtown at the Angelika Film Center.

“There are a lot of great movies out there right now,” added Rodriguez. “If they’re turned away this week, they’ll come back next week. We had Q&As in both places over the weekend. [del Toro] has adoring audiences, they love being in the same room with the guy.” Rodriguez added that younger audiences, primarily downtown, filled seats, while older cinephiles packed uptown, though the age range in both places were broad. “Cinephiles know it won the Golden Lion in Venice,” he said. “We’ve been getting calls from exhibitors who are eager to add this.”

Fox Searchlight will add 35 more theatres in 12 cities for The Shape of Water in its second weekend, including Los Angeles, San Francisco, Boston and Austin. Searchlight will expand it to 700 to 800 runs by Christmastime.

“Critics have hailed the film as hilarious and heartfelt with an iconic performance from James Franco. Audiences turned out in kind with raucous sell out shows reported in all 12 opening markets,” the company said Sunday. “Exit polling showed sensational word of mouth across the board as audiences truly embraced this lovable comedy about following your dreams against all odds.” The Disaster Artist will expand significantly to about 800 theaters next weekend and continue to grow into the holidays.

Wonder Wheel‘s per-theatre average of $28,111 is well below that of Allen’s previous release, Cafe Society, which opened in July 2016 also in five locations. That title grossed more than $359K in its opening frame, averaging $71,858. It had comparatively bigger names, with Steve Carell, Blake Lively and Kristen Stewart, and also better critical reviews.

Wonder Wheel’s weekend numbers are more in line with Allen’s 2015 release, Irrational Man, which opened in seven locations in the summer of that year, averaging a bit more than $25K. The title will expand to the top 10 markets next weekend and will go nationwide in its third frame.

Among other openers, Janus Films rolled out The Other Side of Hope in three locations, grossing just over $17K ($5,684 PTA), while Abramorama and Mongrel Media opened doc Big Time with two runs, grossing $7,571 ($3,786 average).

Call Me By Your Name, which won the Gotham Award for Best Feature last Monday, remained in four theatres, dipping 31% from its torrid start last weekend to average $70,320. Its cume stands at $908,175.

Focus Features also held steady with four locations for Darkest Hour, which grossed $109K, averaging a very solid $27,150. Focus said it will expand the title to about 50 theaters in the top 10 markets next weekend.

Bleecker Street added 47 theaters for The Man Who Invented Christmas in its second weekend. The feature starring Dan Stevens, Christopher Plummer and Jonathan Pryce grossed just over $863K in 673 theaters, averaging $1,282. In its debut, the film took in over $1.34M in 626 locations, averaging $2,146. It has cumed over $3.15M.

Among other holdovers, Cohen Media Group’s Faces Places crossed a half million this past week. Friday to Sunday, the doc grossed $16,105 in 13 locations, averaging $533 and bringing its cume to $520,758.

Good Deed Entertainment’s Loving Vincent went over $5.5M in its 11th weekend of release. It is only the fourth animated feature rated PG-13 or R in the last five years (along with Sausage Party, Un Gallo con Muchos Huevos, and The Wind Rises) to earn $5 million-plus in U.S. theaters.

“Loving Vincent impacted all of us at Good Deed deeply with its unique artistry and story-telling,” said Scott Donley, the distributor’s CEO and founder. “We believe film fans are clearly seeking unique experiences, and this film gives that to moviegoers. The continued growth is amazing and we will continue working hard at pushing the film across the country to new audiences; we are proud of the film’s accomplishments.”

And Focus Features’ Victoria And Abdul with Judi Dench crossed another milestone over the weekend even as it winds down its theatrical run, passing $22M in week 11 of its release. The title grossed $65K in 131 theaters over the weekend, averaging $496. 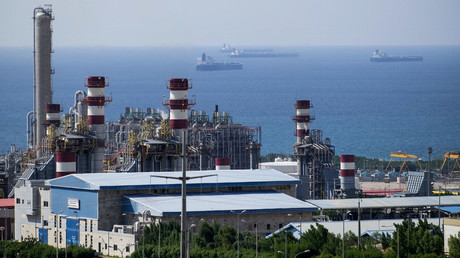 Can US bring Iranian oil exports to zero?

Editor’s Notes: The City’s right to warn the EU against its own complacency