Just as expected: OPEC and the group of non-OPEC countries led by Russia extended their production cuts for an additional nine months through the end of 2018.

“It’s been a good long day… in fact, it’s been a great day,” Saudi oil minister Khalid Al-Falih said at the presser. “I’m pleased to announce the decision has been unanimous.” The deal to cut 1.2 mb/d from OPEC, plus nearly 0.6 mb/d from non-OPEC countries, will run from January to December 2018.

Assuaging some concerns from the Russian delegation, the deal also included a review of the production limits at the next official OPEC meeting in June. That opens up the possibility of removing or adjusting the agreement in six months’ time, although because OPEC meets every six months anyway to roll over the deal, this is a somewhat redundant statement. Al-Falih said the group will be “agile” and “on its toes,” ready to respond if market conditions change significantly.

There were some fears that Russia could spoil the party as the meeting date drew near, but at the press conference, Al-Falih said there was “no light between Russia and Saudi Arabia,” and that they are completely united. Al-Falih said he would be “breathing down the necks of the other 24” participants to make sure they remain in compliance with the agreement.

There were a few other morsels of interest in the announcement. Libya and Nigeria agreed not to boost their production in 2018 above their 2017 levels, a soft cap on their output after being fully exempted from the cuts for the past year. Both countries have seen their output levels ebb and flow, but the agreement to restrain production is something new. It won’t really change the supply/demand balance as it currently is, though it could prevent new supply from hitting the market in 2018 from those two countries. Al-Falih said this will prevent any “surprises” to the oil market in 2018, avoiding the scenario that played out this year with the sudden restoration of output from the two countries.

That, in theory, would count as a bullish surprise for the oil market, but judging by the tepid movement in spot prices, oil traders snoozed through the meeting, since they had basically priced this outcome into the market, so little changed.

Meanwhile, before OPEC went before the cameras for its official press announcement, word came from the EIA that US oil production surged in September, jumping by a massive 290,000 bpd from a month earlier, hitting 9.48 mb/d. That figure seems to put to rest a lot of questions about the EIA overestimating US oil production in its weekly surveys, which have consistently come in much higher than the more accurate monthly figures. The production numbers for September go a long way toward backing up the notion that the US shale industry shifted into expansion after prices jumped above $50 per barrel.

The data release on the same day that OPEC agreed to an extension was probably met with some unease by the cartel. Several members have been wary of incentivizing a strong drilling response from the Texas shale fields, so the fact that we now know that production ramped up dramatically in September as prices rose should dampen OPEC’s enthusiasm. 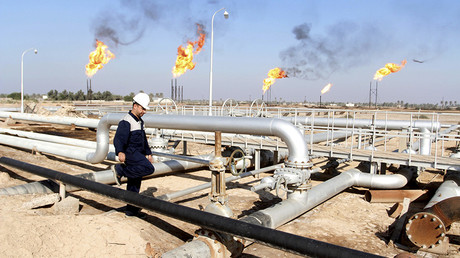 If the OPEC/non-OPEC coalition keeps 1.8 mb/d of supply off of the market for another year, there’s no doubt they will bring the market back into balance and potentially even overshoot and push things too far. WTI could bounce above $60, which could spark an even stronger drilling response from US shale, potentially undermining OPEC’s objective.

For a taste of what’s in store, Rystad Energy, for example, predicts that the US will hit 9.9 mb/d by the end of 2017, which will give US shale a lot of momentum heading into next year.

When asked about the rapid comeback of US shale, Al-Falih cited the dramatic decline from conventional and mature oil fields, a depletion rate that means each year the market needs several million barrels per day of fresh supply. He said he doesn’t think “shale can carry the load,” meaning that even a robust response from US shale will be soaked up by the market due to growing demand and depletion from mature fields.

Presumably, however, OPEC and Russia concluded that they had to continue with the cuts to avoid a selloff in prices. They cited the enormous progress in cutting inventories, but said there is more work to do. They expect that to happen by mid-2018 or so. But will US shale spoil these plans?

Philip Hammond to set aside £3B more for Brexit preparations