The natural gas market in Europe suddenly got a lot tighter this week, with two unexpected supply outages wreaking havoc across the continent, forcing Italy to declare a state of emergency.

The first incident that made big headlines was the crack in the Forties pipeline in the North Sea, which caused Brent crude oil prices to immediately spike. The outage of the crucial 450,000 bpd pipeline sent a jolt through the oil market and was felt around the world, not only because it interrupted oil flows but also because of the influence the pipeline system has on the Brent futures contract.

But the shuttering of the pipeline system will also affect natural gas.

At least two UK natural gas fields – the Elgin-Franklin and Britannia – were forced to shut down because of the outage at the Forties system. Those two fields produce a combined 20 million cubic meters of natural gas per day (million cu m/d), according to S&P Global Platts. Add in maintenance at the North Morecambe field and the UK is currently down 27 million cu m/d.

Meanwhile, some unrelated problems due to a power outage at the Norwegian Troll field in the North Sea – Europe’s largest offshore natural gas field – knocked an additional 47 million cu m/d offline, although only for a brief period of time. Piling on, the Netherlands had to briefly reduce gas shipments to the UK because of problems with a compression station.

Because the UK doesn’t have nearly as much storage capacity for gas as parts of continental Europe, the disruptions will immediately translate into higher prices. UK natural gas futures for front-month contracts spiked by 23 percent to $9.86/MMBtu, according to Bloomberg. That is the highest price in four years. Wood Mackenzie estimates the UK may have lost the equivalent of about 10 percent of winter demand from the outage at the Forties pipeline system.

The UK may have to turn to imported LNG, which could push up LNG prices as it competes for cargoes with Asia. That could work to the benefit of US LNG shippers. The US is about to power up a new LNG export facility at Cove Point, run by Dominion Energy, located 60 miles outside of Washington DC. Cove Point could be attractive to UK buyers because it would have shorter shipping times to Europe relative to Cheniere Energy’s Sabine Pass facility on the Gulf Coast. “The good news is Europe will not "freeze in the dark," the bad news is keeping the lights and the heat on may not be pretty,” Zach Allen, president of vessel-tracking company Pan Eurasian Enterprises, told Bloomberg.

Bloomberg says that UK gas supplies are even more stretched because Centrica plans on shutting down the country’s largest gas storage site after 30 years of operation. 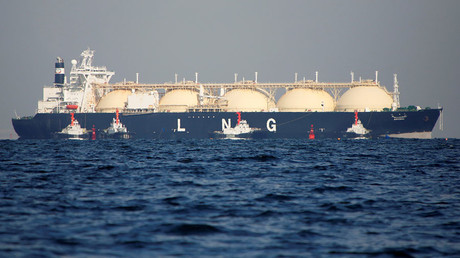 The second major event that struck the European gas market this week was an explosion in Austria at a key gas hub in Baumgarten that killed one person and injured nearly two dozen. The explosion completely interrupted all gas flow from Russia into Italy, forcing the Italian government to declare a state of emergency amidst feared shortages. Gas prices in Italy immediately spiked, rising by as much as 87 percent. Russia’s Gazprom looked to reroute gas elsewhere to ensure the continent had adequate supply.

But for Italy, the problem was immediately serious. “Italy has limited flexibility for making up the 108 million cu m/d shortfall, with other pipeline supplies running at maximum,” S&P Global Platts said. The outage, however, was only expected to last several hours as a workaround was being implemented. “We managed to technically isolate the affected area,” said Stefan Wagenhofer, managing director of Gas Connect Austria GmbH, according to Bloomberg. Gas flows from Russia would be diverted around the outage and would “resume transit within hours.”

The outages come as a cold snap hit the UK and other parts of Europe. “The European gas market seems to be going through a perfect storm,” Massimo Di-Odoardo, an analyst at Wood Mackenzie Ltd., told Bloomberg.

Although the UK and Italy were on the frontlines of the shortages, the effects rippled across the continent. German power futures, according to Bloomberg, jumped by more than 3 percent. Coal prices also jumped, rising to their highest price in more than four and a half years as the markets expected to call upon more coal plants due to the gas interruptions.

The confluence of events could mean that natural gas prices remain elevated throughout the winter.

Joy in bankville over Basel deal