The IOC decision to ban the Russian flag and anthem at the 2018 Olympics was “tough,” but its hockey team will be recognizable even without their red jerseys, International Ice Hockey Federation chief Rene Fazel told RT.

“There was some wrongdoing (on the part of Russia). Nobody will say something against that. But 50 days before the start of the Games… not giving the country the right to use the flag and the anthem. It’s a very-very tough decision,” Fazel said, commenting on the International Olympic Committee banning the Russian official delegation from going to the PyeongChang Games in February over doping accusations. The IOC only allowed “clean” Russian athletes to take part in the Olympics independently.

“I would say that the follow-up of the decision to actually manage this in a way to bring a hockey team (Russia) to PyeongChang is not easy,” he said. According to the hockey boss, it was a rather difficult task to tell the Russian men’s hockey team, “which was clean at the Olympics in Sochi… that you can go to the Olympics, but without your flag and anthem.”

The International Ice Hockey Federation is going to obey and “respect” the IOC ruling on Russia, he said. “The IOC executive board has made a decision and we have to follow up, even if I’m not happy about that,” Fazel said, adding that “we have to keep the collateral damage as small as possible.” 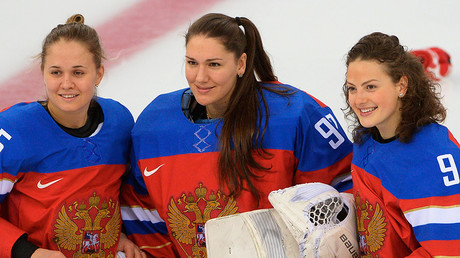 Fazel added that the hockey federations of other countries represented at the Olympics “are all supporting and showing support to the Russian Ice Hockey Federation. And that for me, it’s a very good sign that, in ice hockey, we have this family spirit.”

He also said that he understood that Olympic ban was “not easy to accept” for the Russians as Moscow blasted the ruling as unfair and politically motivated. According to Fazel, the Russian reaction was justified as “if they’d accepted that easily it would’ve been a wrong signal. It shows that you (Russians) have your national pride.”

Earlier this month, the IOC sanctioned Russia based on the results of the investigation by the IOC Disciplinary Commission led by Denis Oswald, which, according to Olympic chiefs, confirmed “the systematic manipulation of the anti-doping rules and system in Russia.”

Fazel also addressed the fate of Russian women’s hockey squad, which had several players banned over doping accusations and its result at the home Games in Sochi 2014 annulled. The hockey boss said it wasn’t yet clear “if the players that played in Sochi could participate in South Korea,” but promised that the IOC and IIHF will rule on the issue early next week. “In principle, if everything is going well they should participate in the Games,” he added.

“It will be a pretty good hockey tournament” in PyeongChang, despite the National Hockey League not allowing its players to participate at the Games in South Korea, Fazel said. He said that the Olympic hockey tournament was being held since 1920 and the guys from the NHL only started appearing in it from 1988. However, he acknowledged that the absence of the stars from the North American league was “a disappointment for me, but it’s a real disappointment for the hockey fans.”

When is Tottenham vs Rochdale? TV channel, date, kick-off time and odds for FA Cup replay