TOKYO — Japans Shinzō Abe probably embraced Donald Trump faster, and with more warmth, than any other foreign leader after the reality TV star shocked the world with his upset victory in the 2016 U.S. presidential election.

On March 25, the Japanese prime minister lunched with Barack Obama in Tokyo, setting off warm reminiscences of their “sushi summits” in the local press. For Abe, the reunion was the political equivalent of comfort food.

The 14 months since Trump stomped into the White House have been a different kind of raw for the Japanese establishment — and increasingly unappetizing for a government that prizes strong U.S. ties above any other relationship.

Dating back to the 1980s, Trump was among Americas most vocal Japan critics. In 1989, the real estate mogul said Japan “systematically sucked the blood out of America” and called for a 20 percent tariff on all its goods. On the campaign trail, candidate Trump called for Japan to pay more for Washingtons security blanket — saying “we cant afford to do it anymore” — and raised the specter of Tokyo developing its own nuclear weapons.

When Trump defeated Hillary Clinton on November 8, 2016, Abes government was as shocked as any. In fact, when Abe had visited New York 50 days earlier, then-frontrunner Clinton was his first port of call. Trump Tower, just a few blocks away, didnt make the cut. But priorities changed rapidly. Just nine days after the billionaire trumped Clinton, Abe became the first world leader to visit Trump Tower — and for what may end up being the biggest blunder of his premiership.

That day, Abe unequivocally vouched for the “America First” president. “I am convinced Mr. Trump is a leader in whom I can have great confidence” and “a relationship of trust,” Abe told reporters. Japanologists lined up to applaud the two mens budding bromance, believing it would protect the Japan-U.S. alliance and accord Tokyo preferential Trump treatment. As Columbia University Japan expert Gerald Curtis put it at the time, “Abe has succeeded in getting Trump to drop his campaign rhetoric about Japan and has gotten their relationship off to a good start.”

But as Trump wages an escalating trade war, threatens actual combat in North Asia and fawns over authoritarian leaders, Abes bet on the new American president is looking worse by the day. In a March 29 editorial, Nikkei Asian Review captured the zeitgeist here as it warned that Abes foreign policy is “on the rocks as U.S. sets off alone.” Here are three ways Tokyos bet on Trump has gone awry.

The first hints Abe miscalculated came when Trump, three days into his term, withdrew from the Trans-Pacific Partnership. Abe joining Obamas TPP was an epochal moment for Japan Inc., which spent decades reinforcing trade barriers. On the table at those Obama-Abe “sushi summits” was Washingtons belief that Japans rigid economy needed a supply-side shock. The U.S. knew, too, that any 12-nation pact meant to check Chinas influence was pointless without Asias No. 2 economy. Abe signed on with his trusted ally — only to see Trump say “never mind.”

Since then, Trump has announced a series of tariffs — including levies of 25 percent on imported steel and 10 percent on aluminum — that shoulder-checked the global financial system. Not only was Abe, supposedly Trumps best pal among world leaders, caught flatfooted, but Tokyo was left off the list of exempted countries.

Team Trump also killed the 23-year-old strong-dollar policy, imperiling Abes reflation scheme. Since December 2012, a declining yen was the centerpiece of so-called Abenomics, boosting exports and pumping up corporate profits. Since January 1, the yen has rallied more than 6 precent, casting doubt on the outlook for Abes signature policy.

“Poor Abe — imagining that kowtowing to The Donald would work out,” said Jeff Kingston, director of Asian studies at Temple Universitys Tokyo campus. “Seldom,” he added, “has such craven sucking up been so unceremoniously brushed off like unwanted lint.”

2) Cozying up to North Korea

Abe could be excused for feeling whiplash over Trumps pendulum approach to Pyongyang. First, Abe scrambled to adjust to Trumps “fire and fury” rhetoric and assurances his generals are “totally prepared for numerous things.” Tokyo was out of the loop again as Trump suddenly agreed to meet with Kim Jong Un.

Now, the pendulum may be swinging back to confrontation with the selection of John Bolton as national security adviser. Hawkish though Abe may be, it petrifies Japan that the author of a February Wall Street Journal column titled “The Legal Case for Striking North Korea First” now has Trumps ear.

National security wags in Tokyo still buzz about April 6, the day Trump fired 59 Tomahawk missiles at Syria, winning effusive praise. That day, arguably, was the high point of Trumps presidency, foreign policy-wise. As scandals and investigations mount, its a high Trump might be keen to relive — this time by firing at a much more dangerous target: North Korea. Abes Japan, a key U.S. ally in striking distance, would be an obvious retaliation target for Kim. 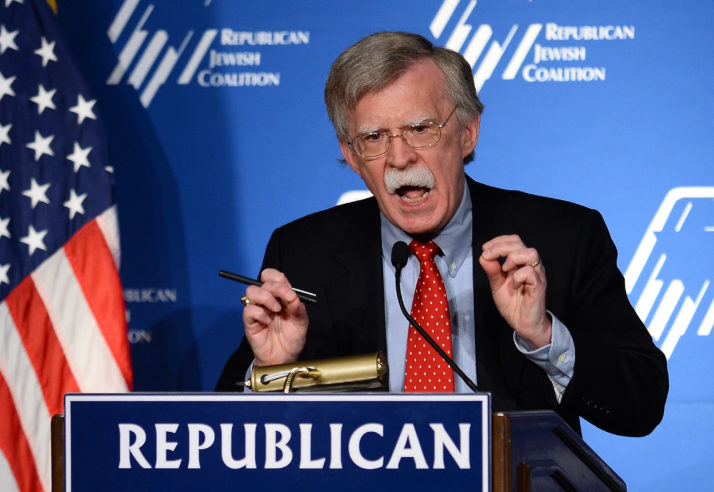 Japan worries, too, that a President Trump anxious to prove his “Art of the Deal” chops might get played in his upcoming talks with Kim. Might he agree to a denuclearization process thats more symbolic than substantive? Would Trump put pulling troops out of, say, Okinawa or Seoul on the table? Abes struggle to school his pal Trump on the existential threats facing Tokyo havent paid off.

Trump rarely encounters a strongman he doesnt love. Vladimir Putin of Russia, Recep Tayyip Erdoğan of Turkey, Rodrigo Duterte of the Philippines, the list goes on. But Xi Jinping is emerging as Trumps primary authoritarian crush. Perhaps its envy that Xi, the strongest Chinese leader since Deng Xiaoping, effectively just became president for as long as he so chooses.

American presidents have long treated Japan as their closest ally in Asia. What if Trump pivoted to China? As Trump told Republican donors at his Mar-a-Lago estate in Florida on March 3: Xi “is now president for life. President for life,” Trump said. “And look, he was able to do that. I think its great.” After months of Trump accusing China of “raping” American workers, Tokyo was floored to hear him, when face to face to Xi in Beijing last November, touting their “great chemistry.” Trump also gave Xi a pass on trade. With the TPP, Obama and Abe endeavored to create a bulwark against Chinas strategic ambitions. Tokyo now worries that a transactional Trump has a Sino-U.S. grand plan in mind, one that cuts Japan out of the action.

Trump might decide the payoff from a China trade deal supersedes any hard feelings in Tokyo. Nothing impresses Trump more than power and scale, both of which Emperor Xis nation boasts in surplus. Befriending Xi also could be a boon for the Trump Organization — new patents for daughter Ivankas fashion and spa brands, waves of financing for son-in-law Jared Kushners interests, a Trump Hotel Shanghai or a Trump Hainan Golf Course. 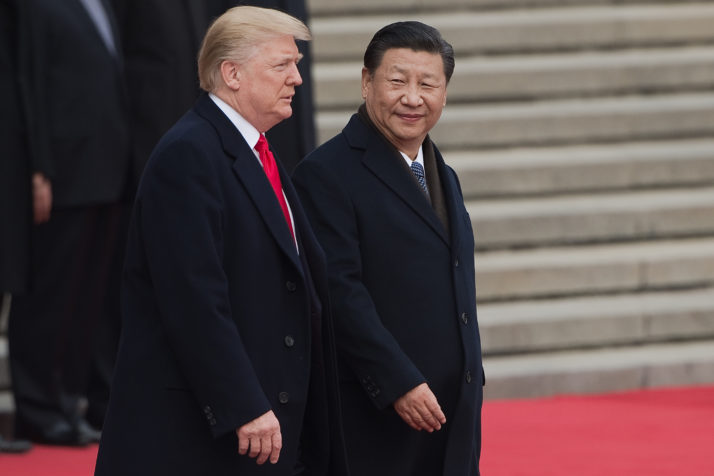 Chinas President Xi Jinping (R) and U.S. President Donald Trump attend a welcome ceremony at the Great Hall of the People in Beijing on November 9, 2017 | Nicolas Asfouri/AFP via Getty Images

Trump prides himself on sizing up opponents. In retrospect, Abes Trump Tower sprint smacks more of desperation and subservience than savvy, something that isnt lost on the president. Increasingly, Japanese voters are sizing up Abes investment in Trump, which compares poorly with the Obama years.

Abes support numbers recently slipped into the 30s, putting him beneath Trump. Some of this reflects a scandal involving the sale of public land at a deep discount to a school company with ties to Abes wife. Yet polls show a negative Trump effect, too. “Abe is now burdened with all the liabilities of a close association with Trump and none of the purported benefits,” said professor Brad Glosserman of Tama University in Tokyo.

Abe could respond by re-energizing TPP and inviting South Korea, Indonesia the Philippines and India to help replace the U.S. in the aggregate. He could pivot to Europe and tap growing Asian markets. He also could redouble efforts at home to rekindle Japans animal spirits with a burst of structural reforms. What he cant do, though, is keep tolerating a White House thats giving Japan a raw deal.

William Pesek is a Tokyo-based author of “Japanization: What the World Can Learn from Japans Lost Decades.” He has been a columnist at Barrons and Bloomberg. 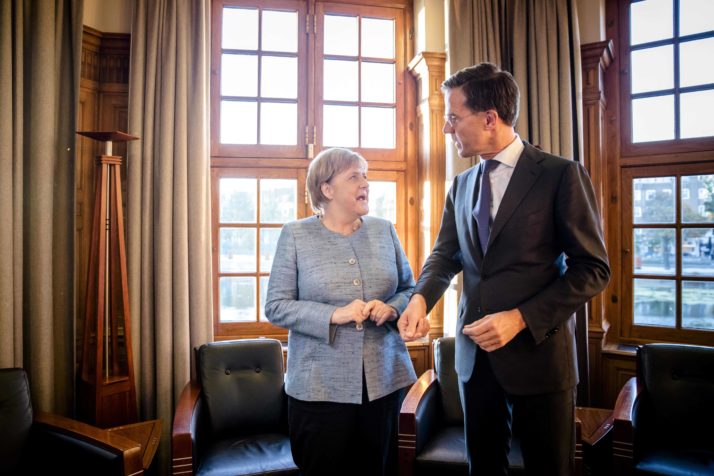