Australia's Commonwealth Bank is set to pay a record fine after it breached anti-money laundering laws.

The bank has said it will pay AUS$700m (£400m) due to its failure to immediately inform authorities of 53,000 suspect transactions.

It blamed the problems on a coding error, but chief executive Matt Comyn said "we fully appreciate the seriousness of the mistakes we made".

The charges mostly relate to undeclared deposits over $10,000. The bank's deposit machines could accept up to $20,000 in cash at a time anonymously.

The fine was agreed in mediation between the bank and the watchdog, and will now need to be approved by a judge.

The scandal is just one of several to hit Commonwealth Bank recently.

Last month it admitted it had lost records of 20m accounts. 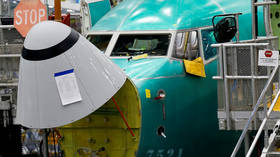 Boeing shares plunge over downgrade due to 737 Max production delays