A further six people were injured, including a child, the spokesman said.Rescue operations started immediately after a small stream near the village of Civita overflowed at 5:30 p.m. local time, he said.More than a hundred emergency rescuers are searching for survivors, the spokesman said, adding that the number of people missing is unknown.According to CNN affiliate Rai, a group of hikers exploring a narrow gorge in the Pollino National Park were caught by surprise by the rapidly rising waters. Among the 23 people rescued so far is a child who was transported to a nearby hospital, Rai reported. The National Alpine Cliff and Cave Rescue Corps (CNSAS) confirmed on Twitter that one child suffering from hypothermia had been evacuated. 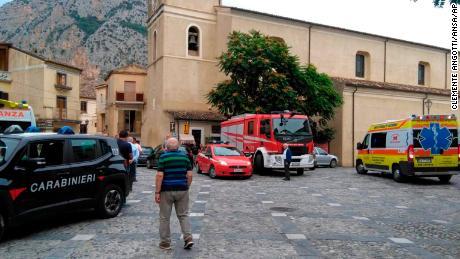 The search for survivors will continue through the night, the head of Civil Protection Calabria, Carlo Tansi, told Rai. "Water rescuers, divers and a helicopter working on Alpine-river operations," Italy's Civil Protection Agency wrote on Twitter Monday evening.According to Rai, rescuers are hopeful that some hikers may have found refuge from the floodwater on rocky ledges in the gorge.