UPDATE: CNN staffers returned to the networks New York building after a phoned-in bomb threat forced evacuation during a live telecast, forcing the network to switch to taped programming.

“The NYPD has now given us the all clear, and employees have been permitted to return to the building,” CNN Worldwide president Jeff Zucker said in an internal memo to staff. “The building is secure and safe for everyone to return in the morning.”

PREVIOUS: The New York CNN headquarters was evacuated Thursday night after a bomb threat, according to tweets from several of its news people.

It was initially unclear whether the threat was against the news network or targeted a nearby location. New York Police investigated, and CNN aired taped programming while that search continued, but then split to live coverage via Skype on the streets.

Shortly before midnight, the all-clear was given and employees were allowed back into the Time Warner Center. Don Lemon, broadcasting from the street, said the NYPD reported a call came in alleging five bombs planted in the building. Nothing was found after a floor-by-floor investigation.

CNN anchor Don Lemon tweeted that CNNs floor in the Time Warner Center was evacuated in the middle of his nightly live show.

We were evacuated in the middle of my live show. Bomb threat. Were running taped programming. NYPD is investigating. Stay tuned. #cnn #nypd

The NYPD is investigating a bomb threat near CNN NYC's office at Columbus Circle. Due to the threat, the office has been evacuated. Right now CNN is airing taped programming due to the disruption.

Around 10:35pm, a bomb threat was called into the Time Warner Center & the building was evacuated. The threat has not been substantiated at this time; were on scene performing a comprehensive sweep-and-search of the facility. Well share more info as it becomes available. pic.twitter.com/VtLL2zmilJ

Trump Is Winning the Trade War with China 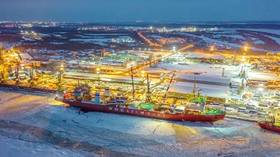