A guide to North Korea’s missiles

Pyongyang's arsenal ranges from short-range Scud-like missiles, to large intercontinental ballistic missiles (ICBM) that may be capable delivering a nuclear warhead to the US mainland. As soon as a missile test is announced, analysts examine the flight of the missile and its trajectory to work out what type of armament was fired, and the potential lessons North Korea could be gleaning from the test. Here are the most commonly used North Korean missiles, based on tests conducted throughout 2017. 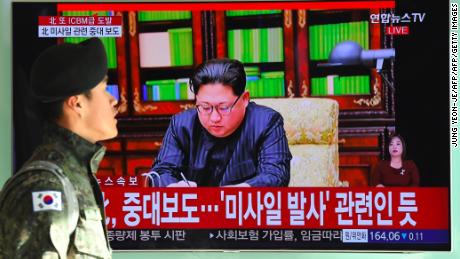 Range: Estimated 13,000 kilometers (8,100 miles)Length: UnknownType: Intercontinental ballistic missile (ICBM) Little is known about the Hwasong-15, which was tested for the first time on November 29, according to North Korean state TV. It set a new height record for a North Korean missile of 4,475 kilometers (2,800 miles) over a distance of 950 kilometers (600 miles).A government statement said the intercontinental ballistic missile (ICBM) is a new type of "ballistic rocket tipped with (a) super-large heavy warhead which is capable of striking the whole mainland of the US." It said the system was more advanced that the Hwasong-14, which was tested in July. With the Hwasong-15, North Korea had met its "goal of the completion of the rocket weaponry system development," the statement said. While North Korean ICBM tests have demonstrated significant potential range, experts have cast doubt on the country's re-entry technology, and whether the missiles could fly anywhere near as far topped with a heavy nuclear warhead. 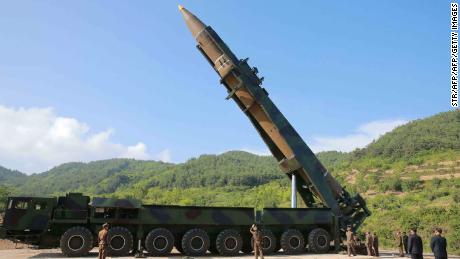 Estimated range: 10,400 kilometers (6,460 miles)Length: 19.5-19.8 meters Type: Intercontinental ballistic missile (ICBM) Previously North Korea's most advanced ICBM, which Pyongyang claimed was capable of reaching "the whole US mainland."Following a test in July, a combination of US, South Korean and Japanese analysis showed the missile flew about 45 minutes, going 3,700 kilometers (2,300 miles) high and for a distance of 1,000 kilometers (621 miles).According to the US-based Nuclear Threat Initiative (NTI), the Hwasong-14 has a maximum estimated range of 10,400 kilometers (6,460 miles).Also referred to as the KN-20, the Missile Defense Project (MDP) says it is a two-stage, liquid-fueled missile capable of carrying a high explosive or nuclear payload. MDP gives a slightly lower range estimate but one that would still put parts of the US West Coast and Alaska within reach. 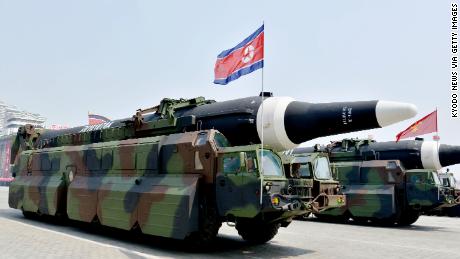 Estimated range: 4,500 kilometers (2,800 miles)Length: 17.4 metersType: Intermediate-range ballistic missile (IRBM)An intermediate-range ballistic missile (IRBM), the Hwasong-12 has an estimated maximum range of over 4,500 kilometers (2,800 miles), which would put the US Pacific territory of Guam within its strike capability. According to MDP, testing of the Hwasong-12, also known as the KN-17, has only succeeded around 50% of the time. A test in April 2017 "flew a distance of 60 km and reached a height of 189 km before starting to 'pinwheel,' landing into the Sea of Japan after 9 minutes of flight time," MDP said. According to North Korean state media, the Hwasong-12 is "capable of carrying a large-size heavy nuclear warhead." 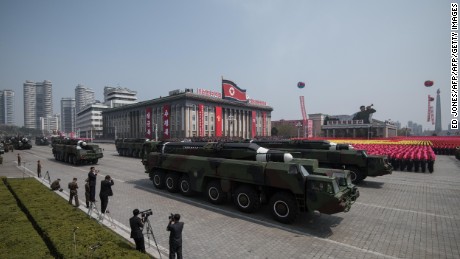 Estimated range: 3,500 kilometers (2,200 miles)Length: 11.5 meters Type: Intermediate-range ballistic missile (IRBM)Another IRBM, the Musudan doesn't quite have the range of the Hwasong-12, topping out at around 3,500 kilometers (2,170 miles), according to NTI. Unlike its larger Hwasong cousins, the Musudan is believed to be road-mobile, making detection of potential launches more difficult. However, despite over a decade of development and repeated tests, the Musudan "barely works," aerospace and rocket expert John Schilling told CNN in January 2017. Of eight tests between 2016 and early 2017, seven failed according to South Korean and US assessments (though North Korea claimed some as successes or partial successes). 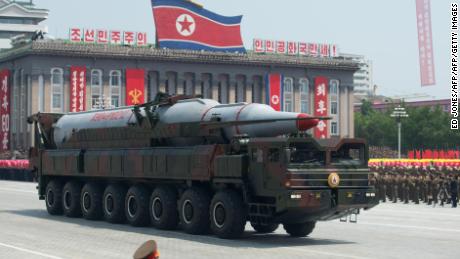 Estimated range: 10,000 kilometers (6,200 miles)Length: 30 metersType: Space launch vehicle (SLV)Alongside its intercontinental and intermediate-range missile programs, North Korea has also developed several long-range rockets designed primarily to deliver satellites to space. In the past, Pyongyang had been accused of using this program to covertly test ICBMs and other weapons technology, though the North Korean government always insisted its space program was peaceful and focused on putting scientific satellites into orbit. Given the open testing of ICBMs and intermediate-range missiles, some analysts have suggested the two programs, if they were ever one, are now "moving on separate tracks." The Taepodong-3, also known as the Unha-3, is a three-stage satellite launch vehicle, with an estimated range of 10,000 kilometers (6,200 miles) with a 1,000 kilogram (2,200 pound) payload, and a maximum range of around 15,000 kilometers (9,320 miles), according to MDP. While the Unha-3 is believed to be primarily non-military, MDP said it is "still possible that North Korea could use the Taepodong-3 as an ICBM and launch an untested re-entry vehicle in the direst of circumstances." 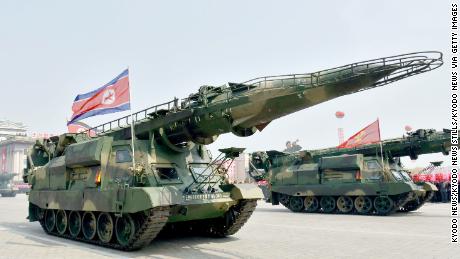 Estimated range: 500 kilometers (310 miles)Length: 12.18 meters Type: Short-range ballistic missile (SRBM)North Korea has a number of short- to medium-range missiles based on the Soviet Scud type design which dates back to the end of World War II. Though Scuds typically carry conventional explosives, they could also be armed with nuclear warheads. Due to their much smaller size, they can also be fired from mobile launchers, making them harder to track and predict. At a military parade in Pyongyang in April 2017, North Korea revealed the KN-18, which MDP estimates has a demonstrated range of around 450 kilometers (280 miles) but may be capable of up to 1,000 kilometers (620 miles). Other North Korean Scud variants have demonstrated this range, such as four which were fired into the sea near Japan in March 2017, after flying over 1,000 kilometers. 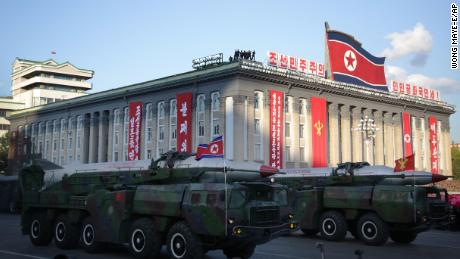 Estimated range: 1,500 kilometers (930 miles)Length: 16 metersType: Medium-range ballistic missile (MRBM)As well as the short-range Scuds and long-range ICBM or IRBMs, North Korea also has several medium-range missiles which can be fired from mobile launchers and may be capable of delivering nuclear or chemical payloads as well as conventional high explosives. The Nodong, one of North Korea's oldest missile designs, has a range of around 1,300-1,500 kilometers (800-930 miles), according to NTI. Also known as the Rodong, the missiles capabilities are such, according to MDP, that it "can only effectively be used against large, soft targets like cities, airports or harbors." "Its range is sufficient to put parts of Japan within striking distance," the group said in a report. "However, the accuracy is extremely low for modern missiles and likely ineffective against hardened military targets, unless it was equipped with a nuclear warhead." 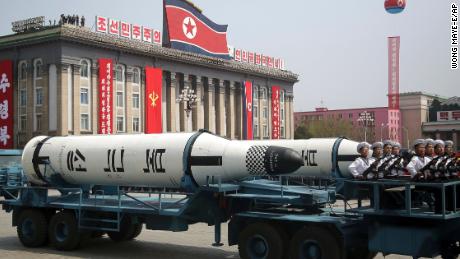 Estimated range: 1,200 kilometers (745 miles)Length: 9 metersType: Submarine-launched ballistic missile (SLBM)While preparations for ICBM or IRBMs are quite labor intensive and may be detected by intelligence services or satellites, missiles launched from mobile platforms or submarines are another matter altogether. The Pukkuksong-1, also referred to as the KN-11, is North Korea's main submarine-launched ballistic missile (SLBM), with an estimated range of around 1,200 kilometers (745 miles), according to MDP. Multiple launches of the KN-11 have been carried out since 2015, with an apparent land-based variant, the Pukkuksong-2, being tested in February 2017. Both variants were displayed at the April 2017 military parade.

Previous post Why a hydrogen bomb makes N Korea more dangerous
Next post Pyongyang: ICBM tested Wednesday is its most powerful missile ever

NEW DELHI: With Unlock 5.0 underway from October 15, more businesses and...