It had been hoped that May would arrive in Brussels on Monday morning with the outlines of a deal that covered the three areas of contention: Britain's financial settlement or "divorce bill"; the rights of European Union citizens in the UK after Brexit and the thorny issue of the Northern Ireland border. But while there were positive noises on the first two issues, the Irish government insisted on Monday that there was still no deal on the border. "Contacts continue at official level in an effort to reach agreement," an Irish government spokesperson told CNN, but added that there was "still some way to go." Helen McEntee, Ireland's Europe minister, told the BBC that a "huge amount of work" had been achieved over the weekend but there was no text to put before the Irish Cabinet, which was meeting Monday morning.With the sides locked in last-ditch negotiations, European parliament's chief Brexit coordinator Guy Verhofstadt said Monday Britain and the EU had yet to strike a deal on the terms of the UK's withdrawal from the bloc. He told reporters that he put the likelihood of a deal at 50/50 when May visits Brussels later Monday.

Ireland wants firm assurances of Britain's intentions for the border when it leaves the EU. Britain has said it will leave both the single market and customs union after Brexit in March 2019 — a move that critics say could lead to a so-called "hard border" between Northern Ireland and Ireland.The issue is sensitive because the absence of border controls and infrastructure was a key part of the Good Friday Agreement that ended decades of sectarian conflict in Northern Ireland.The lack of a deal with the Irish government could further hold up Brexit negotiations. May is due to have a working lunch with EU Commission President Jean-Claude Juncker on Monday and is due to meet the President of the European Council, Donald Tusk, later. Tusk scrapped a scheduled trip to Israel, citing a "critical moment" in Brexit negotiations. An EU official said the trip was abandoned so that Tusk can be available for "consultations on draft guidelines" for potential trade discussions. The EU has repeatedly warned there can be no trade talks until the border problem is resolved.The Irish cabinet assembled for a special meeting on Monday morning, where ministers were to be updated on overnight developments. "These discussions are in a sensitive place right now," Irish Deputy Prime Minister Simon Coveney told RTE Radio 1 on Monday. "Both governments understand what each other is asking for, and obviously there's consultation going on with both governments to try and get that right"Coveney, who is also Foreign Minister, seemed optimistic that the two sides would be able to strike a deal but warned that "our partners across the EU will hold firm with us, if that's necessary." "We're saying need more reassurance before we move on to phase two," he added. 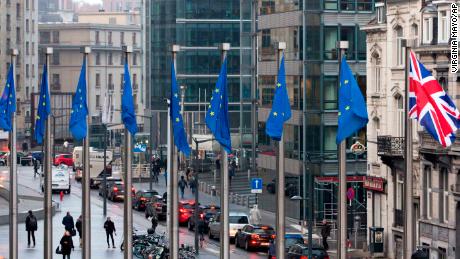 Tusk backed Ireland on Friday, firmly declaring that the Ireland issue must be resolved before any post-Brexit trade discussions can move forward."If the UK offer is unacceptable for Ireland, it will also be unacceptable for the EU," Tusk told reporters in Dublin. "This is why the key to the UK's future lies — in some ways — in Dublin, at least as long as Brexit negotiations continue."May had been given a December 4 ultimatum to offer additional proposals on these sticking points. Monday's meetings were supposed to allow the EU heads of government to determine if "sufficient progress" had been made. If deemed sufficient, they may give the go ahead for negotiations to move on to the future trade relationship between the UK and EU and transitional arrangements at the critical EU summit on December 14.Opinion: Brexit psychodrama going exactly as expectedManfred Weber, leader of the European People's Party in the European Parliament, and a key ally of German Chancellor Angela Merkel, sounded a gloomy note Monday morning."In Brexit negotiations, money is one of the problems, but it is not the biggest one. We are much more concerned about the fact that negotiations are stalled on the protection of EU citizens' rights & on the Irish case," Weber wrote on Twitter. "We will not change our red lines. The lives of millions of families are at stake. If no clear commitment is made, the @EPPGroup will not be ready to assess the progress made as sufficient to enter a 2nd phase of negotiations," he continued. In London, the EU Withdrawal Bill was once again under scrutiny in the House of Commons. On the agenda Monday, lawmakers will be discussing how leaving the bloc is going to affect other parts of the UK, not including England. There is concern from ministers that powers which once resided with the EU will go back to Westminster, rather than transfer to devolved areas. Over the weekend, top Brexit supporters demanded that May stand her ground on "any further financial commitment to the EU until they have agreed that in return, they will meet a number of conditions."Preempting the mid-December summit, the Leave Means Leave group sent a letter outlining several terms, including calling for Britain to be beyond the jurisdiction of the European Court of Justice (ECJ) and for no new EU regulations to apply once Britain exits in March 2019. May has infact promised to end the ECJ's authority in the UK, however she has suggested its remit might continue in some capacity during an "implementation period" past March 2019.

Academic gets 32 years for pedophilia

The secrets of Hungary’s Parliament building