The baby boy was born at the Max Super Specialty Hospital in Shalimar Bagh, New Delhi on November 30 and mistakenly pronounced dead two hours after birth, the boy's grandfather, Praveen Malik, told CNN. The newborn was then moved to the Delhi New Born Center, but unfortunately passed away on Wednesday morning.Speaking with CNN after the baby's death on Wednesday, Malik said the family was devastated. "Our final demand with the government, with the world, is that we need justice," he said. The hospital's license was canceled by the Delhi government Friday. 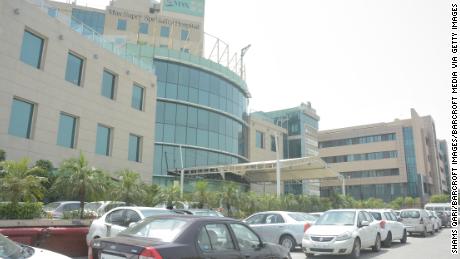 "Delhi is India's capital and as the capital, we have to be exemplary. What happened in this case is unacceptable," said Delhi health minister Satyendar Jain at a press conference on Friday.The cancellation applies to the Max Hospital in Delhi's Shalimar Bagh which is just one branch of the private healthcare chain known as Max Healthcare.Current patients will be offered the opportunity to move facilities and are allowed to continue their treatment, but the hospital cannot accept new patients, added Jain. In response, Max Healthcare said the ruling was harsh and that they have not been given adequate opportunity to be heard."We believe that even if there is an individual error of judgment, holding the hospital responsible is unfair and will severely limit the ability for patients to access treatment," they said in a statement. "This will compound the shortage of hospital facilities in the National Capital."The company added that they will explore all options available to them.

The baby's mother had given birth to twins on November 30 but the girl was declared stillborn. On the way to the cremation ground, approximately two hours later, the family found the boy still breathing after noticing "some movements" inside one of the polythene bags containing the babies' bodies.

"When we opened the bag, we found the boy breathing. I was shocked. I couldn't believe my eyes," Malik said in a previous CNN report.The newborn did eventually pass away days later at the Delhi New Born Center.Dr. Sandeep Gupta, who was treating the baby at the new facility told CNN the baby was 22-weeks premature, which meant the risk he may not survive was always there."We knew from the beginning that he may not survive but we were trying our best, had the baby not been exposed for so many hours after his birth, maybe we could have probably prolonged his life longer," he said.Gupta said the baby died due to multiple organ dysfunction. "He was unable to keep his vitals up."Max Healthcare fired the two doctors considered responsible earlier this week, but emphasized that the decision to let the doctors go should not be interpreted as an admission of guilt. "We wish to clarify that this action should not presuppose finding of any lapse by the expert group and should not be construed in any way to be anything other than an expression of our continued commitment to providing quality healthcare," Max Healthcare said Sunday.

This case of medical negligence has received significant attention from local politicians.State Health Minister Satyendar Jain tweeted last week that he has ordered an inquiry "into this unacceptable act."Delhi Chief Minister Arvind Kejriwal also tweeted saying authorities would take the "strongest action" if someone is found at fault.The Delhi government's preliminary inquiry report was submitted to the Delhi health minister on Tuesday; it found the hospital guilty of not having followed prescribed medical norms when dealing with newborn infants, a Delhi government official who was not authorized to speak on the record about the report told CNN."No ECG (electrocardiography) tracings were done to trace whether the child was alive," the source said, referring to the findings of the initial report. In response to the Delhi government's report, Max Healthcare said in a statement, "We would like to thoroughly review the final report when we receive it before commenting.""In the meantime, we are fully cooperating with all relevant authorities on this issue," the statement said.

‘Time of the essence’: UN official after North Korea trip

Government to use one e-com site for all its purchases