But in South Korea, another deadly weapon is back in the headlines, one that is far easier and cheaper to make: anthrax. This week, the Blue House was forced to deny President Moon Jae-in and other top officials had been vaccinated against the biological weapon. Presidential spokesman Park Soo-hyun said the Korea Centers for Disease Control and Prevention bought 1,000 doses of anthrax vaccines, to be given to biochemical counterterrorism agents or civilians in the case of anthrax exposure. The vaccines arrived in November.Park said the Blue House had bought 350 doses of anthrax vaccine to counter accidental exposure, but he said it was ordered by the previous government led by former President Park Geun-hye after an incident in 2015.Then, it emerged the US military erroneously shipped live anthrax used for research purposes to South Korea, as well as parts of the US, Canada and Australia. The sample sent to South Korea was destroyed and the facility decontaminated.There were no plans to vaccinate the general public, the Blue House spokesman said.Adding to these concerns was a report in the Korean media alleging one of the four North Korean soldiers who defected in 2017 was found to have antibodies to the biological weapon in his system, suggesting he was either vaccinated against anthrax or exposed to it at some point. South Korea's National Intelligence Service told CNN it could not confirm that report. The Defense Ministry said it also could not confirm the report, adding that none of the four military defectors are believed to have worked in North Korea's biochemical warfare unit.

According to the Trump administration's National Security Strategy, released earlier this month, North Korea "has spent hundreds of millions of dollars on nuclear, chemical, and biological weapons" including research into "chemical and biological weapons which could be delivered by missile." In a statement, North Korea's Ministry of Foreign Affairs said such claims were "groundless" and accused the US of attempting to "cook up untruths." As a signatory to the Biological Weapons Convention (BWC), North Korea "maintains its consistent stand to oppose development, manufacture, stockpiling and possession of biological weapons," the statement said. It pointed to US claims Iraq possessed biological agents and other weapons of mass destruction before the invasion of that country in 2003, which were later proven to be "dead wrong," according to a US government commission. Previous US administrations have also accused Pyongyang of developing biological weapons, with a 2004 report from the Deputy Director of National Intelligence saying that after its accession to the BWC in 1987, North Korea continued to pursue research in this area. "North Korea has the scientists and facilities for producing biological products and microorganisms, and has the ability to produce traditional infectious biological warfare agents or toxins," the report said.

There was renewed attention on North Korea's chemical and biological weapons programs this year after the audacious assassination of Kim Jong Nam, half-brother of the North Korean leader, in Kuala Lumpur International Airport. He was killed with the nerve agent VX, allegedly by two women acting on behalf of North Korea. Pyongyang has consistently denied any involvement in Kim's death; lawyers for the women have said they thought they were taking part in a prank TV show. According to a report published in October by researchers at Harvard, "accurately assessing the threat from North Korea's biological weapons program is challenging," as tests can be carried out in secret behind closed-doors, unlike nuclear or missile testing, and many technologies involved can be dual-use, such as for the creation of pesticides. In 2015, North Korean state media published photos of leader Kim Jong Un touring a pesticide facility which experts argued was capable of producing large amounts of biological weapons. "Analysis of the images reveals that the facility — the Pyongyang Bio-technical Institute — can produce regular, military-sized batches of biological weapons, specifically anthrax," Melissa Hanham, a North Korea expert at the James Martin Center for Nonproliferation Studies, wrote at the time. 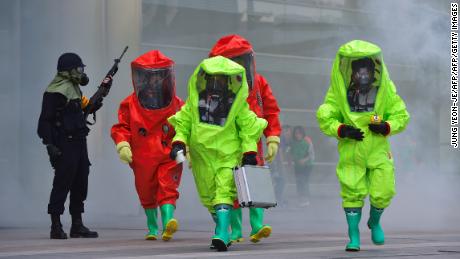 The US Centers for Disease Control categorizes anthrax as a Category A agent: one that poses the greatest possible threat for a negative impact on public health; one that may spread across a large area or need public awareness and requires planning to protect the public's health."The North Korean assertion that the plant is intended to produce insecticides is an old and well-used cover for a biological weapons program," Hanham said, adding the publication of the photos of Kim's tour "may have been intended as a veiled threat to South Korea and the United States." The Harvard report said "decades of open source information affirm that North Korea has held an interest in developing a bioweapons program," and there was evidence Pyongyang possessed the capability to produce, and in some instances weaponize, a number of biological agents, including anthrax, botulism, cholera, plague, and smallpox.

Much about North Korea's biological weapons program is unknown, including whether it is still ongoing: Pyongyang has not been shy in boasting about its weapons capabilities, and it's difficult to judge that being a signatory to the BWC would be enough to encourage it to hide one controversial program while being increasingly open about its nuclear arsenal. However, it's understandable that some in South Korea are fearful. Any conflict with North Korea, whether sparked by Pyongyang, Seoul or Washington, would likely result in devastation for the heavily-populated South Korean capital, at which are aimed thousands of pieces of North Korean artillery, to say nothing of missiles and other weaponry. "Missiles, drones, airplanes, sprayers, and human vectors are potential means of (biological weapons) delivery," the Harvard report said, though it added biological agents are "difficult to keep intact on missile payloads due to heat and changing conditions that can degrade the agent," making far-range delivery unlikely. Manual delivery is perhaps the most difficult to guard against, the report said: "North Korea has 200,000 special forces; even a handful of those special forces armed with (biological weapons) would be enough to devastate South Korea." Kim Jong Un's regime is also believed to have considerable chemical weapons stockpiles, as much as 2,500-5,000 metric tons according to some estimates. Unlike the BWC, Pyongyang is not a signatory to the equivalent Chemical Weapons Convention, though it has denied pursuing such a program. A June report from the Bulletin of Atomic Scientists warned North Korea could hit Seoul with a "sea of sarin" should conflict break out, potentially killing or severely injuring millions of people. Anthrax and similar agents could be equally dangerous, with the Nuclear Threat Initiative warning "gram-for-gram, biological weapons are the deadliest weapons ever produced."

CNN's Sol Han and Jake Kwon contributed to this report.

The post How serious is the North Korean anthrax danger? appeared first on News Wire Now.

No Eid sweets exchanged by BSF with Pakistan; done with Bangladesh