In a ceremony infused with themes of peace and harmony, South Korean President Moon Jae-in twice shook hands with Kim Yo Jong, the sister of North Korean leader Kim Jong Un. US Vice President Mike Pence, sitting a few seats away in the same VIP booth, looked stony faced as the extraordinary scenes unfolded.The unprecedented encounter between the two senior Koreans fueled hopes that the Olympics could succeed where a generation of world leaders has failed — to lay the groundwork, however tentatively, to a process of reconciliation on a peninsula that often appears one wrong move away from nuclear conflict.Minutes into the ceremony, as children skipped through a mythical landscape, Moon greeted Kim Yo Jong and North Korea's 90-year-old ceremonial head of state Kim Yong Nam, the head of the North's Olympic delegation. 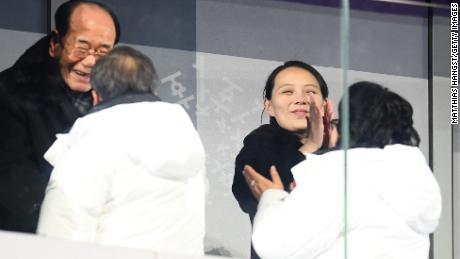 Kim Yo Jong, the first member of the North's ruling dynasty to visit the south since the end of the Korean War in 1953, smiled broadly as they shook hands. Then, the two figures from opposite sides of a divided Korea watched as athletes from their respective nations marched together under a unified flag.

A giant dove lit up the sky, famous South Korean singers sang John Lennon's Imagine and, most significantly of all, athletes from North and South Korea walked in together for the first time in 11 years.The message was not subtle. Drawing on themes of harmony and unity, the ceremony gave Koreans hope — whether or not it lasts — that their nations, still technically at war, may one day find peace. 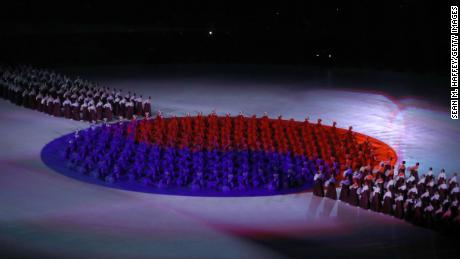 The ceremony involved a starring role for the Games' mascot Soohorang, the white tiger, long been considered a protective guardian in Korean history and culture.In an elaborate finale, pre-taped for the TV broadcast to ensure nothing went wrong, more than 1,200 choreographed drones formed the Olympic rings in the sky. 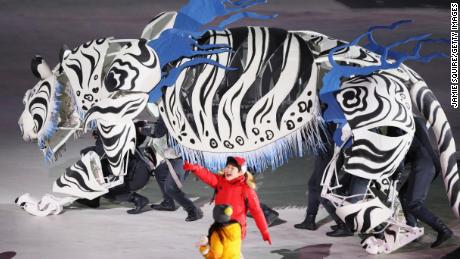 Pence, who has been vocal in his criticism of North Korea in the runup to the Games, sat impassive in the frigid February night, rising only when the US team entered the stadium.The US and North Korean representatives did not speak during the ceremony, and Pence did not attend an earlier dinner where he was due to share a table with North Korea's ceremonial head of state.Moon, however, welcomed Kim enthusiastically, greeting her warmly when she entered the VIP box and then shaking her hand again when North and South Korean athletes entered the stadium together. 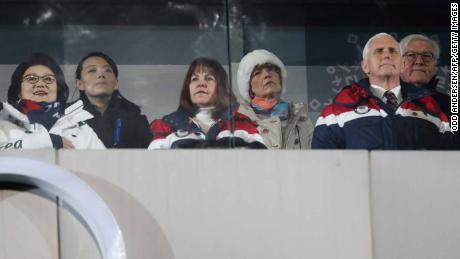 The presence of Kim, who was promoted to the country's Politburo, the senior body of North Korea's communist party, as an alternate member last year, represents a hugely significant move in the thawing of relations between the neighbors.According to diplomatic sources, there is a "good chance" Kim will invite Moon to visit Pyongyang "sometime this year." 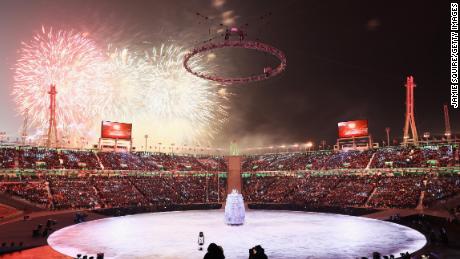 While the sources say "nothing is final," a visit by Moon to North Korea would be the first time a South Korean President has stepped foot in the country since 2007.That invitation could come when Moon and Kim will meet for lunch at the Blue House on Saturday, after the meeting was confirmed by a South Korean presidential spokesperson.

Teams from North and South Korea team entered the arena under the unification flag, a blue silhouette of the peninsula and outlying islands. Athletes from both nations took selfies with each other as they waited to walk into the heart of the stadium.As the Koreans emerged, they were greeted to an ovation from 35,000 cheering spectators. 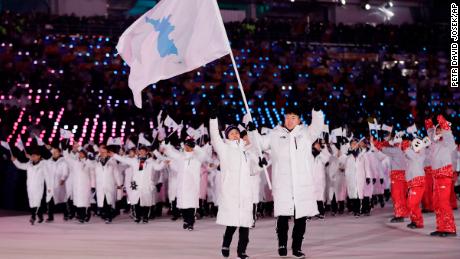 The show of unity and harmony was not lost on Thomas Bach, the President of the International Olympic Committee, who said North and South Korea had set a "great example" for sending "a powerful message of peace.""All the athletes around me, all the spectators here in the stadium, and all Olympic fans watching around the world… we are all touched by this wonderful gesture," Bach said. "We all join and support you in your message of peace".

Pita Taufatofua has never been one to shy away from the big occasion. The Tongan athlete who raised eyebrows for going shirtless while carrying his country's flag during the Olympic Opening Ceremony in Rio two years ago, has done it again. 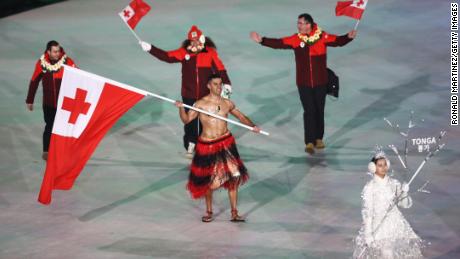 Taufatofua braved the 32˚F cold and again appeared bare-chested, wearing only a traditional Tongan mat. The guy knows he has a brand, and he is sticking to it.The 34-year-old, who competed in taekwondo in Rio, will be going for gold in cross-country skiing in Korea.

It was left to 2010 Olympic figure skating champion Yuna Kim to light the Olympic flame. 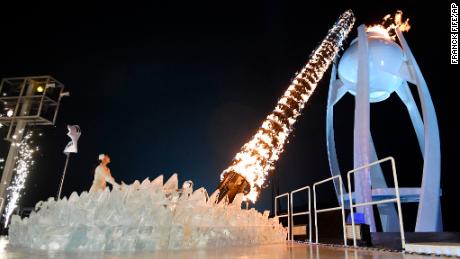 Two members of the joint Korean hockey team carried the Olympic Torch up a steep flight of stairs, after it had passed through the hands of short-track medalist Chun Lee-kyung, golfer Inbee Park and soccer player Ahn Jung-hwan.The torch was then given to Kim, who performed a short skating routine before lighting up Pyeongchang.

Aimee Lewis reported from Pyeongchang and James Masters wrote in London. CNN's Will Ripley and Sophie Jeong in Seoul contributed.

Why Olympic uniform design is so political

US, UK and allies call for prompt Hong Kong elections