A Sudanese court has overturned the death sentence for teenager Noura Hussein, who killed her husband after he raped her, in a case that has put a spotlight on forced child marriage and marital rape in the African nation.Her legal team told CNN on Tuesday that Hussein, now 19, has been given a five-year jail term for killing the 35-year-old man. The court ordered her family to pay 337,000 Sudanese pounds ($18,700) in "blood money" to the man's family. Her lawyers say they plan to appeal both the jail term and the payment.Last week, CNN obtained a first-hand account from the teenager as she awaited retrial in an Omdurman prison cell after appealing her death sentence.In her account, Hussein said her family had forced her to get married at 15, but allowed her to finish school. Three years later, after a public wedding, her husband tried to consummate the marriage. After refusing to have sex with him on their "honeymoon," she says he raped her as members of his family held her down.A day later her husband tried to rape her again, and she stabbed him to death. When she went to her parents for support, they turned her over to the police.In her account, Hussein shared her experience of being forced to live with the man, and how she refused to eat or leave her room in her first days with him.Related: The 11-year-old girl divorcing her 38-year-old husband 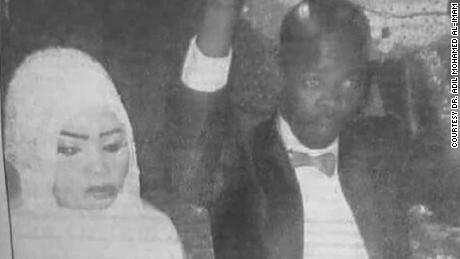 "On the ninth day his relatives came, his uncle told me to go to the bedroom. I said no so he dragged me by my arm into the bedroom and his cousin slapped me. All of them tore at my clothing. His uncle held me down by my legs and each of the other two held down my arms. He stripped and had me while I wept and screamed. Finally, they left the room. I was bleeding, I slept naked," she said. "The next day he grabbed me, threw me on the bed and tried to climb on top of me. I was fighting back and my hand found a knife under the pillow. We began grappling over the knife. He cut my hand and bit down on my shoulder."Read more: In Sudan, the #JusticeForNoura campaign gave a voice to the voicelessThe court made its decision after accepting Hussein's version of events. Key to their decision was accepting that she had found a knife under her pillow before stabbing her husband, and did not take it from the kitchen, as prosecutors originally alleged.The case has sparked international outrage and several petitions worldwide had called for her sentence to be dropped. The legal age to enter into marriage in Sudan is 10 and marital rape is not a crime.In a statement, Amnesty International said that Hussein's case must be a "catalyst for change" in Sudan."While the quashing of this death sentence is hugely welcome news, it must now lead to a legal review to ensure that Noura Hussein is the last person to go through this ordeal," said Seif Magango, Amnesty International's Deputy Regional Director for East Africa, the Horn and the Great Lakes."Noura Hussein was the victim of a brutal attack by her husband and five years' imprisonment for acting in self-defense is a disproportionate punishment. "The Sudanese authorities must take this opportunity to start reforming the laws around child marriage, forced marriage and marital rape, so that victims are not the ones who are penalized."

The As Equals reporting project is funded by the European Journalism Centre via its Innovation in Development Reporting Grant Programme. Click here for more stories like this.