Tomorrow, the first – and last – supermoon of 2017 will be visible in the UK.

Also called the cold moon, the solar spectacle occurs when a full moon coincides with the moon reaching the point in its orbit where it is closest to the earth.

This supermoon is expected to appear about seven per cent larger and 16 per cent brighter than normal, and an optical effect called the moon illusion can make the supermoon appear even bigger just after the sun goes down.

Read more: How to watch the solar eclipse if you're in London

In the UK, the supermoon will reach the peak of its full phase at 3.47pm on 3 December, according to the Met Office.

Are you ready for #Supermoon Sunday? Catch the first supermoon of 2017 on Dec. 3. Curious about this phenomenon? Learn more at https://t.co/Dy7seSjSH2pic.twitter.com/GLxsbGXWvx

However, the moon will reach its closest point to the earth at 9am GMT on 4 December when it will come within just 222,443 miles of the earth.

The question in the UK is whether the skies will be clear enough to see anything, or whether star gazers will left as disappointed as they were during 2015's rain-soaked solar eclipse letdown.

In London, the Met Office said some rain is expected to clear throughout the morning, leaving a dry and milder afternoon with some sunny spells.

Going to miss Sunday's supermoon? Not to worry – Nasa has said there are two more in January and February 2018, so clear your schedule.

Read more: Can't get out to see the supermoon action? We'll bring it to you instead

The government has issued a warning over Russian anti-virus software

Philip Hammond to set aside £3B more for Brexit preparations 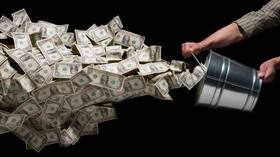