"I'm not sure what decision he'll make. We've given him options," McMaster said. When asked by "Fox News Sunday" host Chris Wallace about Trump's decision-making process, McMaster said the President's advisers have discussed a number of options, and that each of these options will allow the United States to take action concerning Jerusalem in a manner that would "gain momentum toward a peace agreement and solution that works both for Israelis and for Palestinians."Trump could announce as early as Tuesday that the US recognizes Jerusalem as Israel's capital, US officials with direct knowledge of the matter and foreign diplomats have told CNN. Upon making the decision public, Trump is expected to sign a waiver to keep the US embassy in Tel Aviv for another six months, but say his administration will move the diplomatic mission to Jerusalem at some point — a goal long sought by Israel.The State Department's security arm has been told to plan for potentially violent protests at US embassies and consulates once the Trump administration announces it is moving the embassy in Israel to Jerusalem."We were told that this is definitely coming, and we need to be ready for it," one official said.The Diplomatic Security Service, which is charged with protecting US posts and personnel overseas, was already bracing for possible protests after Trump retweeted anti-Muslim videos from the far-right group Britain First on Wednesday.The announcement by Trump would put the US in singular company among its allies. While Israel claims Jerusalem as its seat of government, no foreign embassies are located there, as the international community sees it as an issue to be settled as part of a broader peace agreement. 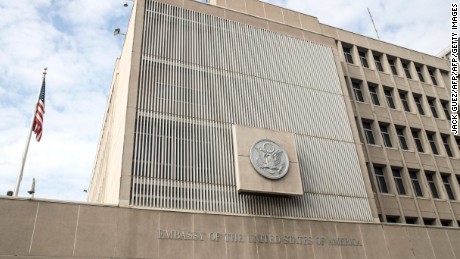 Senior Palestinian official Saeb Erekat said if the United States recognizes Jerusalem as the capital of Israel it will be "disqualifying itself to pay any role in any initiative towards achieving a just and lasting peace" between Israelis and Palestinians. Any such move, Erekat said in a statement, "would promote international anarchy and … contribute to the further destabilization of the region." The statement added that Palestinian President Mahmoud Abbas had been speaking with several world leaders to encourage them to appeal to Trump not to create "a new political reality." Erekat also suggested there would be a clear response from the Palestinian leadership to any move by Trump on the status of Jerusalem, saying "the Palestinian leadership is going to meet soon in order to approve necessary steps in case such an announcement is made."Palestine Liberation Organization Executive Committee member Hanan Ashrawi strongly cautioned against recognizing Jerusalem as the capital of Israel and relocating the US Embassy to Jerusalem."It is our hope that saner voices will prevail and that the US administration will refrain from plunging the whole region into a new cycle of chaos and violence," Ashrawi said in a statement."By violating the legal status of Jerusalem, including numerous UN resolutions and longstanding US policy, this administration is undermining the global rule of law, as well as American standing, credibility, security, and interests around the world," the statement added.Jordan's foreign minister, Ayman Safadi, tweeted that he spoke about the proposed recognition of Jerusalem as Israel's capital with Secretary of State Rex Tillerson."Such a decision would trigger anger across #Arab #Muslim worlds, fuel tension & jeopardize peace efforts," he tweeted.Moving the US embassy in Israel from Tel Aviv to Jerusalem was a staple of Trump's campaign promises, with the then-candidate saying in a March 2016 address to the American Israel Public Affairs Committee, "We will move the American embassy to the eternal capital of the Jewish people, Jerusalem."