"I was informed that he was badly shot by North Koreans," Lee said, reliving the complex chain of events that brought North Korean defector Oh Chong Song to his trauma unit on November 13.Lee says he went to meet his critically injured patient on the helipad, just a few hundred feet from the state-of-the-art, US-modeled trauma center he runs at Ajou University Hospital in the South Korean capital, Seoul. The chopper was coming in fast, and for that, he says, he was thankful."His vital signs were so unstable, he was dying of low blood pressure, he was dying of shock," Lee said. "He was like a broken jar. We couldn't put enough blood into him."

Video provided by the Ajou University Trauma Center shows Oh being loaded off a helicopter.

The 24-year-old had been shot around five times by his fellow North Korean soldiers as he made his daring escape across the line that divides North and South Korea. Riddled with bullets, he was dragged to safety by South Korean soldiers and hovered close to death during the 25-minute airlift to hospital.What unfolded after the Black Hawk touched down was a harrowing effort to keep Oh alive that lasted more than six hours — captured in video Lee shared exclusively with CNN, with the permission of the soldier.

Video provided by the Ajou University Trauma Center shows Oh being wheeled into a trauma room.

In the first 30 minutes, after Oh was rushed into Trauma Room One, Lee and his team worked to keep Oh breathing."He has one (bullet) through his right knee joint; the other one is the tricep muscle area on his arm, the third one was his back; chest and coming out from his shoulder," Lee said as he reviewed the video. But the worst was yet to come. During a five-hour operation to remove a bullet that had pierced Oh's intestines, Lee encountered a complication he's never seen in his20-year career as a surgeon: parasites.Lee describes working to repair at least seven wounds in the defector's perforated bowel while the white worms were squirming their way out of Oh's body. "Everything was stained with blood, but the parasite was basically a really white color and this thick, big, long and very, very hard, this kind of thing was getting out from his bowel system," Lee said. 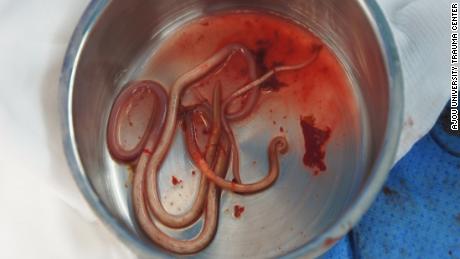 Lee describes Oh's vital signs as so unstable that a few times during the grueling operation, he thought the defector would die on the surgical table."It's a miracle that he survived," Lee said. All parasites were removed from Oh's system, some of them as long as 27 centimeters (more than 10 inches).Intestinal worms are typically transmitted through contact with feces or unwashed hands. The use of human fertilizer on crops and poor sanitary conditions can also aid the transmission of parasitic cysts. Lee appears to have grown fond of Oh during the weeks he's been treating him."I'm very proud of him. He fled from North Korea seeking for liberty, much more freedom. It's quite easy to say, but it's really, really difficult to make it happen, so I admire him," Lee said.Lee operated on Oh again two days later for more than three hours, and within days of that, the defector began a fast-paced recovery that has surprised even his doctors.

Oh is walking, talking and going to the bathroom independently. His condition, though stable, is still grave. Complications from tuberculosis and hepatitis B continue to compromise his recovery, especially his liver function. Oh is also under psychiatric care and likely to be struggling with post-traumatic stress disorder, Lee said. He's been plagued by nightmares, sometimes fearing he was still in North Korea, prompting Lee to hang the South Korean flag in his recovery room to remind him he was safe."He actually asked me, 'is it really South Korea?' And I said, 'have a look at that flag. Have you ever seen that flag in North Korea?'" It's unclear what the future holds. Oh has told his surgeon that he's interested in studying law. Lee says he has no interest in going into the South Korean military, as other defectors have done. For now, though, his condition is still so delicate that Lee says he told South Korean officials "very firmly" that they had to postpone questioning Oh. As a border guard on active duty, he's likely to have valuable information on North Korea's armed forces. 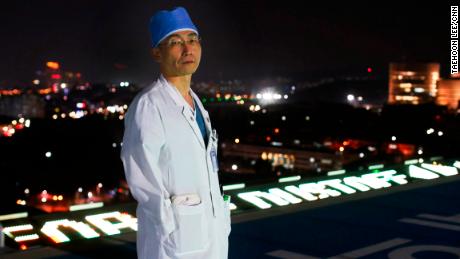 The South Korean government screens defectors for security risks and runs resettlement programs to help them adapt and integrate into South Korean society — something that can be an uphill struggle. Lee is protective of his patient, and Oh remains under heavy security in the hospital so that nothing can compromise his treatment. "If there's so many questions about his past years in North Korea. It might affect his emotional status, so if he's in depressed status, he may not be able to eat properly or recover properly," Lee said. To take his mind off the pain, Lee encouraged Oh to listen to music — he likes K-Pop group Girls Generation — and watch television. Lee says the first movie he saw was "Transporter 3," an action movie starring Jason Statham. Oh told Lee that American and South Korean TV dramas are popular in North Korea, suggesting that some people have access to outside media."I was quite surprised," Lee said. 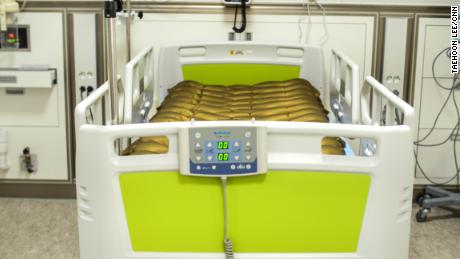 Throughout Oh's miraculous survival and recovery, Lee, a renowned surgeon who trained in San Diego, says it's been hard to not let the stress get to him. There's been intense interest in Oh's story across South Korea and by international media, and as one of the few people who has access to him, the demands for information are relentless. 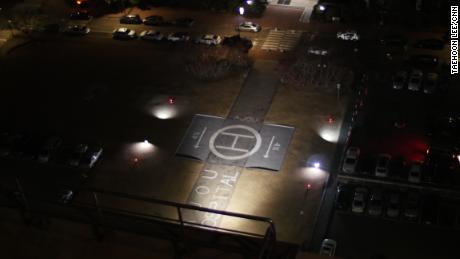 He said that while Oh's survival is a miracle, it is an outcome his team strives for every day with every patient.The tradeoff is much personal sacrifice. Lee says he goes home just one day a week, spending the rest working and sleeping in the trauma center he has nurtured for years.What he's not used to is his newfound celebrity. As we walk outside with him, he's asked to pose for a photograph within a matter of minutes. South Korea has been riveted by how he saved Oh, and Lee says he knew his country was counting on him. "People tend to say that I'm proud of my country or something, so that's why I was trying to save Mr. Oh's life, but it's totally wrong, as you can see here. We are doing this job every single day."

China or the US? Australia’s tricky balancing act

Congress sends copy of Constitution to PM Modi, says read it when you get time from dividing nation