Palestinians look at the damage at a Hamas military facility early on December 9, 2017, in the aftermath of an Israeli air strike in Beit Lahia, in the northern Gaza Strip

Israel launched fresh air strikes on the Gaza Strip on Saturday in response to rocket fire from the enclave, and the Palestinian Hamas group said two of its gunmen were killed in the bombings.

Militants fired at least three rockets towards Israeli towns from the Hamas-controlled strip on Friday, which was declared a "day of rage" by Palestinians protesting against US President Donald Trump's recognition of Jerusalem as Israel's capital.

A Hamas source confirmed that the two men killed in the strikes belonged to the group, which urged Palestinians to keep up confrontation with Israeli forces.

More than 15 injuries were reported at a hospital in the northern Gaza Strip as a result of Israeli shelling of various locations.

There were also clashes in the West Bank between Israeli soldiers and teenagers in the northern end of Bethlehem near the Israeli separation wall.

Youths threw rocks and set up makeshift barriers with metal and wood.

The developments come after two more Palestinians were killed in clashes with Israeli troops for a second day on Friday in the occupied West Bank, Jerusalem and Gaza, and scores more were wounded as anger at Trump's decision boiled over onto the streets.

Violence, anger, death: Palestinians and Israelis clash on 'day of rage' against Trump

Across the Arab and Muslim worlds, thousands more protesters took to the streets on the Muslim holy day to express solidarity with the Palestinians and outrage at Trump's reversal of decades of US policy.

Trump's announcement on Wednesday has infuriated the Arab world and upset Western allies. The status of Jerusalem has been one of the biggest obstacles to a peace agreement between Israel and the Palestinians for generations.

Israel considers all of Jerusalem to be its capital. Palestinians want the eastern part of the city as the capital of a future independent state of their own.

Most countries consider East Jerusalem, which Israel annexed after capturing it in the 1967 Middle East War, to be occupied territory. It includes the Old City, home to sites considered holy to Muslims, Jews and Christians alike. 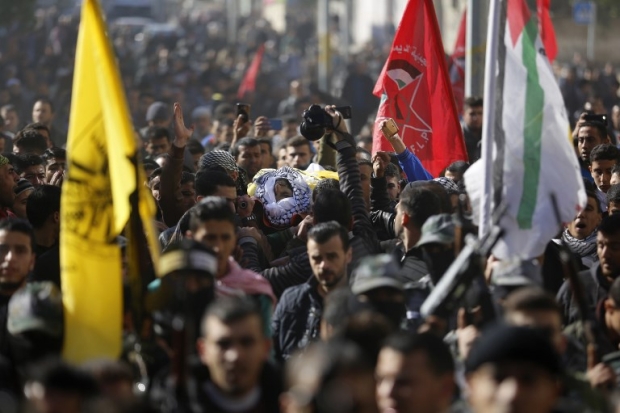 Palestinian mourners carry the body of Mahmoud al-Masri, a 30-year-old Palestinian man who was killed the previous day in clashes with Israeli troops, during his funeral in Khan Younis, in the southern Gaza Strip, on 9 December (AFP)

For decades, Washington, like most of the rest of the international community, held back from recognising Jerusalem as Israel's capital, saying its status should be determined as part of the Palestinian-Israeli peace process.

The Trump administration argues that the peace process has become moribund, and outdated policies need to be jettisoned for the sides in the conflict to make progress.

Trump also said he would fulfil his campaign promise and begin the process of moving the US embassy from Tel Aviv to Jerusalem, where no other country has an embassy.