"Because Jerusalem is under occupation, what we could not do was open our embassy there. But even now our consulate there is being represented by an ambassador"," Erdogan said in a speech Sunday to members of his AK Party in Karaman, southern Turkey. "God willing, the day is near, that our embassy will officially be opened there".Erdogan's speech came after an emergency meeting of the 57-member Organization of Islamic Cooperation last week recognized East Jerusalem as the occupied capital of a Palestinian state.The decision came in response to US President Donald Trump's promise to move Washington's embassy from Tel Aviv to Jerusalem, and recognize the city as Israel's capital. Egypt has introduced a UN Security Council resolution seeking to annul Trump's announcement, a vote on which could come as early as Monday. If, as expected, the resolution is vetoed by the US at the Security Council, Erdogan, echoed by Palestinian leaders, said he would pursue a similar resolution in the United Nations General Assembly, where a simple majority would allow a non-binding resolution to pass. Even if a General Assembly resolution is non-binding, its potential passage would show overwhelming consensus in opposition to Trump, its supporters say. Fallout from Trump's move has continued to ripple across the Islamic world. In Jakarta Sunday, tens of thousands of Indonesian Muslims took to the streets to protest the decision, waving Palestinian flags and bearing placards with slogans such as "Donald Trump, making enem(ies) at every turn." 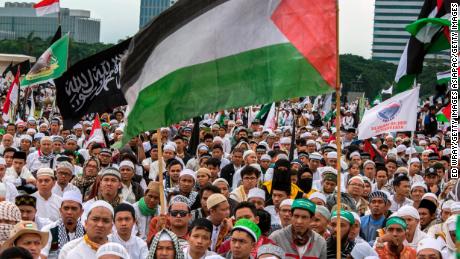 Despite many Muslim states rejecting the Trump administration as an honest broker of peace, the White House insists they are still pursuing what Trump has dubbed "the ultimate deal," a final status agreement between Israelis and Palestinians.On Friday, the White House, which has so far kept mum about its peace plan, gave the slightest hint to its formulation when a senior administration official said, "We cannot envision any situation under which the Western Wall would not be part of Israel. But as the President said, the specific boundaries of sovereignty of Israel are going to be part of the final status agreement." 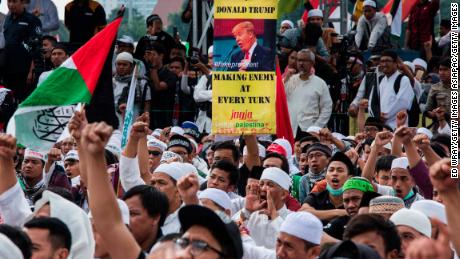 The statement was met with incredulity by Palestinian leaders."This American position proves once again that the current US administration is completely out of the peace process," a spokesman for Palestinian Authority President Mahmoud Abbas said.Nabil Abu Rudeineh added the Palestinians would not accept any changes to the 1967 border, the green line that delineates East and West Jerusalem. The Old City of Jerusalem — including the sites holy to the three Abrahamic faiths — sits in East Jerusalem.Previous negotiations have seen the sides accept — in principle — the idea of mutually accepted land swaps. The Israeli settlement blocs in the West Bank would be incorporated into Israel; in exchange, the Palestinians would receive land that is currently part of Israel. The comments from Abu Rudeineh suggest a hardening of the Palestinian negotiating position, making it harder to pursue a peace process, rather than the opposite.Jerusalem has always been the most sensitive issue in the Israeli-Palestinian conflict, with almost every square inch of territory hotly contested by multiple parties.Palestinian leaders plan on meeting Monday night to discuss their next steps beyond the attempts to pass a United Nations resolution.

Update: This story has been updated with CNN's own translation of Erdogan's speech.
Correction: An earlier version of this story incorrectly identified state broadcaster TRT as a CNN affiliate. 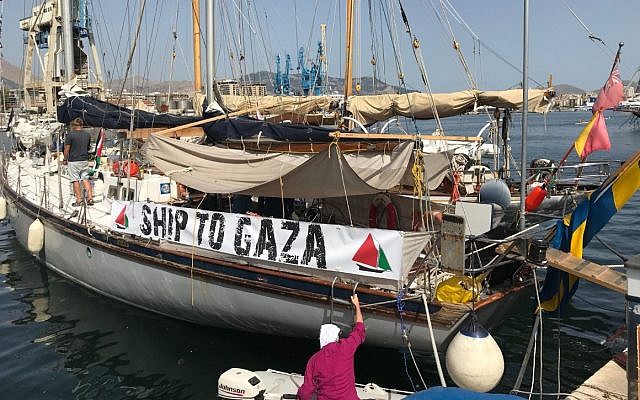