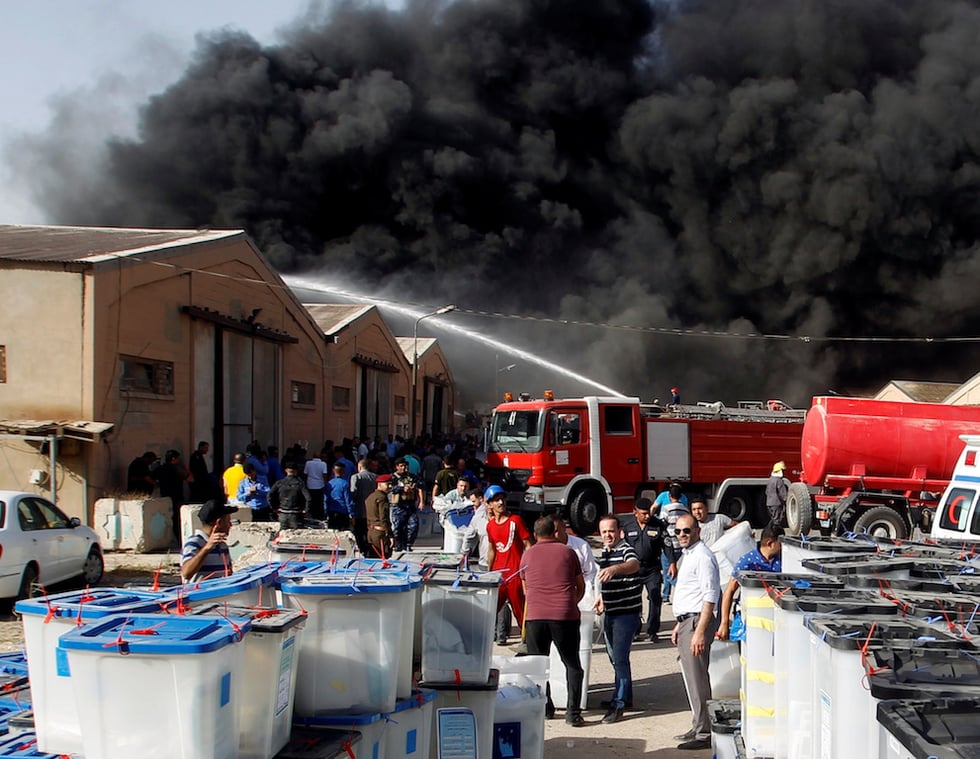 A Baghdad storage site housing ballot boxes from Iraq's May parliamentary election has caught fire and first responders are attempting to control it, a local official and the interior ministry said on Sunday.

The ballot boxes are part of a manual recount of votes from the May election, mandated in a law passed by the Iraqi parliament on Wednesday. There were conflicting accounts of the extent of the damage to the ballot boxes.

"The storage spaces housing all the ballot boxes from al-Rusafa belonging to the election commission are now on fire," said Baghdad province council member Mohamed al-Rabeei.

"Civil defence forces are on the way but I can tell you all the boxes and papers have burned."

Rusafa is a district of Baghdad on the eastern side of the river Tigris.

An interior ministry spokesman said the fire had destroyed some documents and equipment but civil defence forces were trying to prevent it from spreading to ballot boxes.

The site was divided into four warehouses, said Major General Saad Maan, and only one – housing electronic equipment and documents – had burned down. Firefighters were trying to stop the fire from spreading to the remaining three warehouses, where the ballot boxes are located, he said.

– The guy filming asks the security guard: "how many of the ballots lost in the fire?"
– The security guard all smiling: "all of them were lost".#iraqielections pic.twitter.com/Hb7GHY7pdc

"It is possible there were also some ballot boxes in the warehouse that caught fire, but most of the important boxes are in the three warehouses where the fire has been controlled," he said in a video message from the site of the fire.

Earlier on Sunday the Supreme Judicial Council, Iraq's highest judicial authority, named judges tasked with taking over the country's elections commission after allegations of widespread electoral violations in the May election.

Parliament on Wednesday passed a law that mandated a nationwide manual recount of votes from the election. The law called for the Independent High Elections Commission's leadership to be replaced by nine judges.

"The Supreme Judicial Council's meeting saw the naming of the judges nominated to take over the duties of the board of commissioners of the Independent High Elections Commission," Judge Abdul-Sattar al-Birqdar said in a statement.

The board of commissioners has said it would appeal against the law forcing the recount.

The recount was approved by parliament a day after Prime Minister Haider al-Abadi, whose bloc came third in the election, said there had been serious violations and that most of the blame lay with the elections commission.

The move could undermine nationalist cleric Moqtada al-Sadr, a long-time adversary of the United States, who also opposes Iran's sway in Iraq and whose bloc won the largest amount of seats in the election. One of Sadr's top aides expressed concerns that some parties were trying to sabotage the cleric's victory.

Kurd-Arab council ready for ‘unconditional talks’ with the Syrian government