While learning the Quran as a kid, I was taught about the five pillars of Islam, including the pilgrimage to Mecca.

Today, while I may be free to make this journey alongside millions of other Muslims, thousands of Uighurs have been jailed by the Chinese government for trying to do so.

Many people have heard about the capture of Palestine, the wars in Yemen and Syria, and the genocide against the Rohingya. Lesser known is the illegal occupation of East Turkestan by China since 1949. The land of the Uighurs and other Central Asian peoples, it was seized by China because of its natural resources.

The culture of our people is poles apart from China. After the capture of East Turkestan, Mao Zedong ordered his Red Army to deface mosques and destroy the Quran in the name of “cultural revolution”. During that time, Beijing accused Muslims of promoting “anti-socialist trends” by practising their religion.

In spite of these atrocities, the essence of Islam stayed alive in the hearts of Uighurs. As time passed, the restrictions on their lives worsened. First, China erased our countrys name by calling it Xinjiang (“new territory”), and now it is trying to erase our lives by detaining hundreds of thousands of Uighurs in Nazi-style concentration camps, where they are tortured and forced to denounce Islam.

In reality, the state is snatching away the communitys freedom and working to wipe out its Muslim identity

For Uighurs living in East Turkestan, carrying out the Hajj often remains just a dream. The Chinese government severely limits the number of passports issued to Muslims who want to undertake this journey, and those who make independent arrangements end up in jail.

According to a report by Amnesty International, Chinese authorities last year detained more than 200 Uighur Muslims for joining religious tours to the Middle East. People organising unauthorised religious travel abroad, including Muslims planning to attend the Hajj, can face fines of up to 200,000RMB ($29,000).

This year, 11,500 Muslims from China are joining the Hajj, fewer than the 12,800 who made the trip last year, according to a report from the Global Times. Many have reportedly been issued GPS trackers, allowing Chinese organisers to monitor their movements.

China has also banned religious education for young people in mosques, silenced the call to prayer and ordered the cancellation of public Arabic classes, among other sanctions. Chinas communist government has redefined extremism: it now refers to anyone who doesn't eat pork, fasts during Ramadan, wears an “abnormal” beard or a veil, refuses to watch state TV, or abstains from alcohol and tobacco. One Uighur official was punished for refusing to smoke in front of his elders. 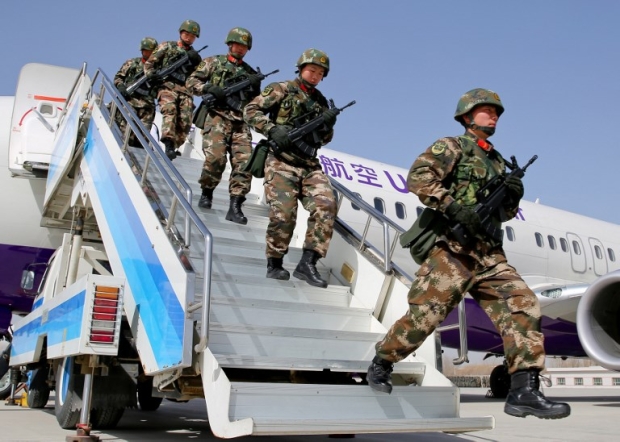 The Chinese government often justifies such inhumane practices by touting the “fight against extremism”. In reality, the state is snatching away the communitys freedom and working to wipe out its Muslim identity. This must be stopped immediately, to prevent ethnic cleansing.

Beijing is aready detaining Uighurs in re-education camps, prisons where people are told to learn communist songs and denounce Islam. They are not charged with any crime and cannot meet with lawyers. The lights reportedly remain on 24/7, while Uighurs are kept in overcrowded rooms, given very little food, and forced to march in their cells while thanking the Communist Party. They are even forced to take re-education tests, which, if failed, lead to torture and possible death.

Who will condemn this?

A recent report published by the Chinese Human Rights Defenders advocacy group confirmed that up to three million residents of northwestern Chinas Xinjiang region (East Turkestan) have been detained in political re-education camps or forced to attend “education sessions” for “de-radicalisation”.

Despite proof of torture and cruel practices by the Chinese government, few Islamic leaders have condemned its actions. Instead of standing up to Chinese President Xi Jinping, countries such as Kyrgyzstan, Egypt and even Saudi Arabia have been deporting Uighurs who managed to escape China. This is happening because of Chinas economic promises to these countries, but considering Chinas history of grants and projects in other countries, this may just be a debt trap.

While Islamic leaders have Quranic verses at the tip of their tongue, they have forgotten the real message of Allah: to help each other and fight injustice. They have forgotten that we are all obligated to save innocent lives and fight evil. I pray that Islamic nations will unite to save their Uighur brothers and sisters, who are being tortured only because they follow this path.

Photo: A Uighur woman shops at a bazaar in Xinjiang (AFP)

Shots fired at US embassy in Turkey amid diplomatic crisis