His remarks came on the same day mourners in neighboring Iraq were chanting "Death to America" at a funeral procession for Soleimani and an Iraqi militia leader who died with him in a US airstrike in Iraq Friday morning."The Americans did not understand what grave mistake they committed," Rouhani said while visiting the house of Soleimani's family in Tehran, according to a statement his office released. The strike killed Soleimani, head of Iran's Quds Force, at Baghdad International Airport, along with Abu Mahdi al-Muhandis, deputy head of the Iran-backed Iraqi Popular Mobilization Forces. At least six people were killed in the strike, an Iraqi security source told CNN on condition of anonymity.It marks a major escalation in regional tensions that have pitted Tehran against Washington and its allies in the Middle East.President Donald Trump on Friday said he ordered the death of Soleimani, one of Iran's most powerful men, to stop a war, not start one, as tensions between the two nations were already escalating.Trump said Soleimani was plotting "imminent and sinister attacks" on Americans.The Pentagon blamed Soleimani and his Quds Force for recent assaults on coalition bases in Iraq, including a December 27 strike that culminated in the deaths of an American contractor and Iraqi personnel. It also blamed him for hundreds of protesters storming the US Embassy compound in Baghdad on December 31. After the embassy attack, the US sent to the Middle East 750 troops from the Immediate Response Force of the 82nd Airborne Division. On Friday, the US announced it was sending the rest of the brigade — about 3,000 soldiers. Soleimani was the head of the Islamic Revolutionary Guards Corps (IRGC) Quds Force and became the architect of Tehran's proxy conflicts in the Middle East. 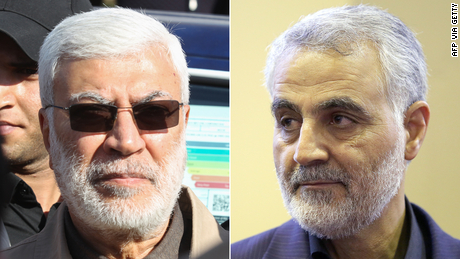 The Trump administration viewed Soleimani as a ruthless killer, and the President told reporters Friday that the general should have been taken out by previous presidents.The Pentagon blamed Soleimani for hundreds of deaths of Americans and their allies. "General Soleimani was actively developing plans to attack American diplomats and service members in Iraq and throughout the region," the Pentagon said, calling the strike "decisive defensive" action aimed at deterring Iranian attacks. Secretary of State Mike Pompeo said the strike had thwarted an "imminent" attack in the region but declined to give details. Sen. Chris Van Hollen, a Democrat and member of the Appropriations Committee, said Friday the strike will increase threats to US interests. "Today the administration announced we're sending 3,000 more troops to the region," he said. "So, clearly the administration recognizes that this action has actually dramatically increased the risks in the Middle East, increased the risks of an attack from Iran. And it should be no surprise to anybody who has followed these issues that Iran does mean what it says when it says this is essentially tantamount to an act of war."

Iran says it will fight back

During Rouhani's visit with Soleimani's family Saturday, Soleimani's daughter asked him: "Who will take revenge for my father?" "Everyone will take revenge," he replied, in video aired by Iranian state television.Iran's Supreme Leader, Ayatollah Ali Khamenei, has vowed "harsh revenge," according to a statement on his official website. "His pure blood was shed in the hands of the most depraved of human beings," Khamenei said. In a letter to the United Nations, Iran described the attack as state terrorism and an unlawful criminal act. It was "tantamount to opening a war," Majid Takht Ravanchi, Iran's ambassador to the UN, told CNN's "Erin Burnett OutFront" on Friday."The response for a military action is a military action. By whom? When? Where? That is for the future to witness," he said.He saRead More – Source Scouts: A colonial-age movement formed by Christians, cherished by millions of Muslims worldwide

US Syria pointman to also serve as anti-ISIS envoy