One of US President Donald Trumps central campaign promises was to extricate the US from extended military entanglements. Now, in light of rising tensions with Iran and Iraq, the US is sending over 3,000 additional troops to the Middle East. FRANCE 24 looks at what happened to that campaign promise when Trump ordered the January 3 assassination of Iranian General Qassem Soleimani in Baghdad.

But is it? Nearly 17 years after the United States under George W. Bush invaded Iraq, the military presence in the country has cost America around a trillion dollars and the lives of nearly 5,000 military servicemen, according to the Watson Institute at Brown University in the US. An estimated half a million Iraqis have died.

One of Trumps central campaign promises in 2016 was to extricate the US from extended military entanglements. “I campaigned on the fact that I was going to bring our soldiers home, and bring them home as fast as possible,” he said in October, after announcing that US forces would be pulled out of Syria.

Now, in light of rising tensions with Iran and Iraq, the US is sending over 3,000 additional troops to the Middle East.

What happened to Trumps campaign promise when he ordered the January 3 assassination of Iranian General Qassem Soleimani in Baghdad?

Supporters of Trumps decision say Soleimani had it coming. As the architect of Iran's military and intelligence strategy in the region for the past 20 years, he was responsible for the deaths of hundreds of American soldiers in Iraq in addition to attacks on US facilities in the country and in the Gulf.

Others suspect that the timing of the attack was no coincidence.

“If there is a Trump doctrine for his foreign policy, it is unpredictability,” says Annick Cizel, associate professor at the Sorbonne Nouvelle university in Paris and a researcher in US foreign policy.

“We need to keep in mind that Trump is running an electoral campaign. Hes not necessarily considering the international consequences of his decision as commander in chief of the US military. Hes thinking in terms of electoral gain.”

The Iraq war officially ended in 2011, when then President Barack Obama ordered the withdrawal of US combat troops, but several thousand US forces and a NATO training mission remained.

Pulling out of Iraq entirely might have been a great victory for Trump. “Hed be outdoing Obama by actually pulling all the troops out,” Cizel said.

But the US defence department is not running an election campaign. “The Pentagon, theyre doing their job, which is protecting US human resources and national interests. It seems the two missions are diverging a little bit – if we try and follow the incoherence, the many voices that are being heard out of Washington right now,” Cizel said.

But with the killing of Soleimani, Trump has found a way out of that original campaign promise while distracting from the impeachment proceedings against him in Washington.

Playing right into Trumps plan, the Iraqi parliament on Sunday voted to expel US-led coalition troops in response to the breach of Iraqs sovereignty.

Trump quickly retaliated by threatening sanctions, saying that if US troops are forced to leave, Iraq's government will have to pay Washington for the cost of a "very extraordinarily expensive" air base in the country. "We will charge them sanctions like they've never seen before ever. It'll make Iranian sanctions look somewhat tame," he said.

The possibility of withdrawal gained ground on Monday, when the Iraqis received a letter from the head of US military forces in Iraq, Brigadier General William Seely, saying the US forces would begin preparing for a pullout.

But this was quickly denied by US Defence Secretary Mark Esper and Trump himself, who insisted there were no such plans.

"At some point we want to get out, but this isn't the right point," Trump said on Tuesday. "If we leave, that would mean that Iran would have a much bigger foothold, and the people of Iraq do not want to see Iran run the country. That I can tell you," Trump told reporters.

How Iran gained a foothold in Iraq

The initial 2003 invasion, based on incorrect intelligence information about Iraqs alleged possession of weapons of mass destruction and the Baathist partys supposed ties to al Qaeda, led to a decade-long insurgency by militias and foreign groups opposed to the US-led coalition, and to the long series of provisional Iraqi governments that followed.

The US had overthrown Saddam Hussein and banned the Baath party, ending a decades-long dictatorship and creating a political vacuum. The Iraqi military was also disbanded, leaving a security void, with hundreds of thousands of troops feeling abandoned.

>> THE INTERVIEW: Former US special envoy to Iraq Paul Bremer defends his record following the 2003 invasion

In 2005, after the initial transition period that followed the war, Iraqis voted on a new constitution, which, among other things, promised to protect individual rights, also for religious and ethnic minorities.

After centuries of Sunni domination, a Shiite prime minister was instated. Iraq also got its first Kurdish president.

US troops pulled out in 2011, but were sent in again in 2014 – this time at the invitation of the Iraqi government, following the rise of the Islamic State (IS) group in the region.

“ISIS (an alternative acronym for the IS group) emerged as a potent, long-term threat – not just a movement, but a powerful contender – and not just in Syria and Iraq, but potentially in the entire region and globally,” Cizel said.

The rise of the IS group had to be balanced with the relationship with Iran. “This balancing act places Iran as a foil to ISIS, and places Iran in the position of a truce with Washington, a sort of neutrality zone in their long history of enmity,” Cizel said.

The new American-led global coalition to defeat ISIS was made up of 79 countries – and institutions like the Arab League, NATO and the EU – and it relied on the help of Iran.

“It creates an ironic truce then, because Iran is a bulwark against ISIS. We share a common enemy, which is the primary, short-term immediate emergency enemy, and therefore, at a time when Obama was negotiating the JCPOA [The Joint Comprehensive Plan of Action known commonly as the Iran nuclear deal] with Tehran, it ironically enabled Iran to become a regional power again,” Cizel said.

“Thats the irony of the 21st decentralisation away from nation states to those transnational movements like ISIS.”

Last October, Iraqis took to the streets to protest against Irans increasing control over the country.

The demonstrations were so virulent that Iraqi President Barham Saleh said he was “ready to resign” rather than appoint the candidate of a pro-Iranian coalition for the post of prime minister. The protests spread all the way to the overwhelmingly Shiite south of the country, where the Iranian consulates in the holy cities of Kerbala and Najaf were among the tarRead More – Source

UN raises alarm over latest wave of displacement in Idleb

Ukrainian Boeing plane crashes in Iran shortly after takeoff, killing 176 on board 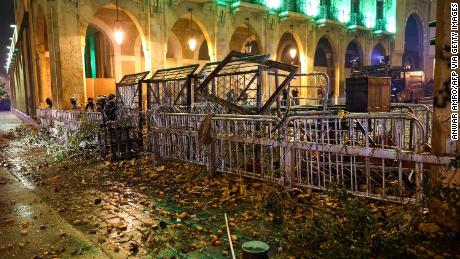