Photos and videos from the scene on Monday in the Iranian city of Mahshahr show the Caspian Airlines plane grounded in the middle of the road, with traffic banked up and pedestrians on either side. The plane, lying flat on its belly, appears largely undamaged.Passengers appeared to help each other out of the twin-engine, single-aisle commercial jet, carrying children and suitcases. Some left through the main doors, while others climbed out emergency exits onto the plane wings.Emergency responders soon arrived on the scene, with firefighters spraying water onto the plane. 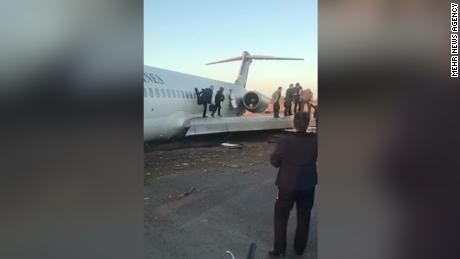 All 135 people on board were unharmed and evacuated safely, reported semi-official news agency Fars, attributing a spokesman for Iran's civil aviation agency, Reza Jafarzadeh.Caspian Airlines Flight 6936 departed from the capital city, Tehran, early Monday and was set to land at Mahshahr Airport, in the country's southwest, when it skidded onto Mahshahr-e-Ahwaz highway, according to Fars. Read More – Source Child nurseries a first for Hajj