You may think that the days when old-fashioned Arab dictators announced that they won presidential elections by 99 percent of the votes are gone. You are mistaken. Saudi Crown Prince Mohammad bin Salman joins a long list of emirs and sheikhs eager to inform us about how popular he is.

The night of the long knives in Saudi Arabia

We are informed that 94.4 percent of Saudis approve of his performance in social, political and economic areas of policy only five months after he became crown prince.

Here the magic of numbers and time are presented to the public as scientific assessment of public opinion. But I am not sure why the approval percentage drops from 94.4 percent to 92 percent when Saudis are asked whether he is the godfather of reform.

Furthermore, notice how the percentage drops to 91.75 percent approval rate for gender reform and a sharp dramatic drop to 80.02 percent when people are asked to assess the level of affluence associated with Muhammad ibn Salman’s programmes for rafahiyah (affluence and wellbeing).

It is amazing that someone like MBS, who rules by an iron fist, still needs to bother to commission surveys that result in absurd numbers

But wait a minute! All these numerical tricks are not enough unless they lead to the old magical figure. According to the Saudi survey, 99 percent of surveyed Saudi men and women across the various regions who are above 18 years old think that Mohammed bin Salman established domestic stability and security.

Today with the help of PR companies and market research, absolute monarchs endowed with great wealth are able to improve the old-fashioned propaganda and make it more sophisticated. They unsurprisingly claim to scientifically document the pervasive appreciation of their policies among their disenfranchised subjects.

There is no limit to the fallacy of magical numbers.

But Mohammed bin Salman’s PR machinery is lagging behind as the audiences have truly gone beyond the magical 99 percent number and expect more sophisticated ways to assess approval ratings.

Elections, parliaments, and elected governments are the language of the day but MBS, as he is known, is still following the old Stalinist magical propaganda. Governments' performance is now measured by serious output indicators and the personal popularity of one individual is put to the test only in national elections – if they are not rigged and distorted.

It is amazing that someone who rules by an iron fist still needs to bother to commission surveys that result in absurd numbers such as the above.

With this iron fist, the crown prince has eliminated royal opposition to his rule for the time being, silenced potential critics from all walks of like, detained hundreds of intellectuals, clerics and professionals, and most importantly concentrated all powers, means of coercion and media in his own hand.

It feels like a battlefield these days in Saudi Arabia

Today even autocrats, such as the one currently in charge of Saudi Arabia, need the semblance of consensus. A royal family that was keen to maintain a balance between the carrot and the stick had ruled the country for several decades.

This does not apply only to how the royal family had managed its relations with society and the multiple voices from religious establishment to modern intellectuals, but also in the way it dealt with its own aspiring members. 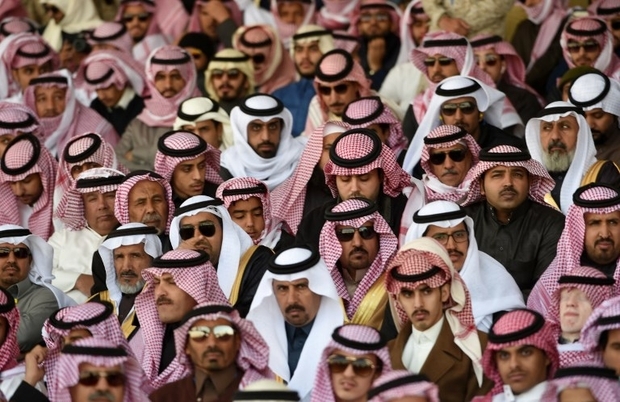 Mohammed bin Salman has truly alienated his own uncles and cousins, all have gone silent after the wave of detentions. Currently he is not seeking consensus but consolidation. The time of consensus is actually gone forever and his recent oppressive measures, conducted under the guise of the war on corruption, prove that he has totally abandoned the carrot.

While multiple sticks are being brandished at the Ritz Carlton and a kind of diyya, blood money, is being negotiated with the detainees to liberate their necks from a fatal end, MBS clings to the magic of surveys.

He is seeking to find refuge in the so-called youth cohort that is allegedly in total agreement and appreciation of his infitah (openness), and religious and economic policies that promise to bring development and even magical outcomes that benefit all.

It is important for him at a time when he still cannot take for granted the consensus within his own family, especially the big names of Mohammed bin Nayef and Miteb bin Abdullah, not to mention the financial tycoons such as Waleed bin Talal, to popularise surveys with limited value.

Autocrats are always compelled to seek the feel-good factors, and so-called scientific surveys are meant to generate a certain unrealistic euphoria even if they are not convincing. They circulate in the public sphere for a short period then sink into historical oblivion. Then new ones are commissioned and the results are the same.

Unfortunately, this kind of survey is meaningless in authoritarian and repressive contexts. When critical opinions are criminalised in a stifling way and those who articulate alternative visions are treated like traitors, terrorists and dissenters, it is meaningless to think that surveys generate sound and accurate results.

If PR companies masquerading as research centres conduct such surveys, they are better considered a sort of propaganda that fails to yield convincing results.

For Saudi Arabia, it's been operation shoot yourself in the foot in Yemen

The loneliness of autocrats is notorious. And even a powerful crown prince aspiring to become king like Mohammed bin Salman needs this kind of propaganda to compensate for such loneliness.

When you are all alone at the top and cannot even trust your own kinsmen, seeking approval from society can be an alternative comforting trick.

Autocrats need to hear their own voice and propaganda to convince themselves that "they all love me", a statement that we came to hear more from Arab dictators during their dark moment in 2011 when people took to the streets to show how they detested rather than loved them.

– Professor Madawi al-Rasheed is a visiting professor at the Middle East Centre at LSE. She has written extensively about the Arabian Peninsula, Arab migration, globalisation, religious transnationalism and gender. On Twitter: @MadawiDr