PARIS: Saudi Aramco and the French oil giant Total signed an agreement on Tuesday to build a vast petrochemical complex in Jubail.
In total, $9 billion will be invested, creating 8,000 jobs in the Kingdom.
The deal was the highlight in a series of agreements between Saudi Arabia and France which rounded off a CEO business forum in Paris on the final day of Crown Prince Mohammed bin Salmans official visit.
The two countries made agreements worth $18 billion, rubber-stamped by top representatives in a mammoth signing ceremony.
The final day of the crown princes visit shifted from building relations over culture and heritage, to business and finance. Accompanied by stirring music, business chiefs from several French companies mounted the stage for a theatrical exchange of documents in a building that once housed the national printworks but is now an offshoot of the French Foreign Ministry.
The crown prince met French Minister of Economy and Finance Bruno Le Maire, who was accompanied by a number of French businessmen.
They discussed enhancing partnership and investment opportunities, including attracting promising investments aimed to localize technology and training Saudi nationals, the Saudi Press Agency reported.
Fifteen memorandums of understanding (MoUs) were signed by Saudi and French companies at the CEO Business Forum. They included agreements between Saudi Arabias SABIC and Frances Schneider Electric on energy management, and SABIC and Orange on transfer of technology.
Al Arabia signed an investment agreement with multinational advertising giant JCDecaux; Axens, a global leader in converting oil, coal and natural gas to clean fuel, has struck a deal with Saudi refining and petrochemical company Petro Rabigh, and water management company Saur now has an agreement with a Saudi counterpart, International Aramoon Company Limited.
Saudi Aramco announced commercial cooperation worth a total of $12 billion with French firms.
These included deals with Veolia and Dussur for industrial wastewater treatment and a corporate purchase agreement signed with TechnipFMC for wellhead and surface-control equipment.
Several other agreements were also signed with Suez and Dussur, the Arab World Institute and the Pompidou Center.
“With Vision 2030, I believe there are more opportunities for collaboration and partnerships, not only in the oil and gas sector but also in infrastructure, manufacturing and services industries, which are critical to manage and operate an enterprise like Saudi Aramco,” said Aramco President and CEO Amin H. Nasser.
Meanwhile, Saudi Finance Minister Mohammed Al-Jadaan told AFP that Aramcos hotly awaited stock market debut would be launched in 2018 if market conditions permit, otherwise in 2019.
“If the market is ready in 2018, we will go in 2018. If not, we will wait until 2019,” he said.
Saudi Energy Minister Khalid Al-Falih and French Foreign Minister Jean-Yves Le Drian inaugurated the CEO event, which was organized by the Saudi Center for Strategic Partnerships.
Le Drian highlighted 50 years of relations between Saudi Arabia and France and the importance of enhancing security, stability, energy, economy, science, culture and technology between the two countries.
He said France is the third biggest foreign investor in the Kingdom after the US and Kuwait, and that 80 French companies are operating in Saudi Arabia with more than 27,000 Saudi jobs, of which 20,000 are in the energy sector.

French Council of the Muslim Faith: KSA is the incubator of Islam and Muslims

Princess Reema: Mothers are grateful for what Saudi Vision 2030 will bring their daughters The Middle East at the UN: Palestinians retaliate against Trumps ‘open war’ 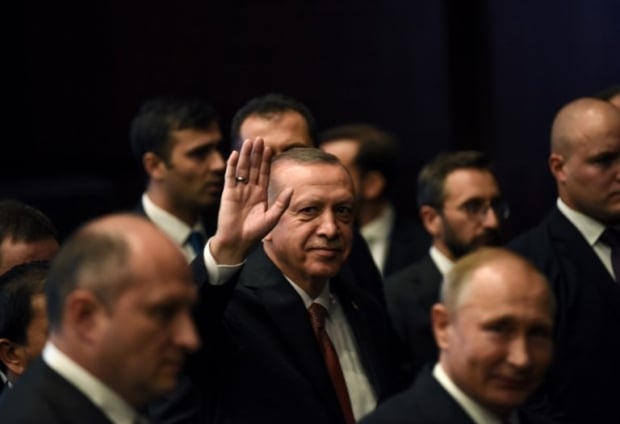 The smell of betrayal hangs over Trump’s Syria withdrawal