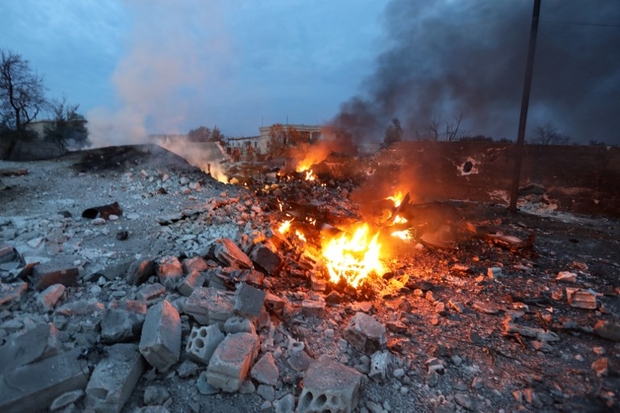 Air strikes in northwestern Syria on Thursday killed 18 civilians, including two children, while the Islamic State (IS) group killed 22 pro-government fighters in the south, a Britain-based monitor said.

The air strikes, which hit a residential zone in the area of Zardana in the northwestern province of Idlib, also wounded 50 people, the Syrian Observatory for Human Rights said.

During the IS attacks in the southern provience of Sweida, the monitoring group said that 12 militants were also killed.

These were the first attacks of their kind in the area, where no IS presence had been noted for more than a year, Observatory head Rami Abdel Rahman said.

The monitor says it relies on sources inside Syria for its information, and determines who carried out strikes according to flight patterns, as well as planes and ammunition involved.

The toll from the air strikes is likely to increase because of victims still under the rubble, Observatory head Rahman said.

An AFP correspondent at the scene of the strike described a large crater in the midst of several wrecked two- and three-storey buildings.

At a nearby hospital, women, children, elderly people and rescue volunteers where among the wounded, the correspondent said.

Most of Idlib province lies beyond government control and is held by an array of rebels and militants.

Zardana is largely controlled by Islamist rebels, with a small presence of the Hayat Tahrir al-Sham alliance led by Syria's former Al-Qaeda affiliate.

Since Russia intervened on its side in 2015, the Syrian government has regained control of about half of the country.

More than 350,000 people have been killed in Syria's war since it started in 2011 with the brutal repression of anti-government protests.

IS has ramped up its attacks against pro-government forces since its fighters left their last stronghold near Damascus in May under an evacuation deal with the government.

The new toll brings to 184 the number of pro-government troops killed in more than two weeks of militant attacks across the country since 22 May. At least 92 militants were killed during that same period.

IS in 2014 proclaimed a cross-border "caliphate" in Syria and neighbouring Iraq, but has since lost most of that territory to separate offensives by Russia-backed Syrian government troops and a US-backed Kurdish-Arab alliance.

The militants now control no more than three percent of Syria, the Observatory says, mostly in the eastern desert near the border with Iraq.

Earlier this week, IS assaults in the eastern province of Deir Ezzor killed 45 pro-government fighters.